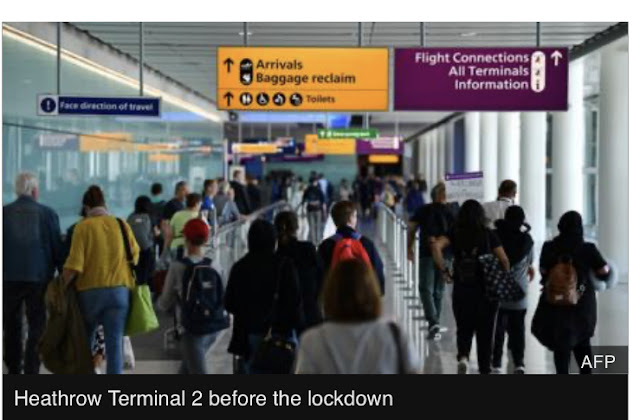 TAXI LEAKS EXTRA BIT UP FRONT !!!
Spoke to my neighbour who works at Heathrow yesterday and she told me she’s been furloughed.
She also said terminals 3 & 4 are closing for the foreseeable future (except for skeleton security staff).

Apparently all non fourloughed staff are being moved to over to T5.

She went on to say that terminal 3 is not likely to reopen until late winter 2020. Terminal 4 ie now closed after its last flight last night and us anticipated not to be reopening until the summer 2021.

This from BBC News on-line
Introducing social distancing at airports is "physically impossible", the boss of Heathrow has warned.

But the chief executive of Europe's busiest airport said airports will have to introduce health-screening and passengers will have to wear masks.

However, the GMB union said the airport must enforce social-distancing to protect staff and passengers.

The union said workers fear contracting the coronavirus from passengers returning from countries where Covid-19 is prevalent. In the past two weeks three GMB members working at Heathrow have lost their lives to the coronavirus.

'Screening'
In an interview with the Press Association news agency, Mr Holland-Kaye said: "It's just physically impossible to socially distance with any volume of passengers in an airport."

In a separate interview, with the BBC, Mr Holland-Kaye said that until a coronavirus vaccine could be developed, airports would have to introduce measures to minimise infection once lockdowns started to ease.

"This might include some kind of health screening as you come into the terminal so that if you have a high temperature, you may not be allowed to fly," he said.

"As you go through the airport, you will probably be wearing a face mask, as people from Asia have been doing ever since Sars (virus) came out."

Ryanair chief Michael O'Leary backed the call for temperature checks. "Anybody with a temperature of over 38 degrees will be refused entry," he told the BBC.

Meanwhile, EasyJet has suggested it could leave the middle seats on its planes empty when flights resume.

Enforcing distancing
The GMB has called for urgent action to protect Heathrow airport workers after an over-crowding incident this week. On Tuesday, two flights arrived at the same time from the same country, the union reported.

It said Heathrow allocated just one conveyor belt for up to 500 passengers waiting to collect their bags.

"Enforcing social-distancing is essential if our members and airport passengers are to feel that their lives are more important than money," he said. 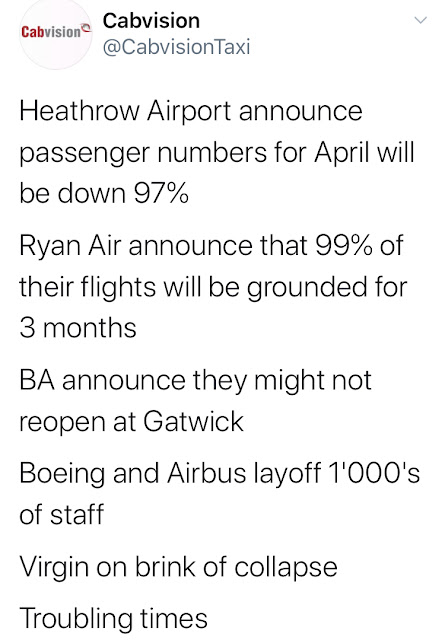 Posted by Editorial at 9:46 PM No comments:

The union said the decision to ban the key workers from the right to free travel despite the current crisis was dismissed via a “short and blunt letter.”

RMT general secretary Mick Cash said: “It is nothing short of a scandal that thousands of Tube cleaners who have put themselves right on the line, working round the clock in risky conditions to keep London’s essential workers moving, are being denied free travel on the transport network in the midst ‎of this pandemic crisis.

“Those responsible for this disgusting and disgraceful decision should be hanging their heads in shame and I am demanding the London Mayor Sadiq Khan take immediate action to right this wrong, which casts a stain across the capital city.”

TfL had not responded to the Star’s request for comment at the time of publishing.

In separate remarks Mr Khan said TfL could be forced to cut services unless it receives government funding in the coming days, as it has lost hundreds of millions of pounds of revenue due to the lockdown.

A Transport for London (TfL) spokesperson said: “Key workers including cleaners on the transport network are doing an amazing job in these extraordinarily difficult times, and TfL is very grateful for everything they are doing.

Following discussions, cleaners now have the ability to self isolate with full pay so that they don’t feel forced to attend work for financial reasons.

“As of Monday of this week, all customers on London buses are no longer required to touch in at the start of their journey as we are currently running middle door only boarding to help enable better social distancing for our drivers.

We hope that this temporary change will benefit all key workers, including London’s cleaning workforce.

“The drop in passenger numbers – 95 per cent on the Tube and 85 per cent on the bus network - as a result of TfL doing the right thing to prevent the spread of coronavirus is causing huge financial challenges for TfL and negotiations are ongoing with the Government to secure a grant to enable TfL to continue operating services.

Given this extremely difficult financial backdrop, it is not currently possible for TfL to consider adding new travel concessions.” 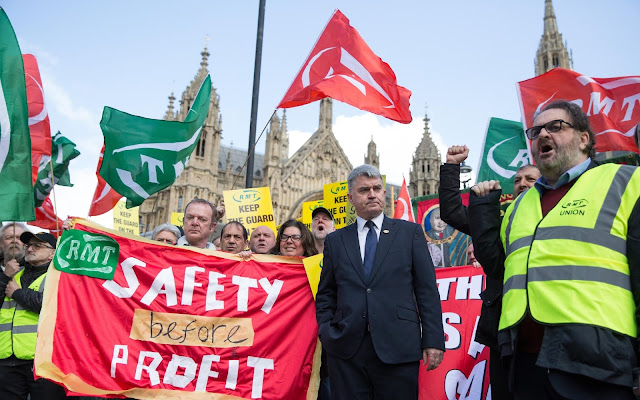 It’s a catch 22 situation as the reason given was always “the London Taxi branch doesn’t have enough members”.

But then drivers wouldn’t join because of the lack of support from the main union.
Posted by Editorial at 9:42 AM No comments: