Tube Passenger Hits Out At Sadiq Khan's Claim That Carriages Are Regular Cleaned, Using Her Own Wet Wipes

A LONDON tube passenger was so disgusted with her filthy carriage that she cleaned it up herself - only to be confronted with horrifying results. 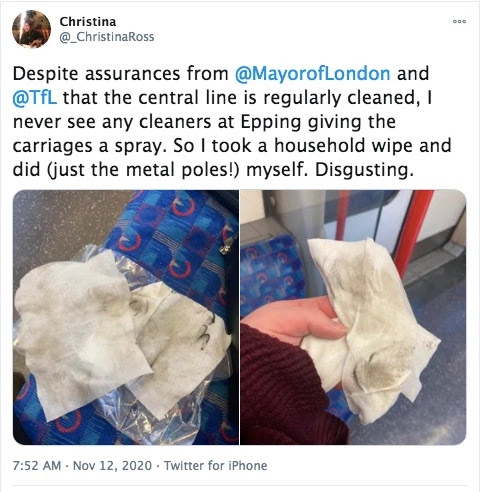 Christina Ross, 27, was travelling via the underground from Epping, Essex, to her workplace in Holborn, central London last week when she noticed how dirty her surroundings were.

Disgusted by the state of the seats and carriage, she whipped out some wipes and rubbed down the poles between seats, which left behind a dark grey residue.

Christina tweeted: “Despite assurances from MayorofLondon and TfL that the central line is regularly cleaned, I never see any cleaners at Epping giving the carriages a spray.

“So I took a household wipe and did (just the metal poles!) myself. Disgusting.”

“I’ve been back to work and commuting (to an essential business!) for a month now, and the only person I’ve seen is one man picking up the papers at the end, nothing else. How is this safe?," she continued in a separate tweet.

"New Zealand are tracing cases to the ten minute period between a lift button being pressed by someone contagious and that button being cleaned - and we can’t even put a bit of antibacterial wipe on a metal pole that hundreds of people will touch in a day.” 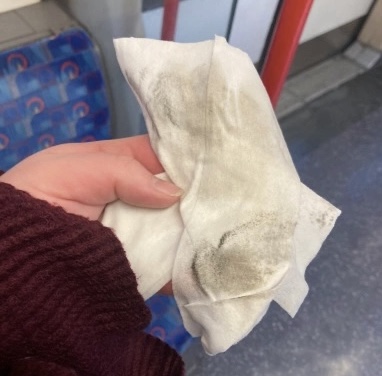 She now hopes the transport provider will up its cleaning regimes across the tube network.

She said: "I’m fuming. I get on the Central line at Epping, so the end of the line and the place you would expect these tubes to be cleaned.

“I have only seen one man collecting papers, NO cleaning."

The discovery comes after TfL earlier this year introduced an enhanced cleaning regime, using additional cleaning substances like those used in hospitals that kill viruses and bacteria on contact.

It claims it cleans key interchanges throughout the day with disinfectant that kills germs on contact and says it frequently wipes down all regular "touch point" areas such as poles and doors every day.

TfL even says it uses UV light to clean the handrails on escalators at Heathrow T123 Tube station, while more than 200 sanitising devices have been added to over 100 escalators across the tube network. 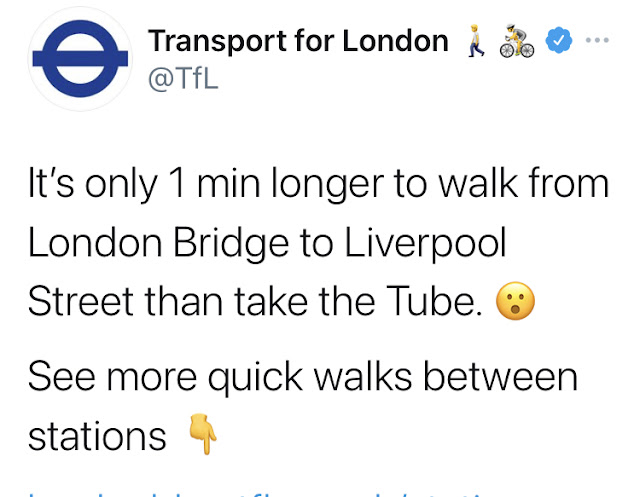 Its raining and getting cold, and TFL want you to walk, ask them who gets driven around in a £300K Range Rover ?? 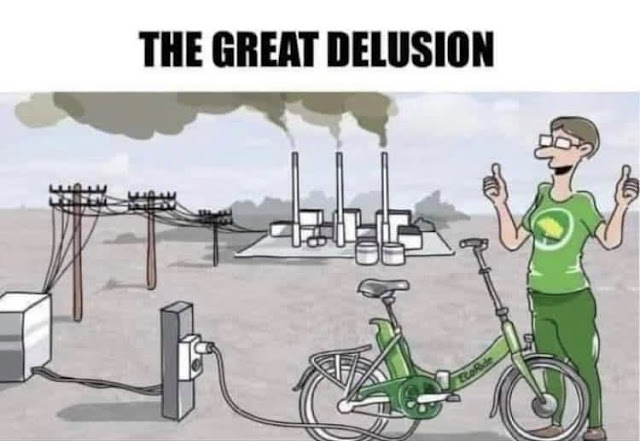 Posted by Editorial at 9:45 AM