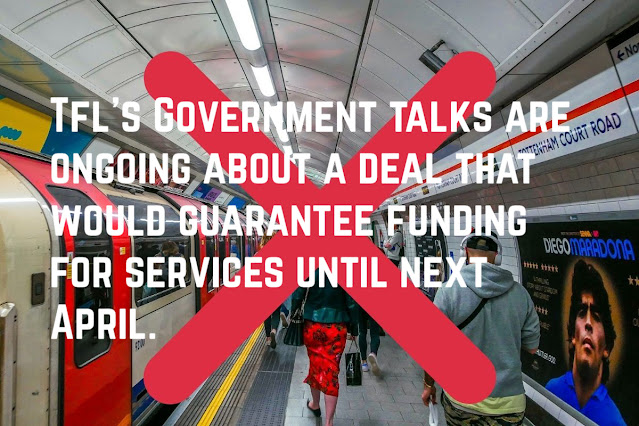 The government and London's transport bosses are locked in talks about a six-month funding deal hours before the capital's bus and Tube networks face the renewed threat of financial collapse.

Sky News understands that the Department for Transport (DfT) and Transport for London (TfL) - which is chaired by the London mayor, Sadiq Khan- are negotiating a number of options, including a bailout deal that would guarantee services until next April.

Under one potential agreement that was being discussed on Friday morning, funding likely to be worth between £1.5bn and £2bn would be provided to TfL by the government.

One possible condition attached would involve amending the terms on which children can use London's transport network for free, according to a Whitehall insider, although the details remained fluid and subject to significant change.

It remained possible that no deal would be reached before a deadline on Saturday night.

The latest round of negotiations, are aimed at preventing TfL from being plunged into an even deeper crisis that would be triggered by the filing of a Section 114 notice - a process which would effectively declare it insolvent, and lead to services being severely curtailed.

A two-week extension to TfL's funding was granted earlier this month amid an increasingly bitter row between Mr Khan and ministers including the transport secretary, Grant Shapps.

The Financial Times reported last week that the government had threatened to take direct control of TfL unless the impasse was resolved - an option that is said to remain on the table.

A TfL spokesperson said: "We continue to discuss our immediate funding requirements with the government and hope these discussions can be concluded successfully soon, so we can help London through this next phase of the pandemic.

"We are doing what we can to minimise costs and aim to continue operating a full service across our network while our funding discussions continue."

A mayoral spokesman said the government "needs to give TfL a deal that will allow TfL services to continue, and that works for Londoners".

The DfT declined to comment on the progress of the talks beyond the fact that they were ongoing.

A Whitehall source said a deal could be announced after a TfL board meeting later on Friday but cautioned that key details had yet to be finalised.

The financial strain on TfL, which is expected to lose £4bn this year, is posing an early test for Andy Byford, the authority's new commissioner, who stepped down from the equivalent role in New York earlier this year.

The transport authority put 7,000 of its staff on furlough earlier this year, and has halted hundreds of construction projects in a bid to save money.

It has asked commuters to "reimagine their journeys where possible", including walking or cycling as alternatives to public transport.

Posted by Editorial at 1:53 PM