Ealing Council Boss To Face 2nd Challenge To Leadership With No-Confidence Vote, After Legal Action From Residents Over LTNs 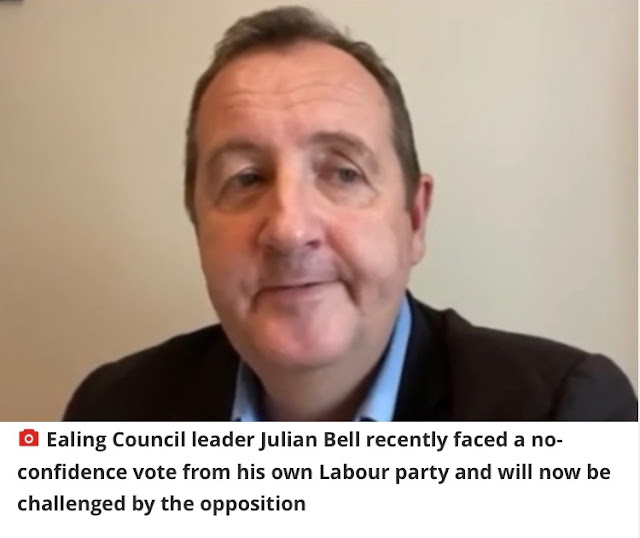 Ealing's Labour council chief Julian Bell will face another challenge to his leadership as the Conservative opposition group has called for a vote of no confidence.

Cllr Bell faced a showdown on Monday, September 28, from members of his own party, surviving a vote of no confidence by just 28 to 27 votes, and one abstention.

But now, Ealing’s Conservative group has called for an extraordinary full council meeting to be held to allow councillors across the political spectrum to have their say on his position.

The bid comes amid continued controversy over the introduction of Low Traffic Neighbourhoods (LTNs) in the borough.

On September 25, cllr Bell and transport boss, cllr Mik Sabiers, were forced to apologise for not consulting with the London Ambulance Service earlier on in the process which brought criticism on all sides that residents’ lives could have been put at risk.

Applications of judicial review have been submitted over four of the LTN schemes, in West Ealing, Mattock Lane, Loveday Road and East Acton.

It is believed the legal challenges have been submitted by representatives from campaign groups, Ealing Residents Against Low Traffic Neighbourhoods and Coldershaw and Midhurst Traffic Action Group.

A statement from Ealing Residents Against Low Traffic Neighbourhoods said: “On Tuesday September 29, we filed an application for a Judicial Review in the High Court against four of Ealing Council’s LTN orders. We believe the council has acted illegally and the procedure they have and continue to follow is unfair.

“The council now has approximately three weeks to respond to us. We hope the council, having admitted it did not follow the correct procedure, reconsiders its position and rather than waste public money fighting residents, reverses the LTNs and engages in a democratic discussion about what the Ealing public want.”

An Ealing Council spokesperson confirmed the authority had received the legal challenges.

“We will be seeking legal advice and considering our response.

As legal action is pending we are unable to comment further,” they added.

In a letter to the mayor of Ealing on October 5 requesting the extraordinary meeting, the Conservative group also called for a vote on the LTNs to suspend the programme until a proper consultation with residents is had.

The letter read: “We request that the business of that meeting be a debate on the two motions attached below. We will be asking for a recorded vote on both motions.

“The first is regarding the Low Traffic Neighbourhood (LTN) Schemes which have been deeply controversial with local residents, have led to significant protest and for which the council itself has admitted it did not follow its legal duty to consult all the emergency services.

“The second is a no-confidence motion in the leader of the council. The Labour Group held a private and secret ballot on whether they had the confidence in the Leader which he only won by a single vote. It is time that all councillors had the opportunity to register their lack of confidence (or otherwise) in the leader in a public and open forum.

“In both motions, time is of the essence and both require the time for proper debate without the numerous other items of business that a regular full council meeting must contain.”

The meeting date is yet to be confirmed.

An Ealing Council spokesperson said: “We can confirm the council has received a letter requesting an extraordinary meeting of full council.

"That meeting will take place within the next few weeks, on a date to be agreed following consultation with the three party whips.”

Posted by Editorial at 1:24 PM