To mark the 75th anniversary of VJ Day on Saturday 15 August, the Taxi Charity for Military Veterans is delivering specially commissioned VJ Day commemorative tins, filled with sweets and a miniature or two, to WWII veterans.

The charity delivered tins earlier this year to commemorate the 75 anniversary of VE Day and received so many phone calls from veterans thanking them for thinking of them during lockdown that they wanted to replicate the idea for VJ Day, for all their WWII veterans including those who served in the far east and are often known as the “forgotten fleet” or “forgotten army.”

Dick Goodwin, Vice President, Taxi Charity for Military Veterans, said, “The Taxi Charity had a commemorative VJ Day tin specially designed for WWII veterans for the 75th anniversary featuring a work by war artist Thomas Dugdale. The tins are being delivered to local veterans by volunteer London Cabbies and the tins for those who live further away have been posted. With most VJ Day events having to be cancelled, it is our way of letting all our WWII veterans know we are thinking of them on this very important anniversary.”

The picture of a “Chindit” on the tin was painted by Royal Academy war artist Thomas Dugdale and the original image was given to Mr and Mrs Goodwin by Captain Maurice Wiggal from the 6th (Queen Elizabeth’s Own) Gurkha Rifles.

This beautiful illustration appeared on the 28th May 1945 cover of ‘Victory’ the weekly for India Command. The name ‘Chindit’ was suggested by Captain Aung Thin, DSO of the Burma Rifles. Chindit being a corrupted form of the Burmese mythical lion-like creature, Chinthé or Chinthay, which traditionally guarded Buddhist temples.

If you know of a veteran whose life might be enriched by joining the Taxi Charity family, please visit www.taxicharity.org

About VJ Day
Victory over Japan Day (also known as V-J Day, Victory in the Pacific Day, or V-P Day) is commemorated on 15 August, the day on which Imperial Japan surrendered in 1945, bringing the war to an end.

About Thomas Dugdale
1880 - 1952
Was a member of the Royal Academy, a renowned portrait painter and served as a war artist during both World Wars One and Two. Born in Blackburn, Dugdale studied art at the Manchester School of Art, Royal College of Art and in Paris, first exhibiting at the Royal Academy in 1901 and continuing to do so until his death in 1952.

He enlisted in the British Army in 1910 and served as a Staff Sergeant in the Middlesex Yeomanry in Egypt, Palestine and Gallipoli during World War One, continuing to paint while on active service.

During World War Two, Dugdale lived in Suffolk where he organised a Home Guard unit.
Throughout the war, from July 1940 to July 1945, Dugdale received portrait commissions from the War Artists' Advisory Committee to depict several merchant seaman and RAF pilots. In addition to his paintings, Dugdale designed covers and woodcut illustrations for books and textiles.

His work appears in the collections of the Royal Academy, IWM, The Tate and the National Portrait Gallery.

This illustration of a Chindit appeared on the 28th May 1945 cover of ‘Victory’ The Weekly for India Command. The name ‘Chindit’ was suggested by Captain Aung Thin, DSO of the Burma Rifles. Chindit being a corrupted form of the Burmese mythical lion-like creature, Chinthé or Chinthay, which traditionally guarded Buddhist temples.

The Chindits, officially known as the ‘Long Range Penetration Groups’, were special operations units of the British and Indian armies which saw action in 1943–1944, during the Burma Campaign. The creation of British Army Brigadier Orde Wingate, the Chindits were formed for raiding operations against the Imperial Japanese Army, especially long range penetration: attacking troops, facilities and lines of communication, deep behind Japanese lines.

Wingate was an eccentric and a maverick who was admired and loved by his men. His unorthodox methods made him enemies in the Military hierarchy but had one very important supporter and ally - Winston Churchill. 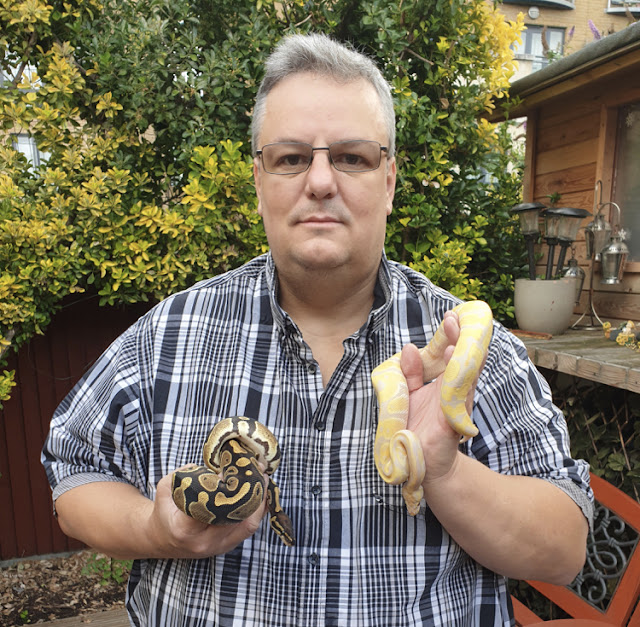 Always fascinated by animals Bradley’s love of reptiles and amphibians started at the age of 16 when he was given a Royal Python - much to his parent’s horror. Although they weren’t initially too keen, he did manage to turn them around.

By the age of 18 Bradley owned many lizards and snakes, keeping one snake at home and the rest of his collection in the premises of his Direct Mail business.

Bradley Winfield, Cabbie and Volunteer for London Taxi Drivers Charity for Children, said, “ Aged 18, living at home and with lots of disposable income,  I did lots of  buying and selling and decided that I would l wind up the Direct Mail business I owned and use the money to buy the shop where I bought most of my reptiles from. Then later I bought a warehouse and turned my hobby in to a successful business which I ran for fifteen years.”

Back then Bradley had a very keen interest in venomous reptiles and his collection included Rattlesnakes, Vipers, Cobras and Mambas. His business called The Vivarium, in Walthamstow, sold snakes lizards and frogs and he especially liked Poison Arrow Frogs.

Bradley continued, “I have been a cabbie for fifteen years and although I no longer have my Herpetology business, my love of reptiles and amphibians is still as strong. Currently I have a collection of Kingsnakes, including, Mountain Kings, California Kings and Pythons as well as much larger snakes including a 5ft long Short Tailed Python from Malaysia.”

A volunteer for the London Taxi Drivers’ Charity for Children (LTCFC), Bradley and the committee and volunteers were very disappointed that their annual summer outing to Southend had to be cancelled this year– the first time in over 90 years. The LTCFC team are looking forward to pandemic restrictions being lifted so that they can once again put smiles on the faces of hundreds of special needs and disadvantaged children and their families and carers at their events.