BREAKING NEWS : Uber and Lyft lose their bid to delay a court order in California that says their drivers must be classified as employees. 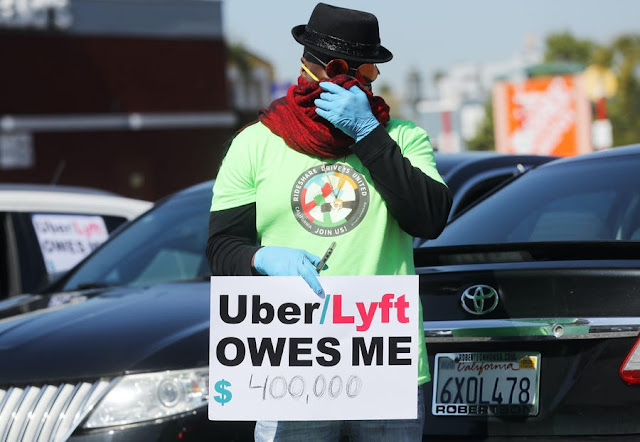 A California judge on Thursday refused to grant Uber Technologies Inc and Lyft Inc more time to appeal his decision requiring the ride-hailing companies to classify drivers in that state as employees.

At a hearing in San Francisco Superior Court, Judge Ethan Schulman said he found no reason to push back his Aug. 20 deadline for the companies to appeal the preliminary injunction he issued on Monday before it could take effect.

"I am unconvinced that any extension of the 10-day stay is required," Schulman said. "Both applications are denied."
Uber and Lyft have said they will appeal.

Uber shares were down 0.9 percent in afternoon trading, while Lyft shares lost 4.8 percent. Lyft had reported results late on Wednesday.

The injunction came in a lawsuit where California and the cities of Los Angeles, San Diego and San Francisco accused Uber and Lyft of violating Assembly Bill 5, a new state law making it harder to treat "gig" workers as independent contractors.

Uber and Lyft prefer using that classification for drivers, because treating them as employees would require benefits such as minimum wage, paid sick and family leave, unemployment insurance and workers' compensation insurance.

"Lyft cannot comply with the injunction at the flip of a switch," Lyft President John Zimmer said on a conference call Thursday.

"Reclassifying tens of thousands of self-employed drivers would be a significant challenge in normal times. And in the current pandemic environment, that would be nearly impossible."

The hearing came one day after the companies threatened to temporarily stop serving California, arguing that treating drivers as employees would require overhauling their business models.

Neither company is profitable, and both have suffered steep ridership declines during the coronavirus pandemic. They have also said drivers prefer remaining independent.

Uber, Lyft, DoorDash, Instacart and Postmates are spending more than $110 million to support Proposition 22, a November ballot measure in California to keep drivers as contractors, but with some benefits.

In ordering an injunction, Schulman had assailed what he called Uber's and Lyft's "prolonged and brazen refusal" to comply with state law.

Axel Springer, Insider Inc.'s parent company, is an investor in Uber.
Posted by Editorial at 10:03 PM