And Now For The Good News... Taxis Have Been Included In The New LBHF Imperial Road Traffic Scheme 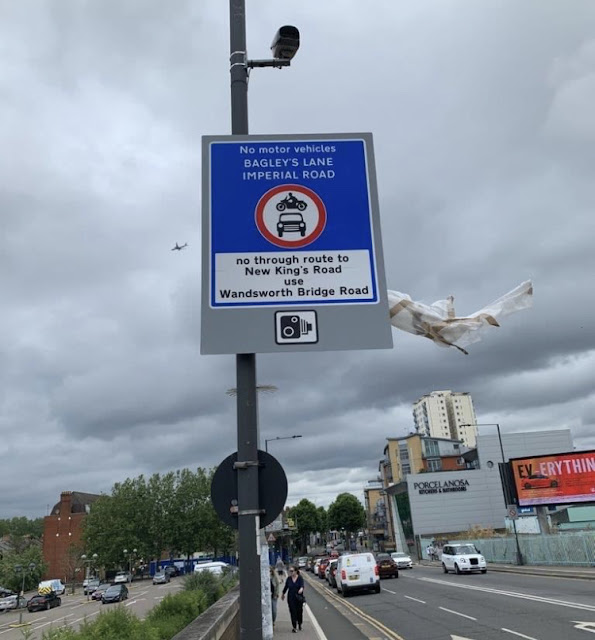 Working with residents, we have developed a pioneering traffic reduction scheme which uses the latest smart camera technology to halt rat-running by out-of-borough drivers.

The scheme is planned to go live in mid July and will significantly reduce traffic across the whole SW6 area. Signage is going up now and cameras will be installed shortly.

The implementation comes after detailed work by residents on the SW6 Traffic Working Party addressing the issues raised by the experimental closure of Harwood Terrace as well as long-standing traffic issues in the wider area.

We are sympathetic to the traffic problems faced by Harwood Terrace residents over the years.

That's why we agreed to a time-limited experiment. It was always clear that it was an experiment, not a permanent closure.
The experiment was meant to run from November 2019 to April 2020. It was extended because of the COVID-19 pandemic, which meant we couldn't work at pace to introduce the new scheme based on the findings of the experiment.

We are now acting on the experiment's findings. The key ones are that, while it ended rat running in the terrace, it displaced large amounts of traffic to surrounding streets and caused long traffic delays, including to buses.

We also learnt that 90% of the traffic was being caused by non-H&F residents.

As a result we have developed a new scheme which uses new technology to read and recognise licence plates and stop non-residents rat running through SW6 streets including Harwood Terrace, which will re-open. This will reduce traffic throughout the area to significantly below what it was before the closure.

We will implement further traffic calming measures in Harwood Terrace, which will no longer be able to be used as a rat-run by out-of-borough drivers.

We have consulted extensively with residents on this scheme through a series of public meetings including a special scrutiny meeting, Cabinet meetings, an online presentation and Q&A attended by almost 400 residents during lockdown, and the ongoing work of the SW6 Traffic Working Party.  We would like to thank all the residents involved for their time and commitment.

As a result of listening to and working with residents, we have developed and refined the scheme considerably. Once it is implemented, we will measure its impact closely and will share the data with residents and make any amendments needed.

The scheme will introduce traffic restrictions for non-residents, using “no access” points. This will be enforced using smart camera technology that reads and recognises vehicle number plates.

We have worked with residents to confirm the permitted vehicles, to include buses, taxis, visitors, emergency services, refuse trucks and council service vehicles.

Our aim here is to reduce significantly the through traffic east of Wandsworth Bridge Road, including through Harwood Terrace, and improve bus journey times at the Bagleys Lane junction. The expectation is that traffic previously able to cut through to New Kings Road will be eliminated.

Numerous warning signs will be installed across the area to signal the changes.
Traffic flows will be measured during the experiment and the findings and possible adjustments discussed with residents.

Harwood Terrace – additional traffic calming
In addition to reducing traffic through the reopened Harwood Terrace significantly by stopping non-residents using it as a cut through, we will introduce full width speed humps and planters at the width restriction to reinforce traffic calming and improve the visual feel of the road.

We will also work with residents of Harwood Terrace to define a new concept for the road that will seek further to enhance traffic calming and greening.

Imperial Road southbound
The scheme includes a southbound restriction on Imperial Road. This is felt necessary to address the problems of evening traffic travelling southbound and queuing at the Townmead Road and Wandsworth Bridge Road junction, and of traffic trying to get around queuing vehicles on Townmead Road by diverting through Stephendale Road in order to join Wandsworth Bridge Road. The southbound restriction will also support the aim of reducing total traffic volumes in the area.

Residents will be unaffected by the access restriction and can drive through all control points. All areas such as the Sainsbury’s supermarket and Harbour Club will remain accessible for non-residents by using Townmead Road.

Stephendale Road, Hazlebury Road and Broughton Road
The problem of rat running through Stephendale Road, Broughton Road and Hazlebury Road existed before the experimental scheme on Harwood Terrace. Although the Harwood Terrace experiment did not increase total traffic across the SW6 area, 25% of traffic that had previously used the terrace instead used the Bagleys Lane junction, which then had an impact on these residential streets.

The access restrictions at Bagleys Lane will mean that out-of-borough traffic will no longer be able to drive through Stephendale Road or any side roads to exit via the Bagleys Lane junction. As a result, total traffic through Stephendale Road, Hazlebury Road and Broughton Road is expected to reduce to levels lower than before the experimental closure of Harwood Terrace.

We do not expect traffic to be more likely to drive into these roads just to rejoin queueing traffic on Wandsworth Bridge Road at busy times as this would hardly improve journey times.

However, we will tackle the possibility of this happening by introducing additional control points on Hazlebury Road and Broughton Road, enforced by smart camera technology.

Area west of Wandsworth Bridge Road, including Perrymead Street and Studdridge Street
Our aim here is to reduce the rat running and through traffic from which this area has suffered for many years. We do not expect the above measures to push traffic to the western side of Wandsworth Bridge Road, which saw a net reduction in traffic after the Harwood Terrace experimental closure. 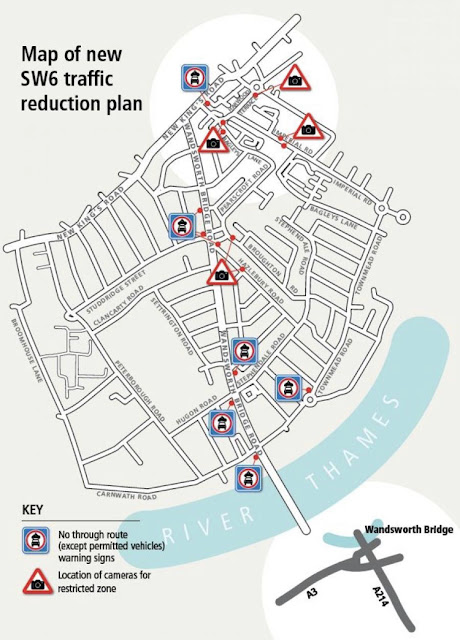 TAXI KEAKS EXTRA BIT:
Although we are definitely included in this traffic calming scheme, the signs have already gone up and there’s no mention of our inclusion.

LBHF have a history of producing misleading schemes which tend to trap unsuspecting motorists. Are they expecting some vehicles to follow Taxis as they take a right off Wandsworth Bridge Road into the side streets travelling east toward Sands End . It will also be interesting what the Double Tree Hilton has to say about this, or can their residents be entered by the hotel on to the local residents data base for the duration of their stay???

Personally, I don’t trust LBHF one bit. Who can forget the massive cash cow of the yellow box Junction at Bagleys Lane and New Kings Road -at one point, the highest earning Junction in the UK.
Posted by Editorial at 8:47 PM