Westminster Council In Danger Of Repeating Past Mistake With Soho Pedestrianisation. 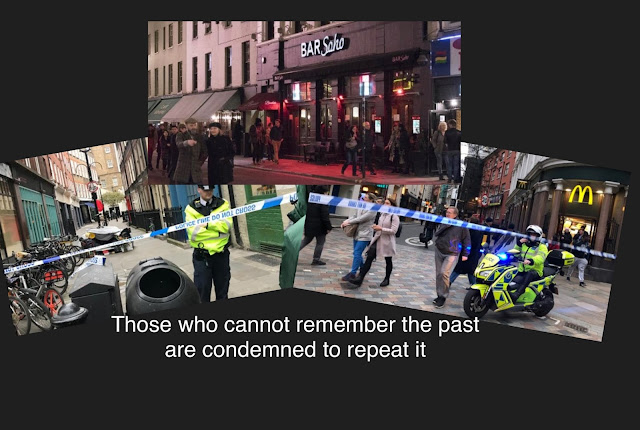 In Madrid 1863, philosopher George Santayana said "Those who cannot remember the past are condemned to repeat it".

About 10 years ago Westminster Council decided they would pedestrianise the Soho area to encourage people into the area after the migration to Shoreditch had left many local businesses on the brink of having to close.

Continental alfresco dining, rest benches, planters with trees and floral displays were place around the streets that had been emptied of all vehicles.

It became clear that within a few months, Soho had become a den of drug dealing, mugging and sex crimes. Local police could see what was going on, with the help of a newly installed network of CCTV cameras, but couldn’t respond in reasonable time because of the obstructions and surrounding increase in heavy traffic.

Police budgets (that old chestnut) had been cut and there was a serious shortage of police manpower on the street, all over the West End.

After a few months, it was decided that enough was enough, and the area was returned accessible to through traffic.

However the problem of high incidents of drug dealing, street robbery and sexual assaults remained. The police were force to put forward an operation using extra officers deployed throughout Soho to reduce robberies, violence, sex crime. But all this did was move the problem to another area (Covent Garden)

At that time, a Westminster police spokesman at Scotland Yard said: "Operation Trafalgar will be a long-term approach to make the West End a safer, more secure and enjoyable place.

Obviously with Sadiq Khan’s new police cut backs announced this week.... that approach to make this area more safe, has gone out of the window, as we are told, they are about to replicate the same measures.

Obviously Westminster Council and the Met Police, haven’t learnt from their past mistakes.
Posted by Editorial at 8:01 PM