Another Blast From The Past: The Golden Days Of The W9 Night Taxi Shelters... by Jim Thomas 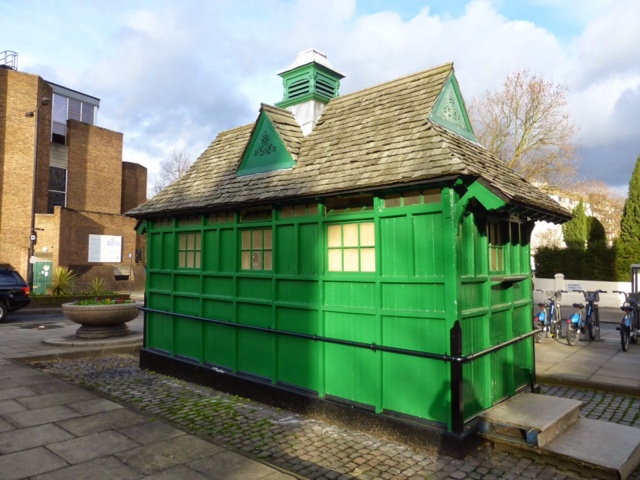 Back in the early 80's, the best part of my night shift, was the 2 hours (1till 3 am) spent in the Warwick Avenue Taxi Shelter, It was pure magic. The place was alive and always full of wonderful characters.

Doing the knowledge was just the beginning, you learned more about the job from your colleagues in these little green huts than any blue book. It was also where you learned about 'Cabby Etiquette'.


London Taxi drivers, icons, respected by the public, anything and everything was possible.

It was the best of times, it was the worst of times:
For the late night drivers in the Warwick Avenue shelter, night after night, it was always the greatest of times. Probably down to the respect felt between the drivers and staff members.

There was never a clique, everyone was welcome. 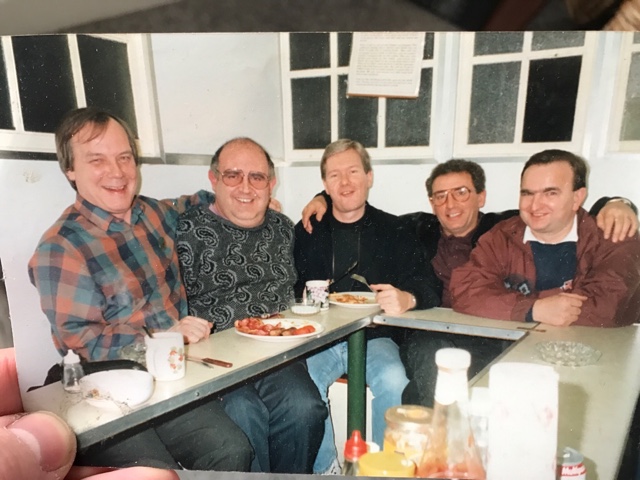 Many of the long standing friendships I've enjoyed over the last 46 years driving a London Taxi working mainly night shifts, stem from the many hours spent in fantastic company in W9.

We had amazing party nights (alcahole free of course), karaoke nights, heated debates mixed with the occasional visit from local celebrities such as Pat "Bomber" Roach, Paul McGann (before he became the doctor), Dennis "Minder" Waterman, Kenny 'Faces' Jones, Boy George's drummer John Moss, Kiki Dee and even One time hard man, Frankie Fraser... all regulars at the window and on rare occasions allowed to sit with the drivers inside. 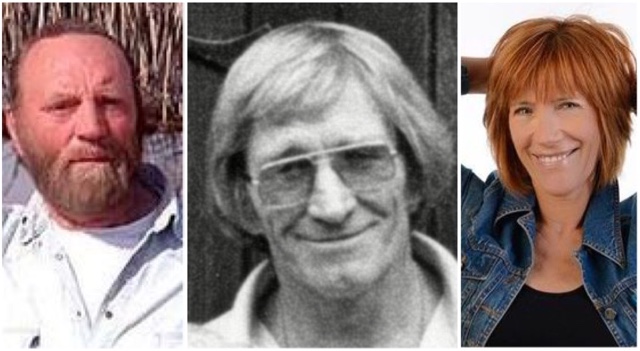 Many minor celebrities living in Maida Vale would stop at the window and get a sandwich on their way home from work or a night out on the town.

We'd leave there just before 3am and then file over to the Victoria Casino which used to burst around 3.

Regular Riders:
A maths teacher nicknamed Clive Sinclaire because of his resemblance to the entrepreneur, a regular rider to Richmond, swore he had an unbeatable system, they all thought they had a system, but they all came back most nights.

Some nights you'd see a saddened familiar face and hear, "done all my dough tonight mate, will you take me home and I'll pay you tomorrow"....and we did, brownie points all round.

Regular rider was ‘Great Train Robber‘ Gordon Goody, home to East Dulwich.
I remember saying to him one night, "which way you prefer to go Mr Goody?"
He came back menacingly with "You can go whatever way you like son, but you're only getting 11 quid end of".
He then sat back and read his paper. 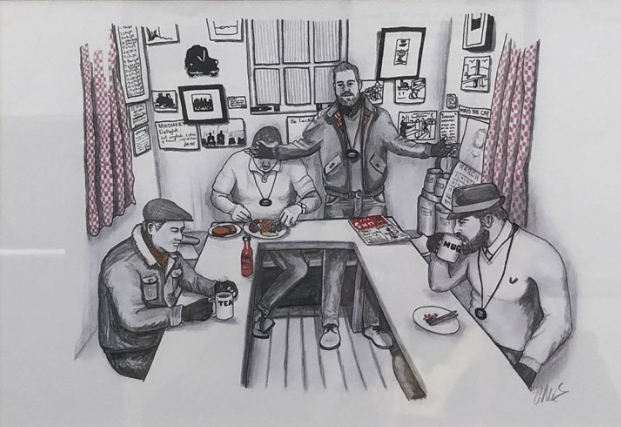 The original Taxi Action Group (TAG) hit squad was born in and ran from Warwick Ave shelter. We arranged regular hits on Hombres, Cranbourn Street and the Sports Cafe. Much harder back then without social media, it was mainly word of mouth around the ranks.

We even had a night mechanic (Norman) who used to do running repairs in the middle of the road outside. There were a few complaints from local residents (mainly from the vicarage on the corner) but most were happy to have us there, as burglaries in the area were rare.

Kenny Jones, who owned a large house just south of the shelter, used to get one driver (fireman Ron who, After his divorce, lived in an old caravan parked up on Fermoy Road) to house sit for him while he was away on tour with his bands.

Ron knew Kenny from his school days and through their friendship became a regular chauffeur to Kiki Dee. In turn, Ron would bring Kiki to the Shelter for a quick cuppa before dropping her home to Warrington Crescent

It was a sad day when we got the news that the shelter had to close at night, but to our surprise, along came the original Royal Oak Cafe', waitress service, pool tables, a 24 hour shop, fuel pumps and a hand cab wash... the fun was to continue. 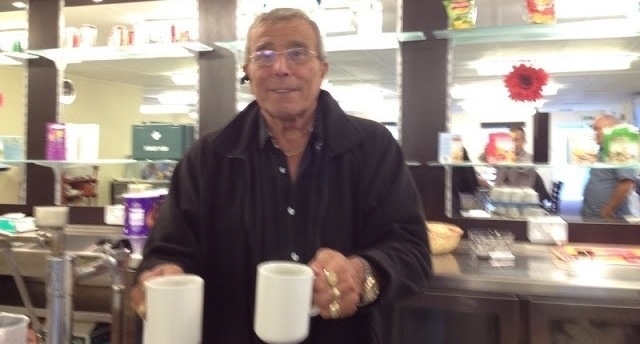 Johnny Anderson, Mr Royal Oak.
We nicknamed the original Royal Oak "The Anderson Shelter" after Johnny and I got the idea for my first ever blog after talking to John about promoting the trade on the new medium of Twitter which was becoming very popular.

Unfortunately, both the Old Royal Oak and the new Royal Oak are now sadly gone and the only 24 hour dedicated Cabbie eateries and rest stops are the Kings Cross Taxi Centre -in Bookers car park, Camley Street- and Great Southwark Street.

It will be a great shame If we were to see any of our historical cab shelters disappear, but many drivers these days seem to prefer the chains of coffee shops and fast food restaurants, so it's possible, some will eventually go.


Remember, when the go, they go for good!

Good news though, over the last few years since this BBC news item went out, Two of our historic test stops have had amazing make overs and are now run by wonderful staff. 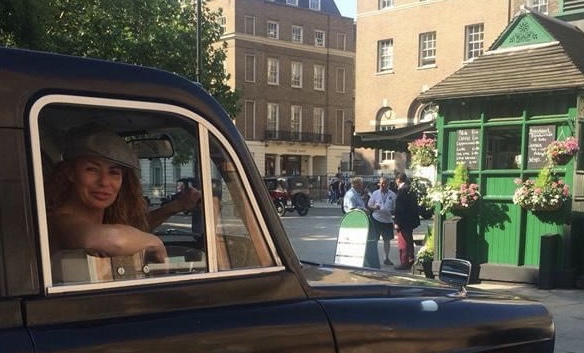 Russell Square and Kensington Park Road have been completely retired back to their former glory. 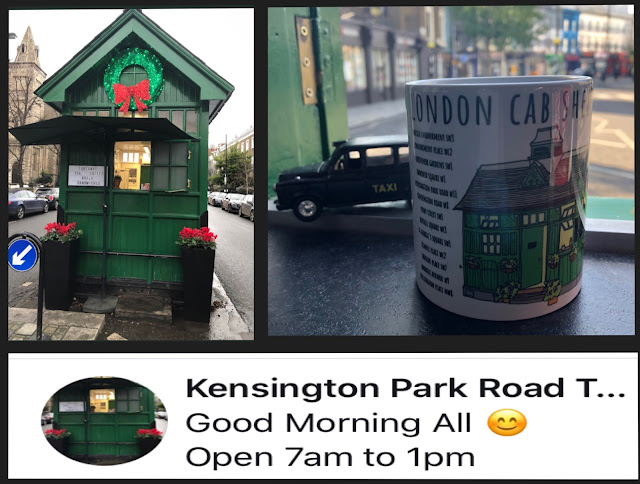