Don’t Decommission Your Old TX4, Convert It To Fully Electric For £12k 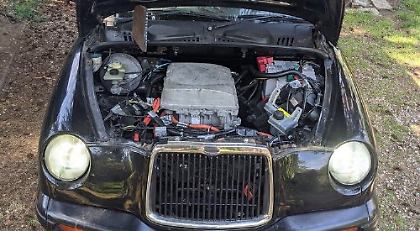 AN engineer from Henley hopes to help tackle air pollution by building and selling electric taxis.

Alex Howard is about to produce his first prototype and hopes to test it on the road later this year.
Dr Howard, who works for an audio-visual installation firm, and his business partner Janosch Oppermann, a freelance software engineer, converted an old black cab in the garage at Dr Howard’s childhood home in Rotherfield Road, where his parents Alan and Irene still live.

The pair had been introduced at a party by the Howards’ neighbour Chris Meachin, a mutual friend who was aware of their shared passion for electric transport.

They came up with their idea about 18 months ago and began converting the 17-year-old taxi, which they bought in London for £1,000.

They ripped out the diesel engine and installed an electric equivalent from a Nissan LEAF van. They also installed 48 battery cells, which together can power the vehicle for a journey of about 90 miles. 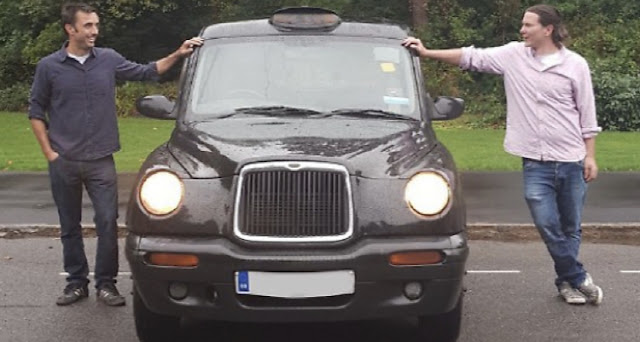 Dr Howard and Mr Oppermann, who will trade as Clipper Automotive, worked on the project one day a week, using tools belonging to Dr Howard’s father, a retired electronics engineer.

During the lockdown they were able to get more work done as Dr Howard was furloughed from his day job.

They have approached several taxi licensing authorities, including Reading Borough Council, offering free use of the vehicle so that they can assess its performance.

If it proves viable they may try to get it approved for use in London and seek investment to produce more vehicles with a better range. Eventually they want to build their own cabs from scratch as converted vehicles have a limited shelf life.

Although “hybrid” taxis already exist, with diesel and electric engines, the men say drivers often rely on the former so their potential benefit goes unrealised.

Their prototype cost £12,000 compared with the £70,000 cost of a hybrid and they believe they could make a new-build electric for less.

Dr Howard, who attended Trinity Primary School then Gillotts School in Henley, sat a degree in mechanical engineering at Durham University then a doctorate at the University of Manchester Institute of Science and Technology.
He now lives in London with his wife and two children but regularly returns to Henley.

He said: “I’d been thinking about converting vehicles to electric for a while and so had Janosch, so it was just great to meet him and finally get it off the ground. It’s not the sort of thing you can easily do on your own.

“It has been frustrating only having one day a week to fit this around our lives and we really want to accelerate everything and get funds together to launch as a proper business. In that sense, the lockdown has been helpful as before we’d meet up and work until we were too tired to keep going.

“We’re now well on the way to proving our concept and that’s an important first step, although we’re still only on the ‘lower slopes’ overall.”
The pair learned how to build an electric car using online tutorials and YouTube videos.

Dr Howard said: “I’d done a bit of research and, as an engineer, the concepts aren’t totally foreign but we didn’t know anything about the automotive side of things.

“We basically had to school ourselves and the internet is a wonderful thing for that. You can dig up technical manuals and there’s a huge community of hobbyists who’ve done all sorts of projects and posted videos of the results.

“We had to strip everything out — the engine, exhaust system, diesel tank and so on, which we sold as scrap. Then we could put the new engine in and there are a lot of complexities like integrating it with the brakes and steering or installing air conditioning. It has been good fun but it’s hard work. There’s a lot left to do but we’re really passionate about making things happen and turning this into a viable product.

“When we see our taxis rolling around the streets, we’ll feel a real sense of achievement.”
He said his vehicle could reduce air pollution in towns like Henley, where levels of harmful nitrogen dioxide and fuel particulates have been well above the recommended safe limit for many years.

Dr Howard added: “I’m bringing up children in a city and I’ve been horrified by the science that’s been increasingly coming out around air pollution and the damage it causes.
“I really want to do something about it and wish I’d been at this point some years earlier.

“I’m very thankful to my parents for the use of their garage. It hadn’t been in use for a while so it was an excuse to do more with it, though we did break several of my dad’s tools in the process.

“They’ve been incredibly supportive and we couldn’t have got this far without them. We’re going to need a bit of investment to keep pushing it forward but there is definitely a need for something like this.”

Mr Oppermann said: “When we were first introduced, Mr Meachin told us to go for a pint together because we were talking about electric cars so much that he didn’t want to hear any more.

“It all went from there and it has huge promise because if you look at high-speed tests they’re doing in America, electric cars are starting to outperform conventional ones so they will be phased out eventually.

“We’re very driven by a need to improve the environment as we’ve got some of the worst air quality levels in Europe and taxis are one of the biggest polluters.”

The first fully electric taxis in London’s history, made by a firm based in Coventry, were approved for use by Transport for London in November.

Source: Henry Standard
Posted by Editorial at 10:23 AM