Outside Grodzinski in Edgware Friday 27th March. "If That’s The Law Sir, Then The Law Is An Ass". 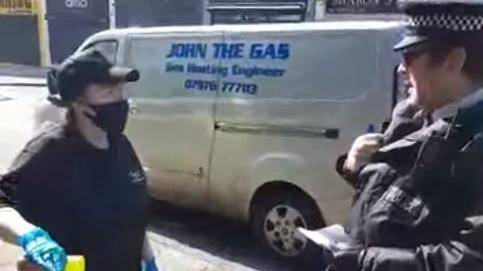 A Metropolitan Police officer has been filmed threatening to fine a Grodzinski bakery employee for drawing temporary lines on the pavement to help customers queue at a safe distance from each other.
The officer can be heard outside the Edgware bakery telling the employee that marking “council property” is a criminal offence and that “the law still applies, coronavirus or not” while she insists the spray chalk paint can just be washed off.
The woman says: “It’s to keep my customers safe”.

A passer-by, who filmed the scene on his phone, tells the officer: “This is horrendous. This is ridiculous. He’s giving her a ticket. I guess the police want people to die”.

Referring to the chalk markings on the pavement, the officer says: “Ideally this needs to be taken off”, adding, “The law is the law and that doesn’t change because of what is happening”.
At one point the officer appears to indicate that if the markings had been placed on the window of the shop instead of on the pavement he would not be recording the act as an offence.
“Unbelieveable”, the woman replies.

The man filming says: “He’s giving her a ticket when this is removable,” before addressing the officer and saying: “You want to call anyone above you before you do that?”
“I don’t need to,” the officer replies.
The man behind the camera tells him: “This is the opposite of taking care of the public”.


When the female employee says that she has an outdoor trading licence, which made the marked pavement area her property, the officer replies, “that’s something for Barnet trading standards to look into”.
The Met told the JC the officer ultimately did not proceed with issuing a fine but added: "The actions shown in this video do not reflect the current policing style that the MPS seeks to adopt."

"The officer advised the woman that he was planning to issue a ticket for criminal damage. However, following a further conversation, no ticket was issued," a force spokesperson said.
"The officer has been spoken to and all staff on the borough will be reminded about using discretion where appropriate in these exceptional times."

TAXI LEAKS EXTRA BIT :
This article is obviously not Taxi related, but it shows the attitude of a police sergeant towards a member of the public, acting on behalf of her customer's safety.

This is the same attitude that Taxi drivers often are faced with by undercover police officers at mainline Taxi ranks.


Recently reported in Taxi Leaks, we saw an undercover police women harassing a driver at Kings Cross rank, then actually tried to submit a false video as evidence in court....when the driver's barrister pointed out that the video was not of the driver in question, the case was immediately dropped by the prosecution.