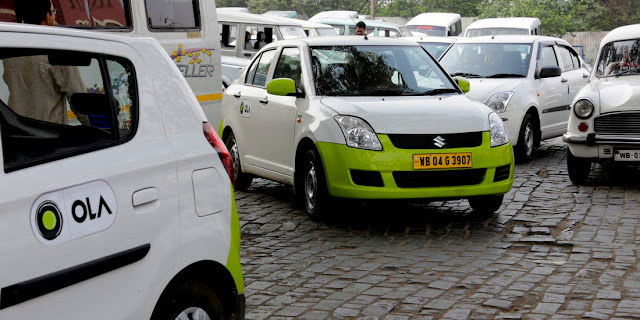 India-based minicab firm Ola claims it will “focus on drivers, safety and a collaborative approach”. Something we’ve already heard from Uber but who are currently fighting an appeal after being refused a licence for failing to focus on customer safety and being unfit to hold a PH licence.

Along with Ola, the London Taxi trade faces stiff competition in from other mini cab apps such as Bolt, Kapten and Kabbee.

Ola was founded in 2011 and began operating as a trial in the UK in South Wales in August 2018.

20,000 drivers have already signed up to Ola's platform in London, but unfortunately for the public, most will be Uber drivers working on a second or third app.

The minicab firm said it has 20,000 drivers signed up to its platform in the capital and will be “fully operational from day one”(Today).

Something you won’t read about in the story out out in the media from Ola.
We mustn’t forget that these drivers signing up for Ola are recycled from Uber, where 13,000 have been shown to have fake criminal record checks and unbelievably 600,000 complaints in just the first 6 months of last year. These are the same drivers who have recorded 100’s violent rapes 1,000’s of sexual assaults, large amounts of hacking and customer fraud, on a scale never before seen in the private hire market.

In articles in today’s media Ola state: To make the app appealing, drivers will retain all of their earnings for the first six weeks and will then benefit from “market-leading commission rates”.

The company described its approach to passenger safety as “industry-leading”, through measures such as 24/7 voice support, an option to share journey details with friends and family, and in-app emergency features.... something they Uber always boasted about which didn’t stop the 600,000 complaints from passengers  rolling in, while they were on probation over the first 6 months of last year.

It also pledged to maintain its “collaborative approach” with regulators and local authorities.

Simon Smith, head of Ola International, said: “The overwhelmingly positive reception to Ola since launching in the UK in 2018 illustrates the significant demand from drivers, riders and communities.

“We are working closely with drivers to build a high-quality and reliable service for Londoners.

“Launching in London is a major milestone for us and we are keen to offer a first-class experience for all our customers.”

Ola say they will be offering passengers the choice of using a private hire vehicle or a taxi. While this may be the case in the provinces, it certainly isn’t the case in the Capital, where no Taxis will be signing up to a minicab app.

Uber who made the same promises on multiple occasions says its London operation has 45,000 licensed drivers and 3.5 million customers.

Transport for London rejected Uber’s application for a new licence in November 2019 due to “several breaches that placed passengers and their safety at risk”.

In spite of the multiple rapes, sexual assaults and fraudulent actions, Uber has been allowed to continue operating while it appeals against the decision... simply because TfL just let their licence probation expire, instead of revoking their licence as they would with any other minicab or Taxi operator.

In an already over saturated market, which is currently seeing London streets gridlocked (so much for cleaner air quality)...why have TfL licensed so many minicab operator licenses?

Many of these companies are registered abroad and don’t contribute to the exchequer by paying their fare whack of Tax!!!
We ask, are TfL putting their own interest above that of the tax paying public, and just scooping up the licence fees... having no regard for these companies tax contributions?

Another question that needs answering:
Uber have records of all the journeys (14,000) completed, which were illegal because drivers who were uninsured, had fake documents, accepted the bookings.


Why haven’t TfL or the CPS prosecuted Uber or the drivers themselves ???

Perhaps Andrew Boff, Shaun Bailey or Greg Hands, would like to answer these questions ???
Posted by Editorial at 1:54 PM