The driver led Independent Taxi Alliance would like to thank ITA protestors for their undying support.
It is you proactive drivers, who refused to lie down, who kept us going.
Quite rightly you should be proud of what each and every one of you has achieved.

A special thank you must go to Trevor Merrills and Angela Clarkson, of the United Cabbies Group, who took us to the top table and introduced us to their barrister.

Trevor and Angie took Danny Hussey, Sean Paul Day and me to meet with their QC, even though we were not UCG members, because they understood the importance of the #WhereBusesGoTaxisGo protests and how losing our roads, our workplace, affects the entire trade.
Not only that, but they paid for it too.
These are genuine people.

Since our protest last year Danny Hussey (the brains of the outfit) and I have been working on a legal challenge to these anti-Taxi Labour Councils.
But without Angie and Trevor, who wanted nothing in return, not even recognition, our legal fight would never have got off the ground.
Danny and I wholeheartedly thank you both. 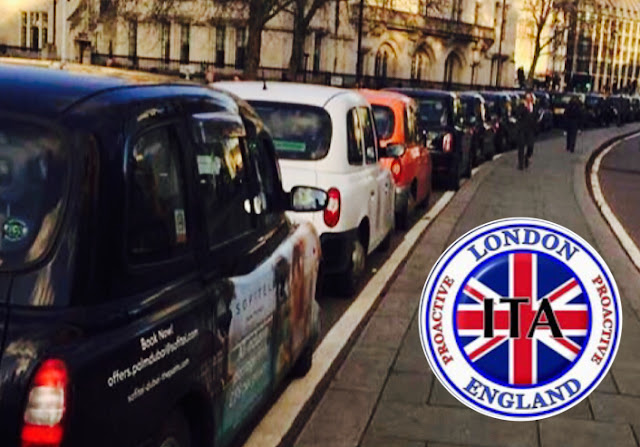 Our latest protest showed authorities the grit and determination which our 500 strong group of ITA protestors possess.
Without question they are the strong arm of this otherwise weak trade.

So why always the Square?
Protests aren't aimed at bullying tyrants into conceding to our will - that cannot work with such small numbers.

ITA protests are aimed at forcing tyrants into sitting down and listening to our grievances and demands at the negociating table.

Like their idol Stalin, the anti-Taxi councillors would have taken no notice of some baying crowd of proles which were causing no individual inconvenience to them whatsoever.

When tyrants refuse to listen and choose to ignore peers of the realm and members of parliament who speak on behalf of the oppressed, the oppressed must turn to the judiciary for justice.

With the help of UCG leaders, we have drafted an excellent case.
None of which would've happened, had we not persevered in the Square under the noses of those who matter, and those who care.

Had Angela Clarkson of the UCG, who attended every protest, not approached us to support our legal lifeline, with the full knowledge of Trevor Merrills, we would have had to up the ante and our protests to flash ones with a roaming impact until we were either met by the authorities at the negociating table or were met with an immovable police force instructed to "get heavy".

The ITA protests averaged 500 drivers. This is the reason they have taken so long - with Mayor Khan, Mike Brown and anti-Taxi Labour Councillors  emboldened by apathetic drivers who would rather work on or stay at home watching Cash In The Attic than stand shoulder to shoulder with their colleagues.

Encouraged by the Can't Demo, Won't Demo majority, you can see why the authorities believed that, what started as 4,000 and ended up as 500, the protests would finally fade away.
I personally would carry on if there were only five of us left.

Just think if we had half of our trade turn up, it would have been over after only two or maybe three protests - with the authorities bending over backwards to accommodate us.

The authorities know this trade is mostly made up of cap in hand feeble mushrooms and plastic gangsters full of piss and wind too frightened to have their friend's back.

In spite of the absentees we will definitely win this #WhereBusesGoTaxisGo fight.
My only regret is that the stay-away cowards will also reap the benefits we fought so hard to win.

I am proud to have stood with you all.

We would also like to take this opportunity to thank every proactive driver who turn up every time the call goes out.

Plus a special thank you to Sean Paul Day for the enormous amount of time and effort he puts in to helping the ITA. 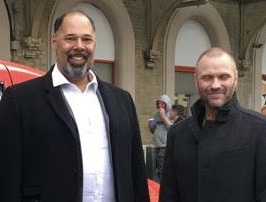 Posted by Editorial at 2:08 PM