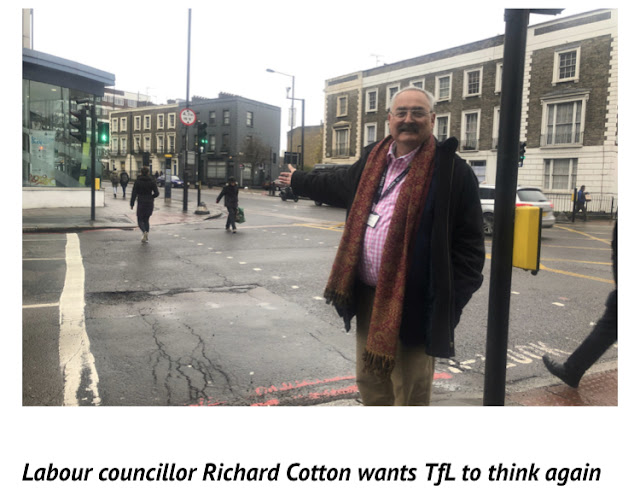 Tottenham Court Road goes Buses and cycles only in just over a months time.... but if you think that’s the end of TfL meddling in the transport structure of the borough run by Lycra clad loonies... thing again!!!

Resident campaigners  are re-bolstering their efforts to halt plans by Transport for London’, to introduce a block on the current left turn from Camden Street to Camden Road.

The transport authority are to introduce a pedestrian crossing across Camden Road by the British Transport Police headquarters, which will be facilitated by the new no left turn.

Local residents say they support the crossing, idea but urge TfL to consider other options on the proposed ban, including add­ing a traffic filter light onto the traffic signals.

Phil Kemp, who lives in Jeffreys Street, said it will push traffic trying to get to Holloway across the junction, then using residential streets as rat runs to get back onto Camden Road. It would then only be a matter of time before the Council blocked entry to the local streets, causing another no go area similar to Fitzrovia.

Even the Camden Cycling Campaign are against the ban! They said many on two wheels were concerned that banning the turn will put more traffic on the side streets. Funny though they’ve never come out about other Camden schemes that have done just this.

Writing in the Local paper this week, Kate Gemmell from Tenants Residents Associations Camden Town (TRACT), said: “The issues with the junction could be addressed with a bit more Intelligent planning, common sense and adjustment to the traffic light sequence and an introduction of the 20mph speed limit to both Camden Street and Camden Road through this busy section of town.”

“The traffic is like water, it has to escape somewhere,” he said. “I did write back to them and said it seems to me that almost everybody has been ignored.”

In a letter to Andrew Dismore, London Assembly member for Camden and Barnet, Heidi Alexander, the deputy Mayor for Transport said the junction was “one of the most dangerous junctions in London”.

The response to Cllr Cottons request by Heidi Alexander is more like a script for stand up night at the Apollo.

Responding to concerns about traffic on residential streets, she said:
“As with all TfL schemes, this change has been modelled and TfL is confident that traffic is expected to disperse over a wider area.

When alternative options were considered, which did not include the banned left turn, traffic impacts on Camden Street would likely result in vehicles seeking to ‘rat run’ to avoid the traffic queue leading up to Camden Road.

This traffic queue would also have resulted to delays for the 10,000 bus passengers that travel through the junction in the morning peak.”

Proving that Heidi is definitely not the right person for the Mayors deputy on Transport matters... but then, we already knew that (roll on the Mayoral elections)

TAXI LEAKS EXTRA BIT :
Let’s hope all the residents of Camden  remember Heidi’s reply at the up-coming elections and they vote accordingly.

Objections and representations on TfL’s plans can be made until February 6. Mr Dismore said it was a “pity” that TfL had not listened to residents’ feedback. 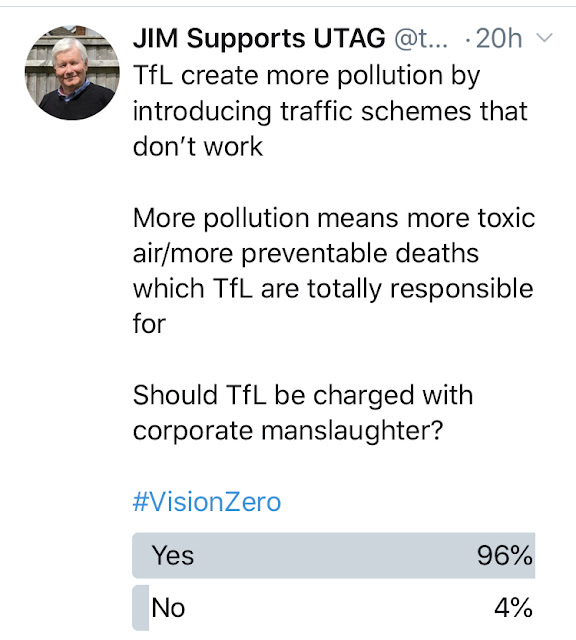 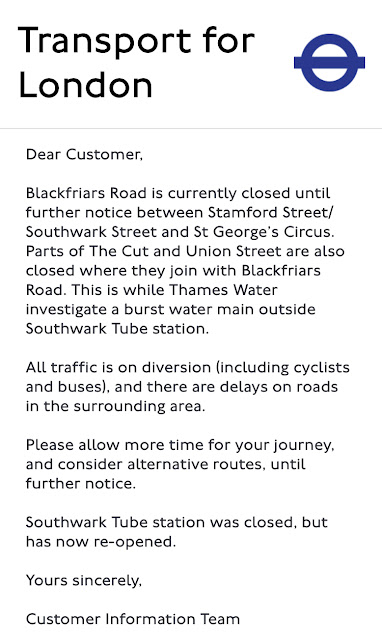 On reflection:
This again is more proof, if any were needed, that cab drivers are their own worst enemy.

This proposal got through on just 300 votes on the consultation.
Cab drivers didn’t bother to vote, just like they (95%) don’t bother to protest or demonstrate.... they expect others to fight the fight for them while they just continue to work on.

They don’t do consultations and they don’t do on-line petitions.
Funny enough, half the trade believe that they pay associations and unions to fight for them on their behalf.... wonder how many of these drivers still believe in Santa Claus and the tooth fairy ???
Posted by Editorial at 3:14 PM