If Carlsberg Did Demos... They’d Call In The Proactive ITA. 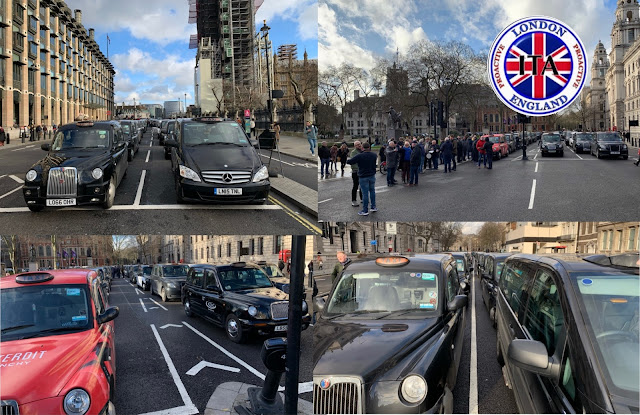 Again The main body of London’s Taxi drivers failed to support their own trade, their own colleagues and the continued future of guaranteed street access, staying away en masse to their own disgrace.

But on the upside, 400 of London’s finest proactive drivers, you know the ones, the same ones who turn up when asked, time and time again. The ones who care about the future of the trade and are prepared to fight shoulder to shoulder with other proactive drivers.

Very shortly Tottenham Court Road will become Buses and Cycles only....this will herald a move towards the loss of access to more major roads, making our job extremely difficult. It will make journeys longer and more expensive, pushing passengers toward cheaper alternatives.

There are plans for many more no entries, no right turns, no left turns, traffic free streets and a massive roll out of bus gates which will spread across the capital from the east.

Those of you who stayed away or carried on working, should hold your heads down in shame. You will be the first to scream and shout when you can’t get around, can’t pay the repayments on your new cab, can’t make the rental on time...

We know we are few, but we are the only ones it seems, who care about the future of the trade, care about their proactive brothers and sister...the same ones who always turn up.

And today, you made me feel extremely proud.

Cabbies on tour:
We had advanced information that the protest wasn’t going to go as well as in the pass and that the police were going to make it difficult.... but their arrogant attitude backfired which made our job easier.

The police lifted the exclusion of the area too early and so we had no choice but to "go on tour".
Something we had planned in advance.

First we hit Hyde Park Corner which shuddered to a halt pretty fast. Police on bikes rushed to the scene and diverted cabs away down Park Lane and Piccadilly (we couldn’t believe our luck as the second target was Piccadilly Circus).

As soon as Piccadilly became gridlocked, our route changed again, with a new destination of King Charles 1 roundabout in Trafalgar Square. Police on motorbikes were flying around all over the place, as reports went out about our multiple targets.

The police then had another bright idea, to divert cabs back down Whitehall, hoping to kettle us back in Parliament Square...but drivers just U-turned and headed back into Trafalgar towards King Charles.

The knock on affect was devastating to London’s buses which were taken out of service and lined up in streets surrounding Trafalgar Square.  When in the past we’ve protested in Parliament Square, contingency plans were put in place which diverted bus routes. But with all the periphery gridlocked, the contingency plans were useless...so buses were taken out of service altogether and stacked up in the streets.

If the police had left well enough alone, we could of all packed up and dispersed on the dot of 4pm like we used to, but because of the bad decision made by the police commander in charge just before 3pm, the protests carried on causing gridlock till 6:30pm.

It appears that every plan the police put forward, just made matters worse for them, better for us.

Today’s tour was so successful it has now been decided that in future, we will no longer be stationary sitting in the square.

Protesters will be given a starting point and the protests will continue to ‘GO ON TOUR’.

TAXI LEAKS EXTRA BIT:
What the main body of the trade need to take on board, is that the proactive ITA are not a representative group...they are a pressure group. Representation should be being administered by the three orgs and two unions. But don’t hold your breath on that one!!!

Below is a tweet put out by someone who attended today and I think his sentiments are shared by everyone who was there:
I felt proud again today.
We know there’s not enough of us, but those that matter to me, and say everything about the good in this profession were once again there today.
That’s unity, that’s solidarity, the real licensed London Taxi profession.
The ones that care !!!


Tonight, there was a meeting to discuss the Wapping Bus gates and although Taxi drivers from a what’s app group attended, I’m told no one was there from any official trade representative group or Union 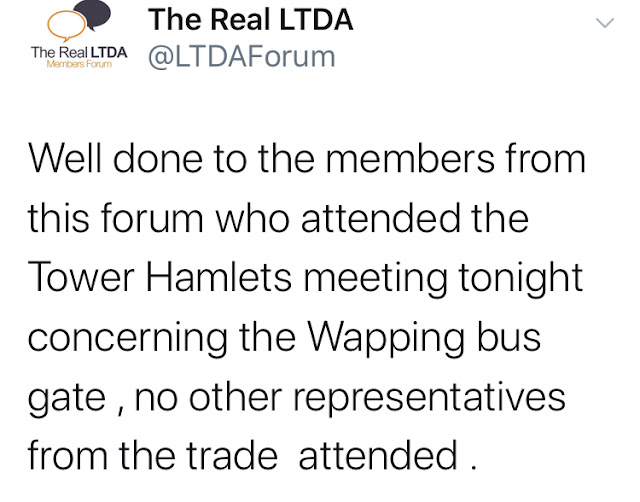 Posted by Editorial at 9:05 PM