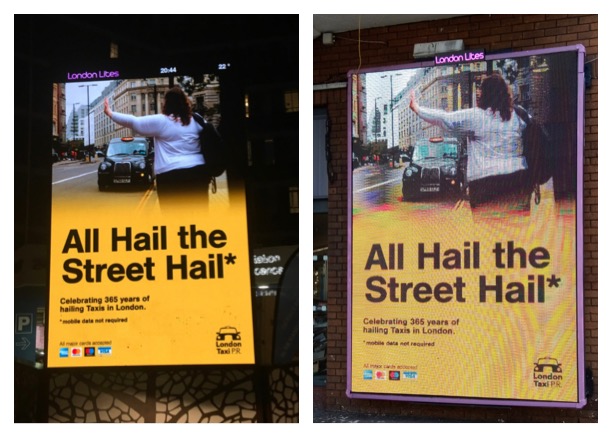 London Taxi PR (LTPR), an organisation which represents the interests of the Licensed London Taxi profession, has announced the success of its most recentadvertising and promotional campaign, ‘All Hail the Street Hail’, which reported combined street and pedestrian viewing reach figures in excess of 36.8m for the month of its duration.

The campaign, which celebrated 365 years of being ableto traditionally hail a London Taxi, went live across 24 prime major billboard advertisement locations throughout central London and has been reported as one of London Taxi PR’s most successful campaigns to date.

Produced in conjunction with digital media out of home advertising company, London Lites, ‘All Hail the Street Hail’ also included the usage and display of the advertisement a number of rooftop signage display boards on London Taxis.

‘All Hail the Street Hail’ not only drew significant response and positive feedback & comments from those within the profession, but was also referred to by London Lites as, ’One of their most interactive and responsive campaigns they have had’.

Speaking about the success of All Hail the Street Hail’, London Taxi PR founder and Director, Lee Sheppard, stated, “This proves just how successful and responsive one of our campaigns can be. Our intention has always been to produce and release a new campaign every month, and we hope that by revealing the viewing stats for this latest campaign will encourage more from the profession, not just drivers but businesses as well, to get on board and support London Taxi PR in what we do.”
Lee added, “We would also like to extend our sincere thanks to London Lites and look forward to working with them again soon.”

The campaign celebrated 365 years of the traditional hailing of London Taxi from the street, and will also carried subtle messaging such as, ‘Mobile Data not Required’, along with a reminder that ALL London Taxis accept all major credit cards as well.

The reasoning behind the campaign was to not only remind the general public how long the traditionalLondon Taxi has been serving and transporting customers in London, but also just how easy and simple it is to hail a London Taxi rather than using your mobile phone, as has been witnessed with the increase in mobile apps to hail Taxis.

Since their formation, London Taxi PR has undertaken aseries of targeted media campaigns, which are being usedby London Taxi PR to promote the benefits, advantages and safety of using the iconic London Taxi to a wide audience.

All the campaigns and publicity that has so far been generated by the company has been funded by fellow London Taxi drivers as well as supportive companies andorganisations, many of whom have signed up to donate to the cause on a monthly basis, indicating how passionate they all are about their industry and the cause.
London Taxi PR. Passionate about promoting and preserving the iconic London Taxi trade and funded byLondon Taxi drivers who care about their industry.


For more information on London Taxi PR and their campaigns, please visit their website http://londontaxipr.com
Posted by Editorial at 3:45 PM