Is this the first dedicated hotel Electric Vehicle taxi rank in the UK? 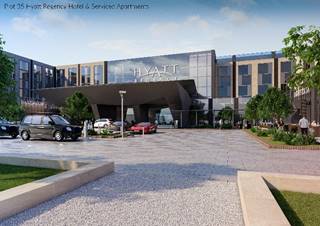 [London: 22 October 2019]: Edinburgh Marina Holdings, the developer of the landmark Edinburgh Marina Scheme, has further established itself as a pioneer in the hotel and tourist industry, having recently unveiled its innovative proposition for a state-of-the-art Electric Vehicle (EV) taxi rank at the Hyatt Spa & Conference Hotel.

Edinburgh Marina’s provision of a dedicated EV taxi rank, will ensure that taxi drivers have access to free, naturally sourced electricity, while waiting for their next fare. This notable feature is believed to be the first of its kind in Scotland and the rest of the UK. The proposal is part of Edinburgh Marina’s sustainability objectives and affirms their commitment to the Scottish Government’s Climate Change plan, which seeks to phase out the need to purchase new petrol and diesel vehicles by 2032, in the hope of significantly improving Edinburgh’s air quality.

Renowned as a low carbon leader, Scotland is paving the way for the rest of the UK, and Edinburgh Marina’s Hyatt Spa & Conference Hotel is a key player in ensuring it remains at the forefront of sustainable initiatives. The Scottish Government has confirmed funding of £20.6 million to support the uptake of electric vehicles through the ‘Switched On’ Towns and Cities Challenge Fund, and the Local Authority Installation Programme. Edinburgh Marina’s commitment to the green tourism market will lay the foundations for other key entities in the hotel industry to follow suit.

The hotel will overlook the new world class marina comprising 427 full-serviced berths, which will be capable of accommodating boats of up to 40m plus in length, with 24/7 access at all states of tide, new homes, for sale and rent, a luxury living for retirement scheme, in addition to Chestnut Yard medical hub and neighbourhood shopping.

Charles Price, spokesman for the Edinburgh Marina Holdings, added: “I am delighted to confirm Edinburgh Marina’s commitment to the environment with the installation of electric vehicle taxi ranks. With an increase in visitors to what will be a world-class destination, reducing carbon emissions wherever possible is of great importance to us.  I would strongly encourage other developers to follow suit with this environmentally friendly initiative. Edinburgh is the second most visited city in the UK and it should lead the way in carbon reduction.”
Posted by Editorial at 10:36 AM