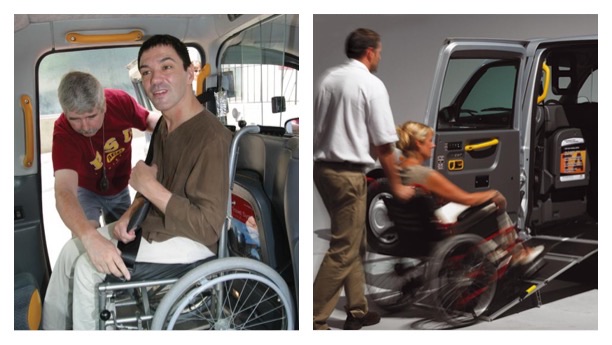 Eastbourne Borough Council is considering introducing new rules requiring all taxis to be wheelchair accessible. Most cabbies wouldn't have a problem with that.....meanwhile, in Eastbourne!!!

The Eastbourne Herald has posted this unbelievable letter from an alleged retired Taxi driver Gary B Jones.

I read this with horror says mr Jones.
This ruling would completely discriminate against the vast majority of disabled people who are unable to get in and out of these adapted vehicles.

This idea was first brought up in the mid 1990s and as a new taxi driver I became a founder member of the MSDCHCA (Mid-Sussex Taxi Hackney Carriage Drivers Association) which was formed to support the interest of taxi drivers and their industry in Mid-Sussex.

We did extensive research with the help of Age Concern, NHS professionals, social services and other interested bodies. A delegation went to the House of Commons with a wheelchair accessible taxi to show MPs the difficulties that elderly and people with disabilities had getting in and out of these vehicles.

The test we gave the MPs at that time was to get in, sit down and get out of a London style taxi on one leg, without bumping your head.

The preferred choice of taxi vehicle, for most wheelchair users who have limited mobility, and for passengers with a mobility issue, is the front passenger seat of a saloon car.

You only have to ask the telephone operators in the taxi booking offices how often they will be asked for a saloon car by the elderly.

In most cases it is quite easy for the passenger, sometimes with the assistance of the driver, to simply lower themselves to sit on the front passenger seat and then turn their legs 90 degrees placing their feet in the footwell.

The issues regarding wheelchair accessible vehicles from a driver viewpoint is that they cost up to five times more to purchase than a saloon car and that you miss a lot of trade by not taking passengers with mobility issues.

For a taxi to carry a wheelchair passenger the driver has to secure the wheelchair to the vehicle and release it afterwards.

TAXI LEAKS EXTRA BIT :
It would appear from mr Jones’ letter, that the London Taxi trade, having purpose built vehicles, completely accessible by all forms of the disabled community... have in fact been wasting our money for many years.

This (alleged) cabby, is saying that we would have been better for all these years with ordinary saloon cars.

This was not on the letters page, but actually posted as an article.
To be honest, I’m amazed that any paper, be it nation or local, would post such a letter as an article.... must have been a slow news week!
Posted by Editorial at 3:55 PM