Another Setback For How Dare You, Know-it-all Climate Alarmism, But A Win For Resilient Nature. 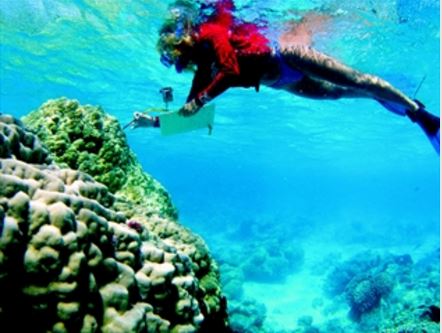 For the first time ever, scientists have found corals that were thought to have been killed by heat stress have recovered, a glimmer of hope for the world’s climate change-threatened reefs, says Phys.org

The chance discovery, made by Diego K. Kersting from the Freie University of Berlin and the University of Barcelona during diving expeditions in the Spanish Mediterranean, was reported in the journal Science Advances on Wednesday.

Kersting and co-author Cristina Linares have been carrying out long-term monitoring of 243 colonies of the endangered reef-builder coral Cladocora caespitosa since 2002, allowing them to describe in previous papers recurring warming-related mass mortalities.

"At some point, we saw living polyps in these colonies, which we thought were completely dead," Kersting told AFP, adding it was a "big surprise."

Coral are made up of hundreds to thousands of tiny creatures called polyps that secrete a hard outer skeleton of calcium carbonate (limestone) and attach themselves to the ocean floor.

Heat waves kill these animals--by either essentially roasting them alive or causing them to eject the symbiotic algae that live within them and provide them nutrients, thus leading to coral bleaching.

A quarter of the coral cover of Spain’s Columbretes Islands was lost to a particularly extreme heat wave in 2003.

Time running out????
But the researchers found that in 38 percent of the impacted colonies, the polyps had devised a survival strategy: shrinking their dimensions, partly abandoning their original skeleton, and gradually, over a period of several years, growing back and starting a new skeleton.

They were then able to gradually re-colonize dead areas through budding.
In order to be sure the polyps were in fact the same animals staging a comeback, rather than new coral created through sexual reproduction, the team used 3D computer imaging to confirm the old, abandoned skeleton was connected to the new structure.

This process of "rejuvenescence" was known to exist in the fossil record but had never before been observed in coral colonies that exist today.
Kersting said the finding opens up the intriguing possibility that other modern corals around the world--such as those in Australia’s dying Great Barrier Reef--might be applying similar survival strategies, though further investigation is required.
TAXI LEAKS EXTRA BIT :