This Isn't Tech, This is A State Assisted Take Over Of A RegulatedTrade ? 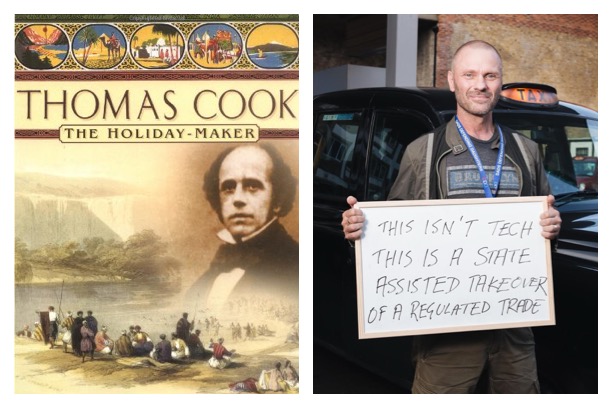 This week heralded an extremely sad event....A 268 year old quality travel agency, Thomas Cook, has been taken down by the Gig economy.

We’ve seen the effect the Gig economy has had on our trade, a quality trade that was given a charter to 'ply for hire' almost 370 years.

Under TfL, while our standards remained high, we’ve seen our competitors standards fall dramatically, with passenger safety put to one side, local knowledge pushed aside... by an unreliable technology that often doesn’t seem to work as claimed.

We've also recently seen 13,000 drivers with criminal records checks alleged as fake, along with fake medicals, swept under the carpet by the regulator....and passengers (who we’re told) want no more than cheap as possible.

We have a lot in common with Thomas Cook, a business man with a philanthropic vision for quality. His first business venture was to facilitate easy travel to and from the Great Exhibition in 1851. He then turned to organising tours of Europe in 1855 and later in 1866, he expanded his tours to the United States.

Today people no longer look for quality and have allowed cheap cut rate operators to enter the market, packing in passengers like cattle and stripping all extras to the bone.

The quality of the London Taxi trade, was enhanced around the time of the Great Exhibition by the addition of a "Knowledge of London" requirement for drivers. A course unique to London, The Knowledge has never been equalled by any other Taxi service, anywhere in the world.

Just as Thomas Cook have been bought to their knees, our trade’s regulator -who have allowed cheap, artificially cut price, unsafe competition, to use a form of predator pricing (which incidentally is illegal)- has bought us to a point where we could eventually see our trade (burdened by escalating expenses under the banner of so called progress) eventually swallowed up into a third rate one tier service.

The Licensed London Hackney Carriage Trade, now awaits with baited breath, as Ubers probationary licence is up for renewal this week. The fact that Uber contravened the terms of its 'Probationary' licence (awarded to them by Chief Magistrate Emma Arbuthnot) seems to have completely escaped retribution from our regulator.

TAXI LEAKS EXTRA BIT:
Then...just when you think it couldn’t get any worse, news breaks that Gett surge priced a customer on a Sunday afternoon and that customer was livid.

And the customer has smashed this all over social media...

Another nail in our coffin ??? 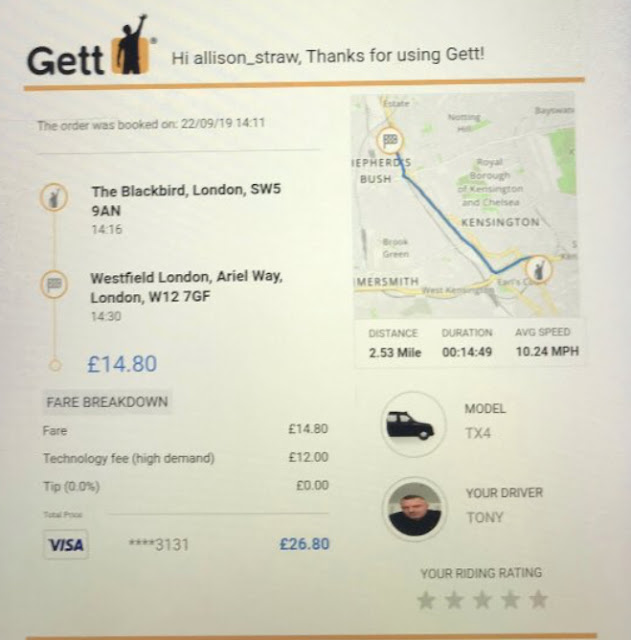 Posted by Editorial at 1:20 AM

I have never been a fan of these booking apps. Why free men/women would willing tie nooses around their own necks, I just can't understand!
If the public want to book me via an app, then the only one they will find me on is Taxiapp. And I can confidently say that they will pay no more than the metered fare, since it costs them nothing to use the app. In fact I am paying for it!
But better to keep it in-house than to allow companies who don't give a toss about us, to sell our own work back to us!

Dump the apps, unless they are a cooperative run by drivers. We do not need the sort of bad publicity that is slowly but surely destroying the likes of uber. We need to be seen as being honourable, none of this playing around with the meter fare based on surges. And also none of this businessmen taking 15% of our money, or soon it will be 20% etc etc. We rely on goodwill.