PHVs Are Now Allegedly Cloning Number Plates To Cut Down On Running Costs. 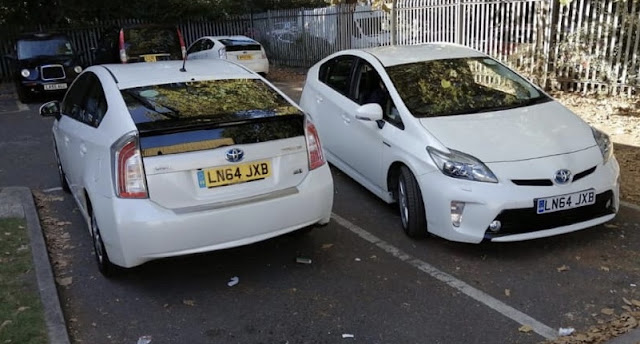 The Photo above was taken at the Canning Town Test Centre.

So now we know why there are so many PHVs in Central London. Every street, every main road is full of identical Prius PHVs.

They only need to get one Prius passed at NSL and then two, three, four or five Prius, no matter what condition, can all work. Plus are they all working different cars off the one insurance?

But how do they all manage to work the Uber app on different phones.... surely Uber have systems in place to stop this .... ha ha ha!!!!

Once the new cloned plates are fitted, all charges become insignificant when share between two, three, four or even five drivers!!!

Going on TfL passed performance over the last 24 months, I wouldn’t hold your breath. They no longer seem to be concerned with compliance when it comes to Private hire....
But, God forbid a licensed Taxi driver should touch their mobile phone while sitting stationary on the rank at Kings Cross, they have an army of undercover Cab Enforcement officers with video surveillance to nick you. 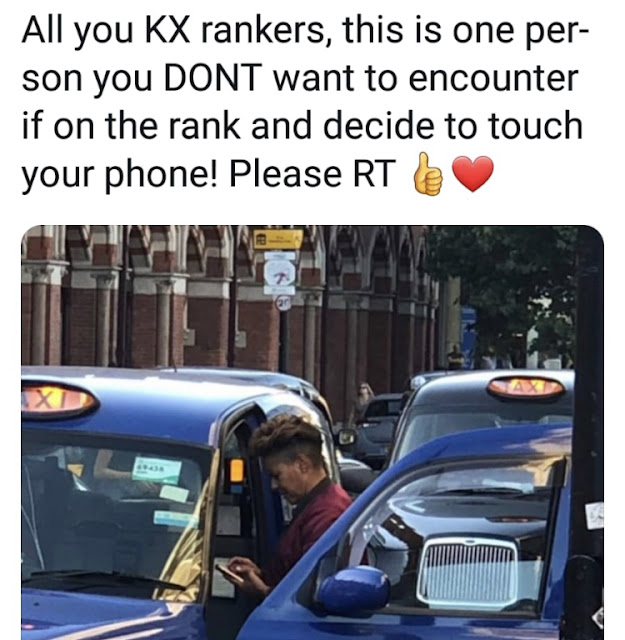 We’ve recently witnessed TfL’s biased attitude towards Taxi Drivers when  two COs turned up at a drivers home and demanded his badge and bill because he hadn’t returned his 50 year medical form.

The driver said he hadn’t received one in the post but they still demanded his B&B.

Lucky for the driver, he was in the LCDC who’s legal team (never lost a case yet) managed to sort it out. She was able to get him his B&B back and the driver is now back on the road, working again.

Posted by Editorial at 7:34 PM

First ride-share, now plate-share and insurance-share. I am told we always complain because we are losing to technology. Should we follow?

Funny, Im waiting for my medical forms to arrive too, It strikes me as very odd how TFL dispatches staff to home addresses of taxi drivers to coerce drivers into giving up their bill & badge rather than have spare medical forms at hand in the likely event that the original posted forms have gone astray, that would have been a far better resolution to this situation
& highlights an agressive attitude of TFL, pity.

Why haven’t they got spare forms at 230 Blackfriars, it’s scandalous

What an absolute joke everything is now, connected to London. On looking at the details associated to this Sunday's ridiculous and pathetic car free day (it'll be lovely for all those on the boundaries of this) it is astonishing. How on earth are people who are infirm or disabled, going to attend any functions within this area. A disabled person I was speaking to is supposed to be attending a social occasion in this area on Sunday. However, they may now have to forego this, as using the tube is a no go and normally this person is driven by a relative or uses taxis, etc, to go door to door. It's a complete disgrace this whole car free scam and noticeable is that cycles are being encouraged to use the car free zone but then again, they are the saviours of the planet & will creep about at 5 mph.......NOT! Although, at least it will save on electricity being used to power the traffic lights, as they never stop at them anyway and no vehicles will be around. As they say .....the lunatics have taken over the asylum!