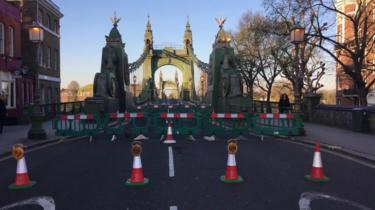 Private vehicles and buses are banned from using the bridge but pedestrians and cyclists can still use it
Hammersmith Bridge could cost £120m to repair, engineers have estimated as the first stage of work begins.
The 132-year-old bridge was closed indefinitely to motorists in April after "critical faults" in the cast iron casing were found.
Transport for London (TfL) has financed the first £25m of the project but the main funding source has yet to be decided.
The work is expected to take three years to complete.
The £120m estimate could change due to the "unknowns, complexities and challenges" of the bridge, the authority said.
Council leader Stephen Cowan said there had been "significant failings" in the bridge structure which has seen cracks appear in some of the pedestals.
"We're focused on getting the bridge reopened to cars and buses as quickly as possible", he added.
London Borough of Hammersmith and Fulham
Cracks appeared in the north west and south west pedestals of Hammersmith Bridge
Hammersmith & Fulham Council is working with TfL to secure funding for the next phase of repairs in spring 2020. 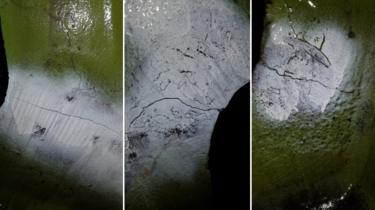 The Chinese will built it in six months
at a quarter of the price.
There rest over here is cream off the top money.

bad maintenance, Cast iron has been in use for years on north sea oil rigs and go through a lot more movement than this bridge. This is also down to the clowns who drive the buses over the bridge there was always two on the bridge at any time of the day.

The bridge outside Twickenham station (London road ) has got to be replaced because of the buses
Again because TFL failed to monitor the weight of two buses passing by each other.
Deep joy.