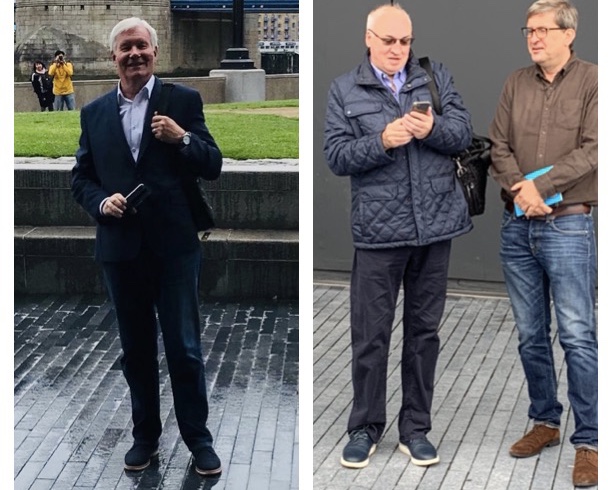 The meeting was basically a follow up, after Cllr Kurten tabled a motion on Thursday, asking Mayor Sadiq Khan not to implement the new Taxi age limit of 12 years on Euro 4-5 Taxis and to reinstated the availability of the new Vito plus Euro 6 currently being licensed as PH vehicles.
This statement was put out by the London Assembly Thursday night:
“Black cabs are a great London institution”.
However, the black cab industry has been affected by a series of measures, including the plan to reduce the maximum age of an older licenced taxi from 15 to 12 years. In addition, there has been no competition in the taxi sales market for nearly two years. It’s clear the Mayor’s approach will force taxi drivers out of work and cause hardship for many.
We want the Mayor to go back to the drawing board and re-think his proposals.
That’s why we agreed a motion to call upon the Mayor not to reduce the maximum age of a taxi from 15 years as this will hurt taxi drivers. End. 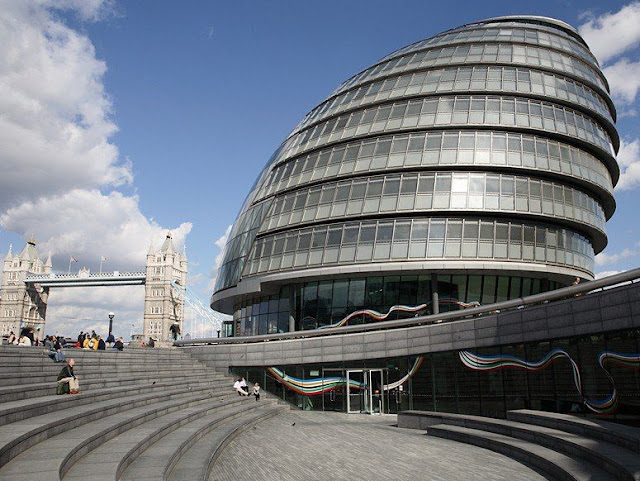 I was personally asked to attend the meeting at City Hall, to relay my views on the damage being inflicted on the older drivers in the trade. As an older driver myself, I had my own plan of exit from the trade. Although I used to regularly change my vehicle every three years, I decided back in January 2012, this time I would see out the 15 years life span of the cab which now has reasonably low mileage, as I’ve cut back on my actual working hours, approximately 16-20 hours a week.
But with the Mayor’s plan to reduce the age limit from 1st of November to 12 years, I've had the last three years of my profession stolen from me. My peers of similar age, who were renting older, cheaper vehicles, have had the cabs taken back from them by greedy garages to decommission through an extremely badly thought out scheme, and have now found it almost impossible to find similar cheap rentals.
The cafe' I go into at night to socialise with my colleagues (which used to be packed) is now almost  deserted most nights.
I also took the opportunity to point out to Cllr Kurten, TfL’s secretive agenda to cut the trade down to approx 13,000 drivers (Project Horizon).
This was uncovered back in 2007, but appeared to be shelved when superseded by the ‘STaN report’, which saw the introduction of ‘Satellite Offices’.
With the advancement of so called progressive technology, the need for satellite offices diminished as customers started to use mobile phone apps instead. But, in many peoples opinion, with recent events, it appears that project Horizon could be firmly back on the table.
With the increase in decommissioning from the further funding, apparently ‘found’ by the Mayor, we have seen an extension to the ratio between Taxi drivers to vehicles. This has all the hallmarks of being agenda driven.
Weekly figures put out by TfL don’t truly reflect the extent to which this is actually happening.
Reason being, many of the Taxi drivers who have retired or found other employment, have kept hold of their Bills (TfL licenses) rather than giving them up completely, just incase next year, we get a more sensible and understanding Mayor, who will return common sense back into the regulation of the trade.
TAXI LEAKS EXTRA BIT:
Also, I took the opportunity to point out to Cllr Kurten, the adverse affect that making PHVs pay the current congestion charge, has had on the night shift. PHV drivers are now coming into town en masse  in the evening and are flooding the centre, causing major congestion most nights.
The extra PCO’s that Khan boasted he’d trebled, have been dramatically reduced and integrated into bus/tube revenue protection. The nightly fight for rank spaces in the Mayfair area, has become a free for all... with TfL and the Met apparently abandoning any form of compliance.
TfL are also no longer taking complaints of private hire contraventions on Taxi ranks, through their @TfLTPH Twitter account, which now appears to be unmanned.
I made the suggestion to Cllr Kurten that to revert back to normal, the congestion charge should either be scrapped for PHVs or made payable over the 24 hour period, as is the ULEZ Charge.
News from the Independent Taxi Alliance today:
Because of the lack of enforcement from TfL or Westminster Council regarding the illegal parking from lorries delivering to the Balfour Beatty site on the Palace Street Taxi rank, the ITA will be calling a series of protests to close all entrances to the site over the coming weeks.
More details on this to follow soon. 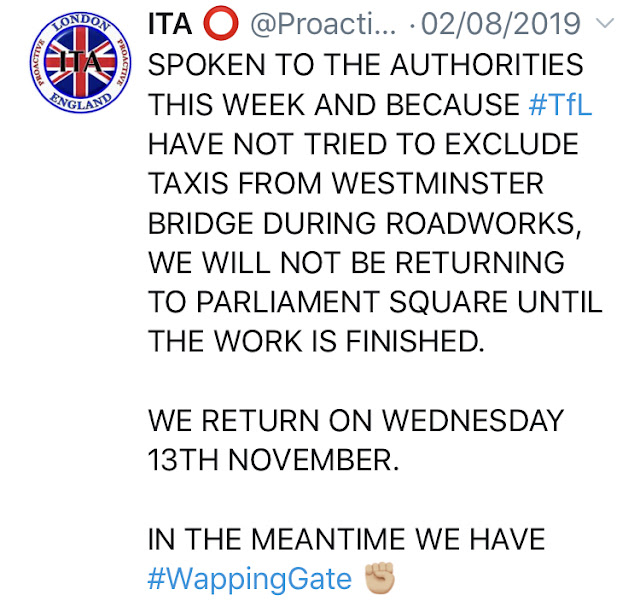 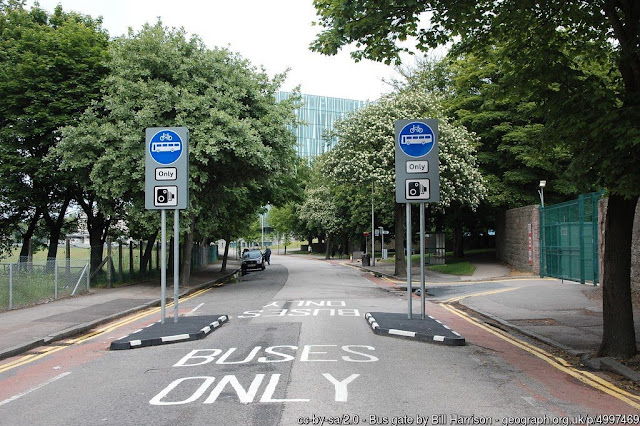 I don't Understand your argument?

Why has your plea to the GLA to abandon the coming 12 year limit restriction for TX4's & Vitos soon to affect all cabs (except euro 6 & electric) but ignoring the TX2's that are the first to be affected?

If you hold a modicum honesty in your arguement you will know that the whole emission basis revolves around servicing and I am certain you, I, and many others have followed euro 4 & Euro 5 taxis on the road that have produced twice as much smoke as other euro 3 tx2's and this whole explaination proves the laughable nature of targetting specific euro levels in a 'divide and conquer' attitude.

When Boris brought in the 15 Year limit nearly 8 years ago guess what taxi was being sold as new?

It is Pure hipocrisy!

When Boris bought in the 15 year limit the Taxi sold by LTI was the TX4!!!

To be honest, I believe time has appeared to have run out for the TX2... which as the first causality, will all have to come off the road in 7 weeks time.

Most have been decommissioned anyway by garages.

The motion carried by the GLA was across the board and would reverse the mayors decision to change the life span for all remaining vehicles.

Personally, I believe if your vehicle can pass to TfL and MOT standards, it should be plaited regardless of age because the mayors argument on pollution levels is not based on facts, it’s based on guesstimates.

This new agenda is being bought in, not to improve air quality (as most of the Euro 3-5) can deliver better pollution readings than some euro6s.

Jim just a thought with the knowledge now at an all time low why don’t TfL look at anyone who was on the knowledge in the last 3 or 4 years who where on appearances but had dropped out for what ever reason financially lacking in guidance. Let’s say that there in 35% who did drop out at any stage being 21s28s56s Why don’t TfL contact them and get them back on track even if we only get 20% back on the Knolwedge it’s a start maybe even. Get the lcdc to set up some sort of knowledge school you have enough knowledge between you all to set up something and I’m sure its a step in the right direction let’s get TfL to see just how many people have dropped out on any stage in the last 5 years and find out how we can help them become the best xx