TfL To Kick Taxis Out Of "Priority Lanes" To Try To Halt Falling Bus Rider Numbers, By Speeding Up Journeys

TfL are to introduce a new network of 24 hour priority bus corridor lanes in central London after a sharp decline in bus usage....to help deliver the Mayor Sadiq Khan’s reach his target for 80 per cent of journeys to be made by sustainable transport modes by 2041.
With e-hail on demand minicab apps trying to price each other out of the market, many passengers are switching away from buses and tubes, into these cheap minicabs who can avoid the most congested routes... adding to even more congestion on so called quiet routes. The situation hasn’t been helped by council planners, with their ridicules new road schemes.
As buses sit in the congestion, ridership has fallen dramatically with officials at Transport for London blaming slowing traffic speeds caused mainly by their own incompetent traffic planners.
Despite the Mayor’s fares freeze and the introduction of the hopper fare which allows passengers to take multiple buses for a single fare, the number of bus journeys still fell again in 2018.
Concerns have been expressed by London Assembly members and passenger watchdog London TravelWatch that TfL and City Hall’s decision to axe and curtail some bus routes will worsen the decline.
A paper to be presented to TfL’s Programmes and Investment Committee next week sets out a number of measures designed to avoid this.
Yet not one word about the affect of the loss of road space to segregated cycle lanes.... also seen to be causing massive gridlock throughout the capital.
The changes include "developing a core network of reliable bus services in central London, through the provision of bus priority lanes," reviewing bus lane hours in partnership with boroughs, and providing orbital links.
In addition, a "new, holistic" approach to road schemes will be adopted, including a requirement that the needs of bus passengers "must" be considered when drawing up new projects.
We could also see access to more roads, completely lost to the trade on a scale never seen before.
Source : MayorWatch.co.uk
TAXI LEAKS EXTRA BIT :
This is bad news for London’s Taxis who up till now have been included in most of central London bus lanes.... this is all about to change with the all new Bus Corridors.
Not one word so far from the Taxi Trades largest org who recently congratulated the Mayor on doing a fantastic job....
The more militant band of Taxi drivers (ITA), have been protesting in Parliament Square every week since January under the banner "Where Buses Go, Taxi Go", claiming that any exemption is discriminate to disable and vulnerable passengers.
Yet again the Trades largest org’s General Secretary called the protesters ‘Loonies’ in an apologetic email to TfL’s commissioner Mike Brown.
In every practical sense these new priority lanes are no more than bus lanes. But looking again at the original statement from City Hall sources, they are not called priority bus lanes, they carefully use the phrase ‘Priority Bus Corridors’.
This is no coincidence. In our opinion it’s because there is case law to protect Taxis having fair use of bus lanes. TfL have purposely changed the name so they can legally exclude Taxis.
Will you wait and see; a policy that lost us the Bank Junction and could lose is Tottenham Court Road?
Or will you fight ?
Don’t say you haven’t been warned. 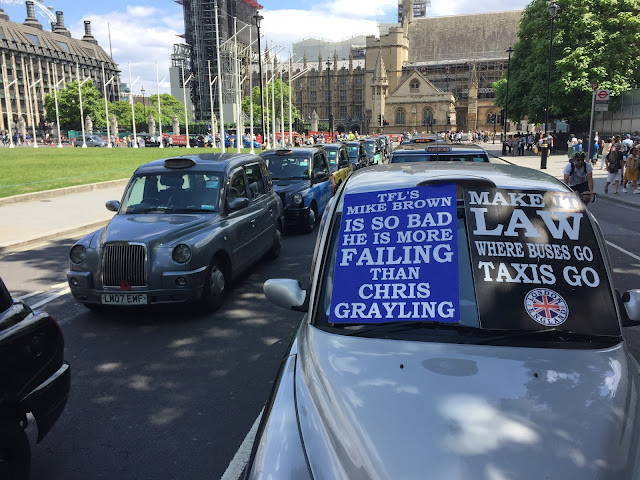 More than ever now we have to enhance the fight for "Where busses go, Taxis go". We must continue the demos on Wednesday but we need to also ask drivers for more ideas to enhance this battle. It is an absolute disgrace the way the mayor of London seems to be plotting our demise by exclusion from bus lanes.
Some ideas I may offer would be:

Cab firms sponsoring an advertising campaign by adverts on our taxis.

Writing to ever MP in parliament for an answer to this issue.

An on-line petition for 100 000 signatures so parliament would have to debate the issue.

Perhaps some demos in the city over bank junction.

Tell as many customers as possible about this situation. Word of mouth can be very effective.

Another important fact we need to fight is the myth that there is nothing we can do to change our lot.
WE CAN CHANGE THINGS IF OUR CAUSE IS JUST A ONE AND BROUGHT TO THE RIGHT PEOPLES ATTENTION.

Dear Mr Bar
Unfortunately, you are forgetting the most important thing that is missing from your suggestions. This is the apathy and laziness of those who wish to do nothing and offer little support other than moaning about their plight. However they are more than willing to merrily work on a few hundred feet from the square every Wednesday. They then stop for tea later in many watering holes, complaining that nobody is doing anything! If they all put their mind to it and put themselves out, who knows what could be achieved. Look what happened with the Tooley Street consultation; it probably had the biggest support and response to any consultation by those in the trade. Whereas other highly important consultations have been ignored but responded to fully - and at a terrible cost to the trade - by all the cycling groups in and out of London.(And there have even been responses from many other groups/ associations not even in London. How is this allowed when to vote in any London election you have to be a resident of London?😡)
So Mr Bar it's over to you for some advice😀.

On the plus side, glass half full, when we are all out of work and signing on, we will be able to get to the dss office quicker, on the bus , its not all bad is it?

First of all let me thank you for your polite response to my post.

One crucial aspect any successful campaign needs is a LEADER. We need a charismatic, strong, popular,level headed, intelligent, realistic, ruthless leader who understands the relevant circumstances that prevail today in our trade.

The leader would need to be an excellent orator who would be visible and among the cabbies on the front line of the demos. The leader would be democratic, law abiding and know to always act within the law.

If we find this leader amongst us then most of the cabbies would follow and back the leader. Where is this leader among us who would be dedicated to the task?A man who totally believes in his mission.

Without such a leader the ship seems to be all at sea without direction.

Hope this helpful and be lucky out there.

In reply to Hugh Bar.

Good luck with the search Hugh, it would be easier finding rocking horse shit!

It's so stupid to ban taxis from using the bus lanes they are currently using because it clearly suggests we are the obstacle to their speedy network.

I know this will lead to further delays on the bus services as demonstrations take place to oppose TFL's stupidity, so surely tfl should harmonise our contribution by placing intermediate traffic signals as certain spots like gower street (when the roadworks end) to prioritise flow.

Who dreams up the confrontations between us and tfl?

Can I make a quick point regarding those that don’t protest. Most drivers now are, and look at least over 50. Many are much older. The descent of the trade has taken place over a good few years. With every single decision going against the trade. Street work, is non existent compared to years ago. Ranks are over flowing. Every app, credit card company, now takes considerable sums off us every week. How many drivers actually add up the yearly fees total?. Many of the drivers have done long hours, years on end. Some for decades. The work was easier to get, the money was more reliable. Now with the lack of cabs in the trade, we are all being encouraged to sign up to enormous pcp loans to finance an electric fleet. Unless you are a new driver, or younger, who in their right mind, over 50/60, wants to work like a dog, when they have already had enough of it. I’m afraid the long term future of the trade is not in most drivers interest. And that could be partly why they don’t have as much support as maybe they would have got years ago.

7.20pm: A response to your comment; it could be deemed as a valid perception by yourself but it has one significant and relevant flaw. Those who organise, support and are at the protests EVERY time are in the majority over the age of 50+ & significantly older - with many in their 60's. Consequently, your comment (with respect to you) and your perception are not correct. This is mainly because those older drivers know what has been taken away from them. Whereas the younger drivers don't know any better and have been brainwashed into thinking everything now is normal. They have also been persuaded/forced into taking out massive loans and pcp deals, etc and can't spare any hour to protest. Therefore, I can only suggest it is the older generation who have the time and inclination to support protests & the younger element (not all) have been browbeaten into submission!!!! Very sad but unfortunately true☹️☹️☹️.