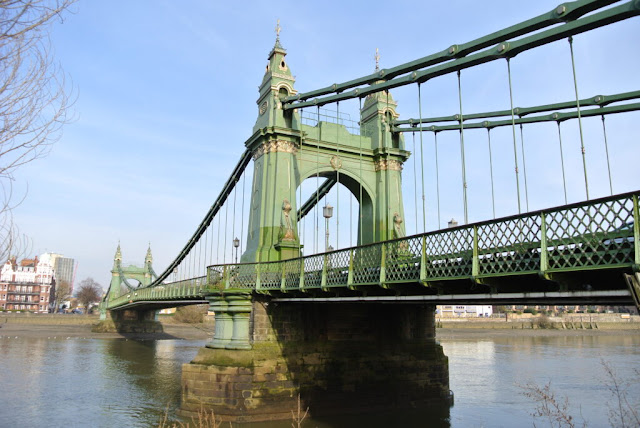 Hammersmith Bridge could remain permanently closed to motorists, a senior Transport for London (TfL) director has revealed.
Speaking at New Civil Engineer’s 'Future of Roads' conference, TfL director of project & programme delivery Nick Fairholme revealed that TfL is working up several options for the bridge with Hammersmith & Fulham Council.
The bridge has already been closed for almost three months, after hairline fractures in the cast iron “pedestals” were discovered.
Fairholme revealed that there are three main options being worked on.
The first option would be to keep the west London bridge as it is, carrying out no repairs and leaving it as a cycling and pedestrian bridge.
The second option would be to carry out a partial repair to the bridge to allow it to open to motorists but restrict its weight load to only single-decker busses and localised traffic.
While a third option would be to carry out a full repair to the bridge, however Fairholme concluded that would be a “very expensive” option.
Although Fairholme would not be drawn on an exact cost, New Civil Engineer understands that the total cost of a full repair could be as much as £100M with work estimated to take around three years.
“First and foremost it is important to stress that even though the bridge is owned by Hammersmith & Fulham [council], we [TfL] don’t want to lose it,” Fairholme said.
“Unfortunately the bridge is in a poor state. However, we do believe that it is cost effective to reopen it. We believe it can be reopened, however it is not going to open overnight.”
He added: “Although we want to reopen it, [a full repair] is not going to be a cheap fix.
“If there is public support for leaving it as a pedestrian and cycle bridge then we will have to consider that.”
Despite Hammersmith & Fulham council previously stating that it would like to see the bridge “restored to its Victorian splendour”, council leader Steve Cowan has recently come out in support of a Hammersmith tunnel as a replacement to the bridge.
The idea of a 'Hammersmith tunnel' has been mooted for years, and Cowan believes that the bridge woes make it the right time to "pick it back up".
The bridge, which was built by Sir Joseph Bazalgette, has been the centre of controversy in recent years. In 1998, the bridge was subject to a 7.5t weight limit due to concerns around the health of the structure. This resulted in wardens policing the bridge to ensure only one single decker bus crossed at any one time.
Then in 2018 it was revealed that Mott MacDonald was to carry out extensive testing to establish the extent of the strengthening work required to allow the weight restrictions to be lifted and double decker buses to use the crossing.
Owner of the bridge Hammersmith & Fulham Council announced a feasibility study and preliminary design for strengthening works was to be completed by the summer last year with work starting on site at the end of 2018. However this was delayed, and in April this year the bridge was closed indefinitely after hairline fractures in the cast iron “pedestals” were discovered.
Political rows over funding appear to have contributed to the closure. In a statement published at the time of the closure, the council blamed government cuts.
“We have a fully tested plan to refurbish the bridge and we’re ready to start work,” Hammersmith & Fulham said. “But, due to government budget cuts, Transport for London (TfL) says it can no longer fund the planned refurbishment. This is a huge disappointment.”
A decision on the bridge’s future is expected to be taken in August.
TAXI LEAKS EXTRA BIT :  By Len Martin
Transport for London knew they were damaging this bridge with their buses but decided that their Bus management team knew better than the civil engineers. Their arrogance staggers me....
Notice the opening piece "unannounced and unexpected a team turn up to monitor buses" -  or translated = "oh sh*t we been rumbled better get there quick and look like we care because the TV cameras are filming today"
https://youtu.be/9cWsKernYD4
Posted by Editorial at 10:31 AM

Fantastic news for all the residents who cycle, no pollution billowing out of cars and buses, no traffic problems near bridge and no hands cycling! I might take in a spot of fishing off the said bridge on the way home from work, its a win win from me!

No money to spend repairing a real bridge, yet millions wasted on a non-existent Garden Bridge!! TFL needs closing down. Not fit for purpose.

It is an absolute disgrace that such an important river crossing is out of use for so long and perhaps closed for many years to come or permanently. Mind you, TFL has openly admitted that they don't care less about motor traffic and want to drive the long suffering public onto the overcrowded public transport system. Is there a legal case against TfL for compensation for the inconvenience and extra cost for circumnavigating the closed bridge? A class action by local residences.

The IRA tried to blow it up twice, Now the local council wants to close it, The Bridge is plagued with bad luck or uncertainty so it may be a good idea if another was built next to it as GLA has loads of dosh when it looks to support road schemes linked to either cyclists or other loony causes.