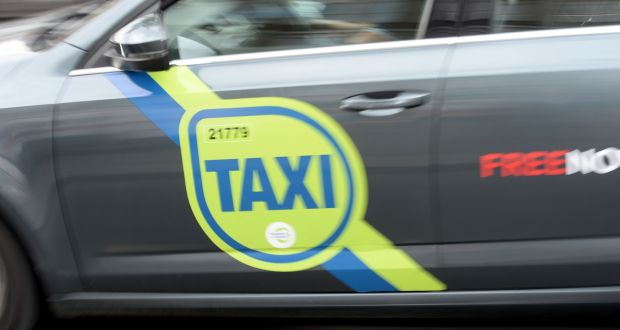 Parked at the end of a long queue of taxis that spill over into the adjacent lane near St Stephen’s Green, taxi driver Adidemi Lugboso (51) says there is one glaring problem he faces as a cab driver in the city.

“There’s too many taxis,” he says. “There’s as many taxis here as New York.”

Several taxi drivers said the number of cabs on the street can be overwhelming and the over supply was not enough for them to regulate unlicensed drivers.

“Nobody’s listening,” says David Heavey (57), waiting for a fare outside Dublin Castle. “If you report someone you never hear back.” (Sounds familiar)

“It just goes flying around in the cloud,” agreed Sean (53), who declined to give his last name. “Nobody ever acts on it. The punishment doesn’t fit the crime.”(again, sounds very familiar)

Waiting in line outside the Westbury Hotel on Grafton Street, he says he couldn’t remember the last time the enforcement team came to him to check on his details.

He maintains that customers focus too much on Friday and Saturday night when taxis are in high demand, but don’t care about the rest of the time when the streets are flooded with cabs.

“Where are you on Monday, Tuesday, Wednesday and Thursday, you know?” he says.

The DriverCheck app allows users to enter the number located on the side of the taxi and compare the photo and name to the person driving the car. If no information comes up, the driver is probably not licensed. The problem, according to the drivers, is there is little enforcement.

Pulling on a cigarette next to his taxi parked in the line along the quays, Seán Nolan (44) agrees with the claim of a lack of oversight and response to illegal taxi drivers.

“We can’t make a complain,” he says. “If we find a taxi on the rank that is isn't legitimate, or not on the driver check app, we can’t report them. It has to be a customer [who reports them]. What use is that because not all customers will check the system to see if that driver is legit.”

Nolan, like many other drivers, does not see the introduction of Uber as contributing to their problems. Unlike in many other countries, Uber drivers in Ireland must be licensed in the same way as taxi drivers.

After discussing this with a couple of Dubliners, apparently a couple of highly relevant things happened in Dublin - associated to taxis.
Firstly the authorities apparently deregulated the taxi trade and secondly there was a massive influx of labour from the EU. This influx of labour then impacted upon the Dublin taxi trade, via obtaining licenses for taxis. (As stated the trade was deregulated and more licenses were issued and obtained by this incoming EU workforce.) This then caused a massive oversupply of taxis and more to the point many drivers lost thousands of pounds, linked to the value of their licence due to deregulation. This obviously caused a lot of animosity towards the authorities and the incomers, who were seen to be adding fuel to the fire - in regard of deregulation. (It was also stated that certain drivers were informed they could only work certain areas and ranks.)
How true this all is, I don't know but if true what an example of the authorities causing massive problems for an industry that worked well. Also, another example of how the free movement of workers, via the EU, is impacting upon the indigenous working classes. And the media /chattering classes wonder why the working class of GB voted to leave the EU and they say the Brexiteers are thick &!uneducated.🤪😂😂😂!!!

Your whole country has been ubered.
Just like the rest of Europe diversity is a good thing.
As all the arse wipes in parliament keep telling us.
Now shut it and do as your told.

Perhaps with the UK leaving the European Union there shall be less Private Hire drivers as apparently most of them are foreign, hence the proposed English test.
Was in Dublin recently and it was obvious to see the over supply of taxis.

Boris shall led us out. The people have spoken!

In Boris we trust! Apart from letting uber take our monies, he is a truly great guy!Lets face it, who gives a fcuk about money, career, driving all day, when we can be out! Boris will look after us no matter what! Out means out!

Boris has done it! He might have finished our trade off, with his prime minister and chancellor, but alls forgiven, who wants to drive 12 hours a day , 7 days a week anyway? The Eton boy will make amends and look after us, and after oct31 we are all going to be smoking cigars and booking holidays, now with a strong leader this country is going to boom, with all that lovely lolly we all going to have in pocket we will only be using taxis to take the mrs out to posh restaurants or to the airport, the eton boys gona share the loot to the whole country, good times ahead, out means out!

Does any one remember the word Luddite?

Does anyone know the term "2ero hours contract" ? You better start learning it if you don"t, ,as if you not retirement age, this is a strong possibility of your next job terms, and "minimum wage", another term you better get used to! Got a feeling 5.59 is not going to be needing these terms, he will be working 18 hours a day, 7 days a week, driving his 67k electric state of art taxi, nothing luddite about it, except all the hours sitting in it will be paying it off!