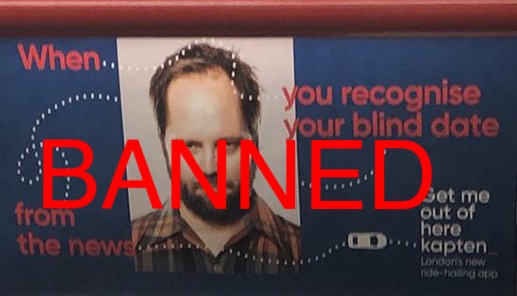 Transport for London has now had to apologised for any offence caused by an ad that it had authorised for minicab ride-hailing app Kapten, that it said it approved "in error" (no the first, this is becoming a regular issue with woefully inadequate TfLTPH)
The campaign themed "Get me out of here" showed a picture of a sinister-looking man. Around the image, the wording: "When you recognise your blind date from the news… Get me out of here Kapten."
TfL have been contacted after a number of critical comments about the ad. Mollie Goodfellow tweeted a picture of the ad, commenting: "It’s funny because women might meet a murderer or rapist on a blind date and might need to escape to protect themselves."
The funny thing is that what people don't seem to understand is that drivers who will be working for Kapten, are the same drivers who work for other e-hailing Apps, like the biggest one who's drivers were responsible for over 50 serious sexual assaults last year along and rising year on. So, an unsuspecting vulnerable passenger could in fact be going from the frying pan into the fire!
TfL said it had decided to take the ad down. This is the second add in recent weeks. A ViaVan ad had previously been removed after showing on of its minicabs, unlawfully picking up passengers whilst parked on a zebra crossing.
The question still remains through......how are these adds being approved to be placed in front of the public?
Who at TfL, is responsible for these offensive advertisements?
And what are TfL going to do, to insure these type of issue doesn't happen again?
Kapten also apologised for any offence caused and its London general manager Mariusz Zabrocki said: "We received the first complaints on Friday and we started taking down this ad on the same day.
"TfL contacted us on Monday and we decided together to take it down everywhere in the TfL network immediately."
TfL provided the following statement: "This advertisement was approved in error and we apologise for any offence it has caused. We are working to ensure that it doesn’t happen again. The advertisement does not meet the requirements of our advertising policy and is being removed from across our transport network. Kapten have also said they will not use this poster in any future campaign."
The matter may have been escalated by Siân Berry, the Green Party London Assembly member, who replied to Goodfellow’s tweet yesterday morning with a promise to ask the mayor "how that happened".
Sian went on to tweet "It literally jumps at you with offensiveness and there are supposed to be checks, TfL themselves have good adverts on safe travel so how it was missed I don’t know. Grim."
TAXI LEAKS EXTRA BIT :
Recently we complained to TfL about this ad on London buses showing a minicab with an illegal door ad. London's Taxi licensing administrator, who are supposed to be impartial, and enforce legislation laid down by parliament, have grossly failed in their duties.
It's often been the case when Private hire companies have contravened the Private Hire act 1998, they have turned a blind eye and refused to carry out the enforcement laid down by the act.
Taxi Leaks recently complained about the VisVan Ad showing a minicab picking up passengers on a zebra crossing we waited for a reply but had to complain a second and third time.
By he time we received a reply, we were told that the VisVan campaign on network stations and in Tube trains, had now run its course and been replaced by new adverts. Also, the VisVan ad had a comment that was totally untrue. At the bottom it made the statement...."London's samartest, cheapest and greenest rides"....as the company were usinging euro 6 Diesel engines, then this claim could be assessed as false and a blatant lie. 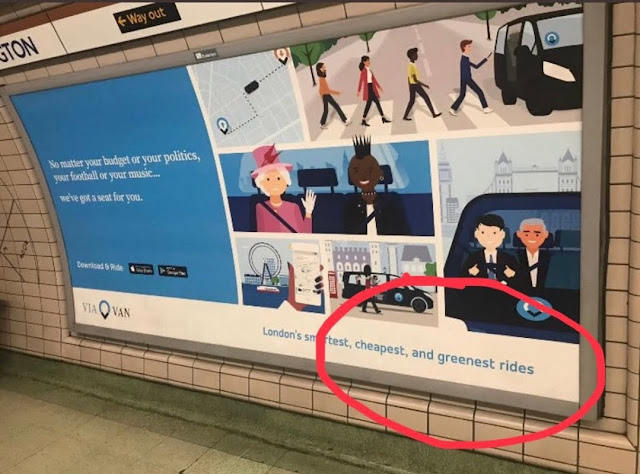 Stalling tactics from TfL not the first time.
A few years back Uber moved their operating centre from Old Marylebone Road, to new premises in Caledonian Street N1. When we checked, they were still registered with TfL in Old Marylebone Road. The Abstract of Law pertaining to PH says that if a company is found operating from unlicensed premises, then their licence will be automatically revoked and this would count against them being relicensed in future.
We complained to TfL and received a replying informing us that although Uber had failed to renew their address details with TfL, they had been given 8 weeks grace to update their address. We reported TFL's action to both the LTDA and Unite but neither representative body took action confirming our suspicions of an alleged 'not rocking the boat alliance' between these two orgs and TfL.
Posted by Editorial at 2:00 PM

It really sticks in my throat how a knowledgable London newspaper clearly and deliberately shares the blame of regular incompetance by Mini cabs with our Licensed Taxi Trade and the take over of this newspaper by Andrex is long overdue as it has a crappy editorial with no integrity.

What are our trade bodies doing? They should be reading this Blog to ensure that they are up to date in what is happening to our trade and tackle TFL instead of cosying up to them.