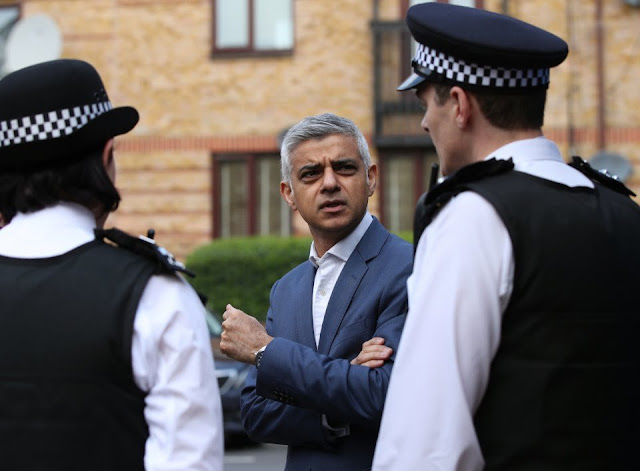 A South London police shop, replacing a Station that was closed to 'save money', in area hit by flurry of stabbings and shootings had cost taxpayers £690k despite hardly ever opening!
The 'COP shop' sited in one of London’s bloody knife crime frontline, has cost taxpayers £690,000, despite barely ever being open.
The 'front counter' base, similar to the one in Church Street Lisson grove that purports to replace the massive Paddington Green Plice Station, is just a simple desk inside a disused shop. These shops are meant to replace real police stations that have been axed and sold off in budget cuts.
Officials ar said to hav spent a vast £319,000 on just a refurb job in a bid to give people in Tulse Hill, South East London, the chance to chat to real local police officers and report crimes.
But, locals say it's “always shut”.... despite a host of stabbings and shootings nearby.
The rest of the total bill – which would have paid the wages of 23 new PCs – is made up of rent, running costs, rates and insurance.
The shock figures emerged after a freedom of information request filed by nation news paper, The Sun.
Despite its lack of use, papers show the Mayor’s Office for Policing and Crime (MOPAC) agreed to extend the shop’s lease in January 2017.
And it is not due to expire until September 2019 – meaning the total bill to September this year, is likely to top £700,000. And then the lease will have to be renewed, at another cost to the taxpayer.
One local shopkeeper, who did not want to be named, said: “I can’t remember the last time it was open".
‘FAILING TO KEEP PEOPLE SAFE’
“The shutters are always down.
“Everyone round here would prefer more police on the street, instead of this type of white elephant vanity project.
“Shops are for business, not for police to sit in.”
MOPAC first took out the lease on the shop in February 2007.
It has since spent £155,400 on rent, £130,600 on other costs and £85,000 on rates and insurance on the property.
The Met said it had “a view to exiting the lease in September 2019” but claimed it had “not permanently closed” the shop.
David Spencer, of the Centre for Crime Prevention, blasted: “As London finds itself stuck in a downward spiral of violent crime under Sadiq Khan’s mayorship, it absolutely beggars belief that police stations are being closed down, where people can access police services and get support quickly and easily.
“Even more staggering is the fact that they will still be coughing up huge sums in rent for an empty space while in neighbouring streets the capital’s knife crime epidemic continues to rage.
TAXI LEAKS EXTRA BIT:
It has been bought to our attention that even if you can find a police station still open, they are refusing to take in certain property found in the Taxi.
You are now expected to drive to drive the Baker Street, put your vehicle on the rest rank in Marylebone Road (if you can find a space) and walk around to the 'Lost Property Office' at 200 Baker Street. But, the Office is only open Monday to Friday 8:30 till 4pm.
Posted by Editorial at 1:36 PM

What has clouded our judgement is legal aid lawyers who have convinced the majority that it is not the criminals fault he offends but everyone else's responsibility to prevent the criminal from offending. The victim pays twice, the initial loss to the criminal plus through he's taxes foots the criminals legal aid bill. The other huge factor is not to punish the offender but rather to reform. I say, adequate punishment first, then after punishment perhaps reform depending on the crime. People like Soham killer Ian Huntley deserves only capital punishment. What's the point of wasting tax payers money on catching criminals and giving derisory sentences? We can never eliminate crime but it can be reduced by proper proportionate sentencing.

Lets not forget the previous mayors record, allowing uber in to London, giving west ham the olypic taxpayers stadium, building a white elephant ride across the thames losing money after money, spending millions on a white elephant bridge crossing , 40 million in fees, all taxpayers money, thats just for starters, khans a useless waste of space, but only copying boris bunter!