Love Them Or Hate Them, Passengers From Paddington Require Them... It’s That Simple 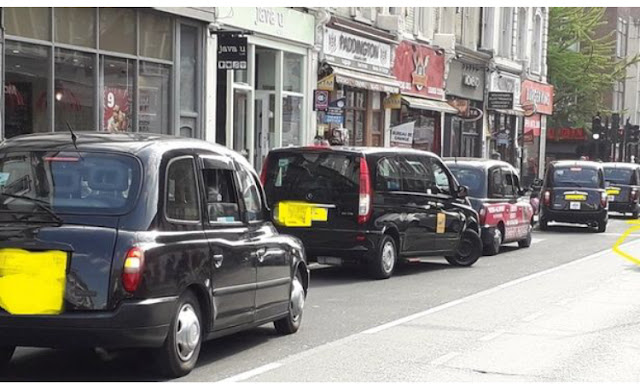 Above is the image used in an the article published on line by MyLondon.news.
It’s alleged to be a pop up rank that has caused hold ups not only to road users but also emergency services.
The photo they used was actually a line of Taxis, waiting at the traffic lights on the corner of Praed Street and London Street. (See second photo below) 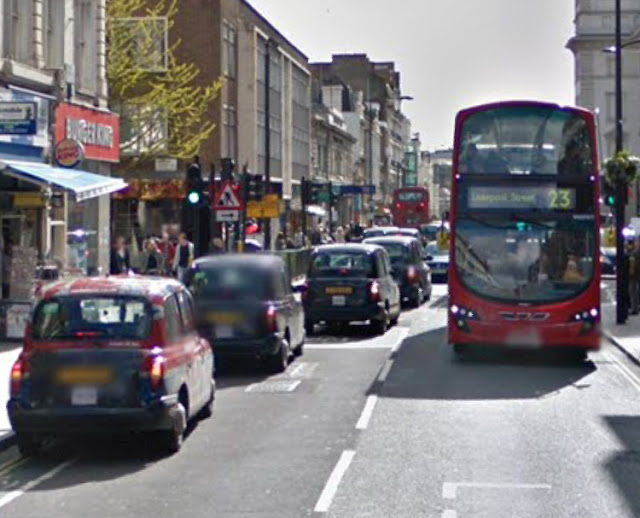 However, there is a pop up rank in the vicinity, but it’s actually in the other side of the road, outside the Hilton hotel. But the difference is, the pop up rank, isn’t causing an obstruction. This observation has been confirmed by the ambulance service who say they have no problem with the Taxis when accessing St Mary’s Hospital
Fake news reports in an online propaganda site ‘MyLondon.News’ say that Black Cabs are blocking Praed Street causing a problem with ambulances accessing St Mary’s Hospital. But funny enough when contacted for a statement...the ambulance service say they have reported no such problem.
The London Ambulance Service who we approached for a comment said no “significant issues” with congestion on Praed Street caused by Taxis ranking existed.
Has this online publication been fed these obvious lies by TfL in their ongoing anti Black Cab campaign?
The online article said: Two black cab drivers approached by the BBC Local Democracy Reporting Service on Tuesday (April 30) refused to comment on the issue.
Westminster Council's cabinet member for environment, Tim Mitchell, said: “Vehicles illegally blocking this section of Praed Street is unacceptable– that’s why we’ve stepped up the presence of our traffic marshals (follow the money) in the area to prevent parking offences including idling. We’re continuing to monitor the situation, and working with TfL and others to find a permanent solution. Well the best solution is for an authorised rank to meet the obvious demand from train passengers leaving the station.
There is no blocking of Praed Street this is a blatant lie from Westminster Council.
The article went on to say:
“As part of our ongoing Don’t Be Idle campaign, we’re educating all drivers on the effect of idling on air quality, (educating by way of a cash cow in tickets issued) but need Government to give councils greater powers to enforce against idling.“....
Will Westminster’s marshal be insisting that buses along Praed Street switch their engines off while picking up at various bus stops?
Will the buses be sudjected to penalty notices if found stationary with their diesel engines running?
Will Westminster City Council be insisting that all buses stopped in both Eastbourne and Westbourne Terrace switch their engines off, as they can often be found idling. (Yet funny enough, not a peep from residents or the council).
LTDA chairman Richard Massett said: “The LTDA does not condone drivers parking unsafely and causing congestion in Praed Street.
So why hasn’t Massett who is Chair if the Joint Ranks committee has a Taxi rank put outside the Hilton. There’s plenty of room and by the fact that cabs are using this pop up rank, there’s a definite need for a rank. Perhaps he is just going to initiate the alleged LTDA policy of wait and see if someone else solves the problem and then claim the kudos.
Before drivers formed the pop-up rank, there were lines of Private Hire touts, which can presently be seen actually blocking London Street... which is the actual access point for many ambulances.
The current situation highlights the inadequate design of taxi facilities at the station.
The policy of the LTDA working with TfL and Westminster City Council should be to establish a rank to serve both the hotel and Station south had years to sort out a solution, so far our regulator and representative orgs have failed.
The current thinking of all parties involved (including rank and file working Taxi drivers), is that any future authorised ranking facility, would best be sited in Praed Street at the site of the current pop up rank.
Below, is the real pop up rank. As you can see there is no obstruction. If there was no real call for this rank, with no passengers leaving by the south exit, then obviously, drivers wouldn’t wait there for a job !
Also, surely it’s better to have Taxis on a rank with engines switched off, than driving round aimlessly looking for passengers. After all, isn't that what the mayor and local councils clean air policies are sell about??? 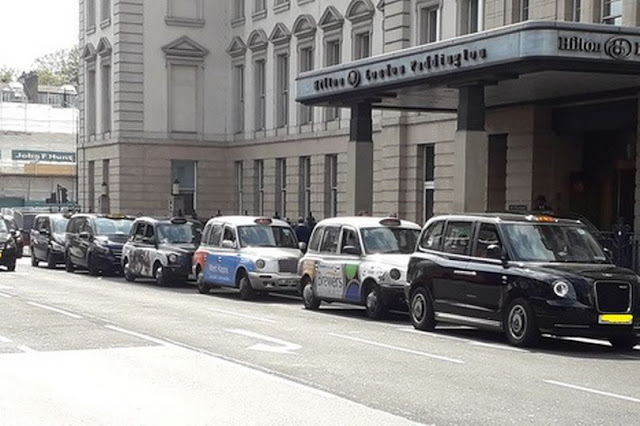 Let's get it right it's not a pop up rank it's an illegal rank stealing work from the official rank, so whenever I can I nick a job off them and piss myself at how they have the cheek to moan. If there were no taxis touting the customers would all go to the real rank or hal one off the street touts in disguise!!

A) The drivers are not touting, for From it, they are stopping PH touting.

B) Passengers have always left via the Praed Street exist.

Before licensed Taxis started to wait here, Private Hire touts picked off much of the traffic coming out. The pop up rank has stopped work being lost to PH touts.

Where there is a need, we have always eventually had ranks implemented. Nobu, Hakassan, Sketch, Arts Club, Novikov’s, the Shard and many more, all the result of driver led pop up ranks. All locations where the Joint Ranks Committee said ranks were impossible to gat and not needed or wanted, yet today are heavily used.

Re S Webb post: You may well be correct that this rank is considered illegal & you are doing nothing incorrect, by picking up in full view of it. However, I would like to make a few points: Firstly; I have no interest in this perceived ‘illegal’ rank whatsoever but I have used Paddington station as a passenger on occasions. Therefore, my observation is that the main rank, at the rear is not convenient for passengers (unless going north to Kilburn, etc) or drivers. The rank process there is slow & cumbersome to negotiate, for both parties - allied to the ridiculous length of time taken to exit at busy times - causing concern for driver & passenger. A great bit of planning - not! Secondly; drivers queuing to join this ‘official’ rank appear to cause much greater congestion there, than at any other station - aided & abetted by the traffic light sequencing, employed at the entrance/exit. Lastly, I cannot understand why it appears you take great pleasure by inflaming your fellow drivers, when you ‘nick a job off them’ adjacent to the ‘illegal’ rank? (Also, this could be deemed an oxymoron, as you surely can’t ‘nick’ something off of an ‘illegal’ situation & what you are doing is above board & correct. Although, why you would put yourself in a situation to aggravate work colleagues is a mystery.) The situation is thus; passengers have for time immemorial exited mainly via Praed Street & this is why the main ranks of times past were always positioned accordingly. The passengers will always continue to exit via Praed street & those who choose/use this route will not take the laborious route to the main rank but always look for a taxi in Praed Street. This is the problem; a rank planned & situated in a position by some half wit, without considering the needs of passengers or drivers - still what’s new. (And to S Webb, one last thought; unity is far better than divide & conquer - think about it.)

What pains me is that it's obvious to any one with an once of common sense to see that the powers to be (in this case the planners) do not employ comment or advice from the Taxi trade itself.

One only has to look at the mess that has been made at St Pancras, Euston, and especially Liverpool Street.

The Liver as its known to Taxi drivers, is a disaster, making the street a cul-de-sac was a massive mistake, yet the taxi orgs that are supposed to represent the best interests of the drivers, do nothing and just accept the situation as "a done deal".

Even when plans are released and drive realise there are problems the attitude of our largest org with 10,000 members is "let's wait and see".

Drivers shouldn't have to take matters into their own hand, they pay good money to these orgs to sort out problems, not sit back and do nothing.

All I can suggest is stop paying these orgs till they step up to the mark and start representing drivers best interests.

The taxi trade is seen as a nuisance by the public. Decades of bad publicity have drilled it into them, that we are greedy, rude, and unhelpful. Therefore any minor transgression needs maximum punishment at every turn.
The illegal rank on Praed Street, was not as prolific when the cabs ranked in the centre of Eastbourne terrace. The drivers on this illegal rank steal work, and slow down the official rank causing problems along the Harrow Road slip. Further annoying the public.
To the fella who said you can only access Kilburn and the North from the official rank. Just shows the believed ignorance that the trade is up against all the time. If a cabby says something his wrong, but a passing comment by a passenger, is taken as gospel.

Anon 5.42 AM: I would like to kindly ask, that before you start accusing people of ignorance (& taking the passing word of passengers) please read the comment again. It will then be understood, that the comment about the main rank, was NOT a ‘passing comment by a passenger’! Also, under no condition whatsoever, is the main rank in a good position - particularly, for those heading south. It is ill thought out, slow to exit & pales into insignificance, relating to former ranks at Paddington. It is incorrect to rank at Praed Street & it does, on occasions, cause problems & possibly, shouldn’t be encouraged. However, it cannot be deemed as slowing up the main rank or causing tailbacks in Harrow Road. This conclusion is due to my belief, that those using the ‘illegal’ rank, will not walk to or use the main rank. Instead, if the ‘illegal’ rank wasn’t there, they would just flag down a passing cab in Praed Street. This is most probably fact (& not hearsay) due to time factors/convenience.
In fact, I would challenge anyone to survey Paddington taxi users, who exit Praed Street, about this situation.

Therefore, please read all comments, etc, carefully & then respond to them. Otherwise - as in this case - your response, to this matter, can only be deemed as incorrect. (One other point; please note it is not; ‘his wrong’ but ‘is wrong’. I realise this is a bit pedantic but it is ignorance of spelling/grammar, etc)

All the very best & carry on reading - carefully!

Should have been ‘, he is wrong’, not ‘is wrong’
My comment about Kilburn and the north not being the only places convenient from the official paddington rank is true. The rest of my comment was my opinion on the situation, not a dissection of your comment. Please read the comments in full before ploughing in like an affronted English teacher on parents evening.