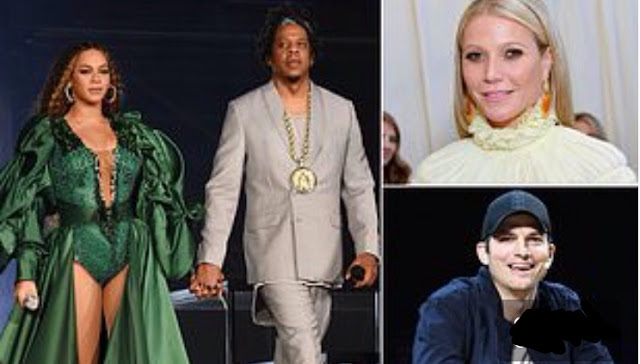 Publish today, a list of so called celebrities who will be profiting from Uber’s initial public offering, that could result in a significant boost to those who invested early.
Below is the list published today in the Daily Mail :
Considered to be the pioneer of smart-phone cab hailing and one of Silicone Valley's greatest success stories, Gwyneth Paltrow and Jay-Z were also early investors.
And while her husband has confirmed his investment in 2011, Beyoncé was reportedly later paid $6 million in restricted stock units for a concert for employees.
Olivia Munn also confirmed to Forbes that she had invested in the app. In January this year she admitted: 'I wish I’d invested more in Uber, but it’s hard to know when something will be successful.'
Actors Leonardo DiCaprio, Jared Leto and Edward Norton are all also said to have money tied to the company.
And drug cheat cyclist Lance Armstrong has even credited his shares with 'saving his family' after his admission that he used banned substances throughout his career.
He and Kutcher invested in billionaire and Chris Sacca's Lowercase Capital fund. Sacca was a friend of Uber cofounder Travis Kalanick and an early investor.
Armstrong is said to have invested $100,000 via Sacca and said his return was 'too good to be true'. Estimates say it made him about $20 million.
Kalanick's stock would be worth $5.3billion, while Camp's shares will be worth $3.7billion.
Huffington Post founder Arianna Huffington, an Uber board member, owns shares that will be worth about $1million.
Amazon founder Jeff Bezos and Shark Tank investor Chris Sacca also made large investments Uber early on and look set to make millions.
Uber drivers will also be offered bonuses with which to buy shares, with rewards capping out at $40,000 for those who have made more than 40,000 trips.
In 2018 the company’s revenue reached $11.3 billion, with losses of $1.8 billion reported. According to its IPO filing Uber has never actually turned a profit.
Recently the company has become embroiled in a pricing war with Lyft, with both of the hailing apps trying to attract and retain customers with low prices, while paying drivers enough to remain under their employ too.
The pricing war has led to thousands of Lyft and Uber drivers striking this week, who claim they’re given low wages and limited job protections as most are considered independent contractors.
Uber has now reached settlements with some of drivers who said they should have been classified as employees instead of independent contractors.
TAXI LEAKS EXTRA BIT:
Well, I will never feel guilty again about watching a pirate copy of any film containing actors on this list.
Also I will not be using any of the companies  mention either.
Let’s also remember the £500m investment from PayPal. Personally I have now closed my account with PayPal.
Again, I really don’t understand the attitude of the drivers who say, well they are cheap?????
Isn’t that what Uber customers tell us
Turkeys voting for Christmas comes to mind AGAIN.
Posted by Editorial at 2:11 PM

People seem to forget that Uber treats its employees like dirt and these celebrities are capitalising on slave labour. Very disappiinted to see the wolf of wall street living up to his stage name!

.....remember this when this bunch are at the democrat convention pontificating about equality whilst living off the backs of modern slaves.

Let's hope they all get their fingers burnt.

They will only get their fingers burnt when we get better organised and fight as 1.

the trade has never ever faced such a direct threat with the additional assistance of our licensing authority helping the agressors plan and invest whilst at the same time gain legal kick backs AKA private hire licencing fees.

If anyone googled the meaning of Insider trading and removed the stocks and shares element, TFL fits the description to a tee.

lets hope uber will cater for all the disabled and wheelchair bound punters when we,re gone,isn,t there supposed to be legislation pertaining to if you,re running a buisness you can,t descriminate against disabled people?.never forget we are providing a service,uber are running a BUISNESS.THE EU ELECTIONS ARE COMING UP,lets not forget what labour and conservatives have done to our trade,VOTE THE SLAGS OUT.