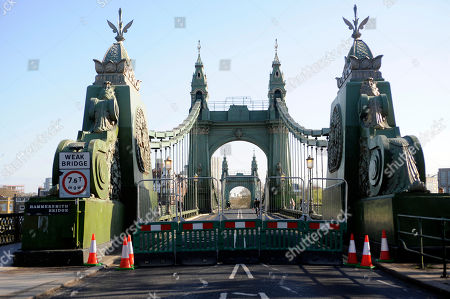 The cost of the essential work is going up and up while everyone is waiting.
The major Hammersmith Bridge refurbishment project has again been delayed, with the estimated cost of the work rising by £11 million.
The historic bridge was set to be closed for repairs by late 2018, but local leaders said the complexity of finalising the major engineering plans has set it back.
The work has closed the bridge, used by 20,000 vehicles a day for an unconfirmed period.
Figures provided to London Assembly transport committee chairman Caroline Pidgeon say TfL spent £546,000 by August 2018, on traffic wardens stationed at either side of the bridge to monitor weight restrictions.
City Hall officials also wrote that TfL said H&F had told the transport body work was unlikely to start before the autumn of 2019.
However, H&F says it did not know where that data came from, saying detailed planning was still under way, and the project is yet to be put out to tender.

"We don’t know why the Mayor’s office has given a start date of autumn 2019???
This is neither a date we recognise, nor one we’ve discussed with TfL," a spokesman said.

"There is no confirmed start date yet, but we will work with TfL to ensure residents are kept well informed, should there be any updates."
TfL added: "Hammersmith Bridge is owned and maintained by Hammersmith & Fulham Council and we continue to work with the council on their plans to repair it.

"We are talking to the council about timescales and the cost of the repairs so that these can be finalised over the coming months."

"This is a really strange situation that has been going on for some time and Hammersmith & Fulham is not being open about what's really going on," she said.

She added that if the problem was financing or complex works, H&F and TfL should provide more detail to the public.
H&F's spokesman rejected the suggestion of financial reasons for the delay, saying it was updating the public and other boroughs regularly via its website and in letters.

But Ms Pidgeon warned that TfL, already facing road maintenance budget cuts and the cost of Crossrail delays, needed to get the refurbishment under way before financial pressures worsened.
"TfL are having to pay with public money on the bridge for wardens when it should be paying for works to fix this situation," she said.
The Grade II listed bridge has survived the Blitz and a bombing but has been frequently closed for repairs, as its Victorian era engineering was not designed to bear modern traffic loads.
Interim repair works have been meticulous, tools must be custom-built and whenever one of the bridge's 999 decking panels needs replacing it takes six hours to do so.

Richmond Council transport lead Alexander Ehmann said the Liberal Democrat administration did not support the previous Conservative leaders' call for Richmond to take over the project.
However, Cllr Ehmann said Richmond wanted to plan its traffic management, and riverside residents and bridge users needed clarity too.
He added: "The bridge needs investment, and it needs strengthening works, and it needs a repair timeline. I would like to see that sooner rather than later."
Posted by Editorial at 2:33 PM

Forgotten where it is, its been so long since I had a job that way.

It does seem to be, that the financial cost of repair, is a bit of a sticking point in this case. However, if so much money hadn’t been squandered on another ‘pie in the sky’ bridge idea (further downstream) there would probably have been the finances to repair every bridge in London! Just saying🤔.

Bicycles only folks... one way or another they'll do their best to shaft the motorists, who knows, they may reopen as a toll bridge to recompensate tfl's floundering budget.

Dont get me started!

All the Barns solicitors and barristers will have the hump.

8:27 Anon
Perhaps they can start their own UTAG action group and can call it SABAH 👊🏻