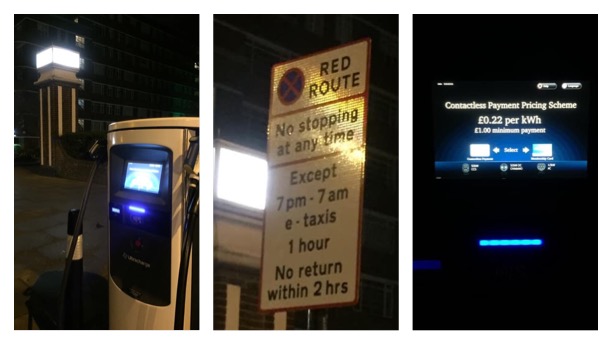 London Taxi driver finds out the hard way that all the TfL owned electric taxi charging points, are charging Taxi drivers a surcharge to use their machines.

In this case the driver was being forced to pay more than double.
The price using a RFID card should have been 09p per KWh but on the TfL owned black cab only charging point, he was being charged 22p, a surcharge of 13p per KWh.

I’m a driver of an Electric LEVC TXE

After doing my research on charging and fast charging I joined the chargemaster polar plus scheme  this gives me a RFID card to use up to 6500 different chargers at the reduced rate of £00.9 pence a KWh ..... this costs a monthly subscription of £7 which gives huge savings and makes it all a little more affordable

Tonight Iv pulled on to the charging point on Balham high road  connected the cab and swiped my polar membership card( as it says on the screen)for it to show card unrecognised ..... strange I tried it again

This unit is a TFL owned charging port .... it’s designed for black taxis only  and charged at 0.22 pence a kWh you can only use your debit or credit card as TFL receive a surcharge from the machine ... I have registered on the polar plus members network as a Taxi I explained .... chargemaster  informed me that this is TFLs stipulation on certain charging ports put in across London’s network

So not only are we forced to buy the electric cab , forced to take credit card at cost to us , we’re now being over charged for something we didn’t want ....... ludicrous
😡😡😡😡 why should we be charged over double to charge for £65k they should be helping us this is totally derogatory  to the trade and an insult !

Posted by Editorial at 2:04 PM

I seem to remember they were trying to sell the 67k taxi with the "it might be dearer than the 42k tx4, but think of all the money you will be saving on charging her up", seems the saving cost has gone out the window then! Good business for tfl though, good business means good bonus, win win! Someone has to lose , to pay the good bonus at tfl, and thats our job!

Why would anything surprise the cab trade anymore. None of the supposed diesel savings were ever going to reach the drivers pocket. Anyone who actually believed that must be crackers. What a life the future holds for the determined cabby. Most of your earnings, will be handed over in payments of many guises. So basically the trade, will be working for nothing. Who in their right mind wants to work 60+ hours a week and rising as normal. Have a long, serious think about getting yourself in stook, leasing a leccy cab (not many will have the bubble). If you’re getting a bit older, retire. If you still need, to work. Get a new skill. Tradesmen charge, enormous fees, for tiling, plastering, kitchen and bathroom fitting. And the people pay you loads with a smile. Not complain about the extra £2, caused by the traffic. Wake up everyone.

Well said 8.30, my thoughts exactly, we work like dogs and only way to make a living is doing hours and hours, only for people to cream it off, better getting a job doing anything without paying out again and again, everybody had their hand in your pocket, and as you said, people love chucking money at a tradesman , what other job do you have to pay 67k for to join ? Doctors? Dentists? lawyers? training fees maybe, but they earn 150k a year after, maybe more, we will still be doing 60 hours a week for peanuts!

Taxis are not allowed to use the polar plus rfid card as the terms and conditions specifically state no taxis. It's point number 5.

its a done deal

This has a direct impact on our trade as our competiors will be lining up to buy a 100% electric vehicle which has a range of 300 miles whilst our options are non existent.

The LEVC MUST Act now and explore continually technology which will eventually reach the above range levels needed for TAXI use (although Tesla will likely have a 1000 mile range by then for their cars) and more importantly TFL can see for themselves how Battery techonology has reached suitable levels for cars and light vans already so it is only fair to be proportional on expectations.

The TAXI trade needs for more time for technology to catch up and allow a smoother transfer between diesel taxis and the modern electic vehicles and it is simply unfair to allow a business of many years to be destroyed on competition of vehicle technology which is lacking.

The Euro 6 new taxi vehicle sales should never have been withdrawn in London which would have improved emissions on replacing older vehicles whilst atthe same time allowing LEVC to finance improving electric technology on their newer model and only goes to highlight how the disjointed thinking is clearly going on behind doors at TFL and this needs to end.

If TFL are really true to their word on cleaning up the emission levels in London, They should demonstrate this by creating an atmosphere of cooperation including involvement by "The buyers of vehicles" and not hostility as every single improved vehicle on the road is one better that its predecessor and that should be TFL's goal, unfortunatly and sadly for our trade and all air breathing Londoners this is not TFLs strategy.

I'm earning the same as 20 years ago & the Txe is 4x the price,it does not take with what's going on to work out the job is now unviable.

just wait until electric cars and taxis become electric,i,ll bet my left bollock you will only be able to charge them through official heavily taxed units,any one charging from their home supply will have their vehicle confiscated and a very heavy fine [just like if you,re caught using red diesel now,be lucky

Exactly 11.13, you will be only allowed to charge them at the tfl charging points, double the charge of the other charging points, or maybe treble, but its all in the name of safety, its not safe charging at home they might find, so doing us all a favour!

We have to get to that position first and the way TFL are salami slicing our taxis into oblivion we may not make it.

2.51 i,ve got a lot of mates working as labourers working 8-4 and earning more than me for less hours and less aggro,and they don,t have to include sat & sun in their working week either.