More Orange Lights Than A Christmas Tree, With The Sound Of Uber PingsRinging In Our Ears

It’s as easy as taking candy from a baby sharing the Uber App with any driver licensed or unlicensed.
Yes, I'm blowing the whistle on public safety.
Chris Johnson

If you're struggling to find a job tonight, struggling to meet your financial commitments and can't understand where all the work's gone...Then watch the video above 'pings, pings and more pings, and a nice bit of data breach'.

Same old rhetoric from the snowflakey ‘games not dead’ brigade and funny enough, they're right, London's far from dead, there is plenty of work out there.... Unfortunately it's standing in the street gazing at smart phones, waiting for their Uber Slave.

But this isn't about fair competition, this is all about predictor pricing and illegal plying for hire.
So, where’s our work gone... you may well ask!
Basically, it's in the Uber cars that are now openly plying for trade (illegally) all over London...but hold up a minute, isn’t that why we trained so hard, some of us for many years, so we as a trade would have the monopoly to legally 'Ply for Hire'?
Isn't this the reason we go through such rigorous background checks and drive such an expensive compliant vehicle???

Surely our largest representative org (the one with 10,000 members) would be on to this......surely they won't be waiting and seeing...again?

How did we get to this point???
In 2012, along came a multi-billion dollar company, registered in another country where they pay hardly any tax and no VAT, using drivers who acquired their licenses in a matter of days, with dodgy on-line medicals and questionable criminal record checks.... yet here they are openly plying for hire -in real time on phone screens- 13,000 we were told by a police chief inspector had fake DBS certificates and yet the general manager of our licensing regulator says she vouches for every one of their drivers.

After five years of rapes, sexual assaults, data breaches, customer account hacks, record numbers of RTAs...the regulator suddenly said 'sorry can’t relicense as you are not fit and proper' then ironically, they went to court and virtually defended the company (who incidentall paid TFL's legal costs even though TfL lost the appeal). The Magistrate, Emma Arbuthnot, then gave Uber a (non existent in current legislation) probationary licence. The smell from the courts reeked of conflicts of interest and corruption.
The company can now carry on regardless in much the same MO as before offering artificial low fares ( illegal predator pricing) which is a massive vote winner for Sadiq Khan...so we can’t expect any help from his direction.

So why have our regulator defended this company so vigorously???

TfL are set to make 30-million pounds a year from Private Hire Drivers...fact...so again, no help from that area either.

A bright lanyard, a new diary and the possibility of a few M&S vouchers, ain't gonna save your job!

It's time for all of the Orgs, Unions and drivers to dig into their pockets and throw their lot into the @UTAG17 campaign. No time left now for waiting and seeing.

TFL once told the trade, “if you don’t like it, take us to court” .....and that’s exactly what UTAG intend to do. 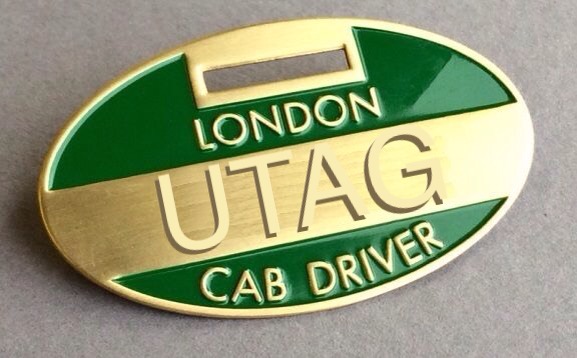 Posted by Editorial at 8:24 PM

And that is why I sold my unreliable, expensive to put right Tx4. I’m now renting, and can leave the trade at a moments notice. Work levels are terrible, and down on last year. Until Uber and their like are banned, the trade is doomed. The future of London was drawn up without the London cabby. I’m sure the suicide rate of drivers will rocket over the coming years, as they struggle to meet financial arrangements, ruining their mental health. A big thank you to all the Mayors and top level staff at TfL. Next year, a special offer for cab drivers. Brewery road is adding another month to the year, so they can squeeze in another payment.

Meanwhile, look at the characters making themselves busy at the remainer march, in London on Saturday and who was making a busy day of it. And just to think of all the highly important problems that need dealing with; but this character priorities something that should be way down the list. What a disgrace & shambles this once great city has become, due to such self righteous inadequates such as this example🙁!

A cab driver I know who chopped in his tx4 for a txe was working in his £65k 68 reg cab yesterday when he noticed his rear wiper randomly flicking up now & again, a couple of hours later neiher his front or rear lights worked.

Saturday night lost, Sunday off the road, Monday in LEVC for as long as it takes to repair, ....

he may not have lost much in takings simply because they are sporadic but he will still have to pay the taxi cost, insurance, roadtax etc,

We all must all reply to the age limit consultation and voice our condemnation to what will be the final nail in our coffins, as we are at least 5 years away from a suitable replacement of the diesel engine taxi and this time is miniscule for planet london and should not be rushed to pacify the green wellie brigade at our destruction.

And we still got drivers refusing credit cards and putting cash only stickers in cab. And have never been to a demo or belonged to any union

Our largest org should be banging on the Mayor's door demanding that euro6 Vitos be reintroduced untill there are suitable replacements...but they won't do that because like Emma Arbuthnot, they have a family conflict of financial interest.

The Mator has OK Vitos for VisVan and if pressed and threatened with court action, would allow for Taxi trade.
But our largest org, won't even concider asking!

Still think it's worth a lanyard, diary and a possible M&S voucher....cause let's face it, that's all you get for your money now!

And we wonder why no one is doing the Knolwedge HERE IS YOUR ANSWER TfL have fucked us over the Knolwedge is finished and I believe an announcement will be made within the next few weeks to scrap it KARN. Knew more than he let on trust me anyone with a new cab good luck as you need it

We demo for access to bus lanes but have not had a demo about uber plying for hire what is the point of spending 3plus years doing the Knolwedge being tested by examiners to be called point that no. Longer excisted calling a run by the line and an examiner redline you coz it’s not what that wanted I’m sorry Jim but it’s just a total joke

Anon 7:22
Simple, our largest orgs General Secretary's son was working for one of the suppliers and aw SMc said, it was a done deal
What he didn't explain was it was us who got done

To be honest we keep moaning about ORGS not backing us but it’s complete bo&&&& WE are to blame if it wasn’t for us subscribers to this shower of sh&& they would exist?? And what do we get in return, a complete numpty on a 6 figure sum and offers of M&S vouchers and a diary!!! Who’s really to blame?? We need to look in the mirror if we want to save this trade.