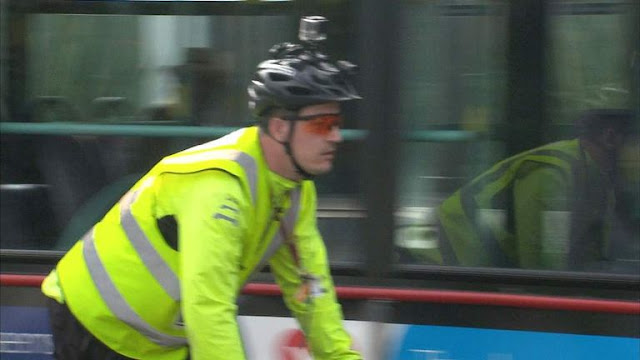 Good news today for another Cabby, again unfairly harassed over touching a mobile phone while being in control of a licensed Taxi (this time with engine running and waiting at a set of traffic lights with hand brake on).
I was approached last night by a driver who doesn't want to give his name, who told me that he had to go to court, as while he was stationary at a set of traffic lights, a passing cyclist with a helmet camera had made a digital recording of the driver holding a mobile phone.
The cyclist passed the footage on to the police and a summon's was duly issued. The drivers refused a fixed penalty and opted to go to court.
In court he gave evidence that the passenger had found a phone on the back seat and asked the driver to take it into the front. The driver said he told the passenger to hold onto the phone (as they were moving at this time) until he was stationary and could put the hand brake on.
The driver also produced a recite from his local police station where he had handed in the property. Dates of the alleged offence and the police recite matched.
The court found that the driver had acted responsibly, that no offence had indeed taken place and the charge was dismissed. The driver has also been awarded costs.
TAXI LEAKS EXTRA BIT :
Don't panic, loads of social media users thought they had been thrown off platforms such as Facebook and Instagram. Many couldn't sign in and this already signed in couldn't make posts or post comments within groups.
Facebook sent out an email this morning explaining that they had isolated a bug in the system and that everything should be up and running properly today.
Posted by Editorial at 2:33 PM

They have to temporarily shut down facebook to allow the Amercan Secret Service to harvest your internet fingerprint. They should te name it Mugbook!

What a knob that’ cyclists is all that’s going on in the word and he’s going about his day as being a super grass GET A LIFE!

When are cyclists going to have to pay insurance? Having thousands upon thousands of cyclists riding around our city, with lethal weapons, at speed, surely in this day and age every cyclist should have to be insured, and cycles have a yearly or 6 monthly cycle mot, this should be included in any org demands! Im a keen cyclist and would welcome the new law , as it would make the roads safer for us all, motorists, cyclists and the general public, to many people have been killed by cyclists in london over the years, some just ride away, like the red light /crossing brigade, this HAS TO STOP!