Week 2 Day 2 : Thank You TfL For Making Our Demo Successful . Every Journey In Tatters! 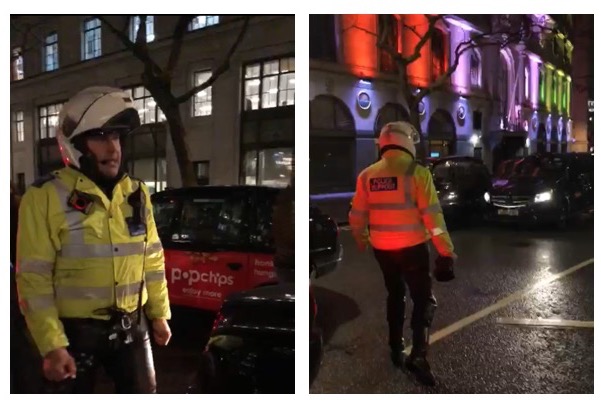 Seventh weekday evening in a row and bang on the dot of 4pm, the proactive drivers of the ITA again blocked Tottenham Court Road (TCR). But today we noticed a complete attitude change from the police.
Someone above decided they would give Taxis the run-around, and road blocks were set up to stop drivers accessing the road from side streets. The only access point being from Charing Cross Road. Drivers were told by the police at road blocks, to head for Oxford Street... but many found the police at TCR were unwilling to let them enter from Oxford street east bound. Shortly after 4pm Taxis traveling east along Oxford Street or trying to turn left from Rathbone Place, were diverted through the no entries into Soho Square, to make their way down to Old Compton left onto Charing Cross. A few Cabs were given access approaching westbound along New Oxford Street.
To stop the cabs heading up to Kings Cross again, at 5 pm TCR had been blocked across the top, cabs were diverted into University Street and then into Gower.
Unknown to the Police or TfL (who, we've now been inform have taken to directing police action at the protest) today's secondary target was always going to be the Aldwych.  So it turned out, that when the shout went out, to head for our secondary venue, Palestra's Centre Coms did most of the job for us, making passage down towards Kingsway a doddle.
To make matters worse -or in our case better- TfL decided to stack buses on Waterloo Bridge causing a complete shut down, and along the middle lane on the Strand side of Aldwych, making the through route impassable. 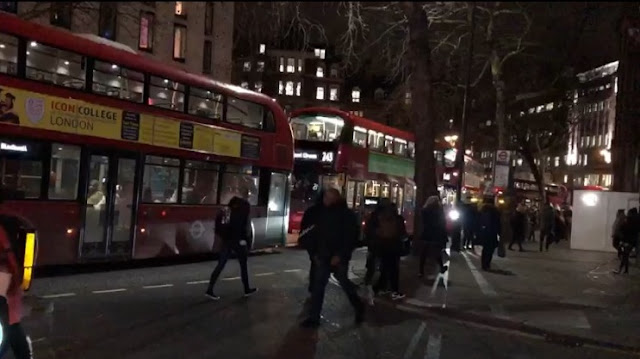 Job done in minutes, the whole place became a car park and the more the police (under TfL command) tried to fiddle with the traffic, it just got worse. 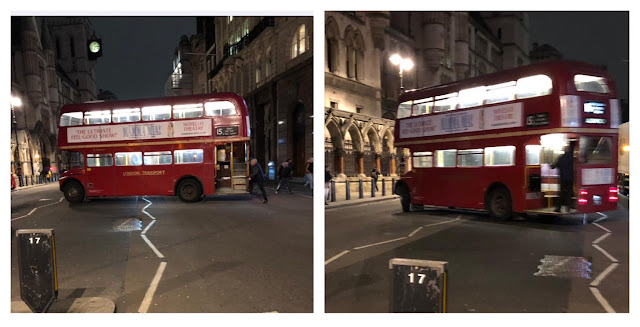 This bus decided to do a U-turn outside Law Courts. After half a dozen backwards and forwards manoeuvers, it finally departed in the opposite direction.
TAXI LEAKS EXTRA BIT :
Totally Failing London. Every journey in tatters!
We had an idea that TfL had become involved yesterday (Monday), as when the main body of drivers tried to leave TCR for the Cross, the lights at the top by Euston Road had been re-phased to just a few seconds on green. This action caused massive problems with private traffic (who had been allowed to enter the free lane by police), which blocked the emergence access. Not only that but at the Cross, TfL buses were being escorted by police motorcycles along the wrong side of Pancras road, out of the chaos.

Then today (Tuesday), talking to a motorcycle cop, we asked why access via the side streets had been restricted.... he said "orders from TfL ... So, we'd like to thank whoever was running the show for TfL at Palestra Centre Coms, for helping us get to our secondary target in just a few minutes.
The Police Wrong Footed :
When the whistle blew at five, the Met motorbikes flew up to the Cross en masse with blues and twos flashing away. Few red faces there then.
With more drivers joining in day after day, this has been our most successful protest so far, in-spite of the fact TfL tried to pin us down and keep us out.
Keep it up people and remember:
WHERE BUSES GO, TAXIS GO...
Posted by Editorial at 11:55 AM

Listening to LBC on Monday I heard the travel woman state the "mini-cab" protest was taking place, which I thought was odd. The next report half hour later she actually stated "mini-cab" and "taxi" in the same sentence!

Good to see the police used to good effect.
When your children are being robbed and stabbed in broad daylight or you are ripped off whilst doing your job (by violent thugs) there are somehow no officers 'available'.
Come on Khan, make sure you charge us all more in our council tax for police, yet give us less protection (sarc).