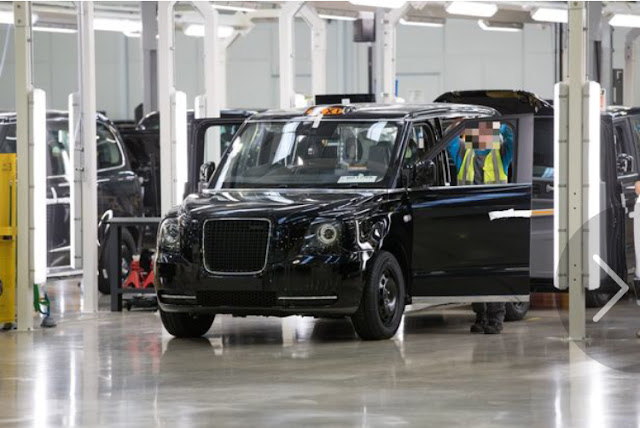 Shock news today as we read in the Coventry Telegraph, that Coventry based Electric Taxi manufacturer announces 70 job losses.

Workers at the LEVC works, that builds the London Electric range extender black cabs, have been told today to expect job losses.

Managers called their production staff together this afternoon and inform them of plans to reduce the workforce by 70. This is around a fifth of the total workforce.

According to the Telegraph, a production worker (who did not wish to be named) said: "We all knew this was coming, but we didn't know the amount.

"There will be another meeting tomorrow where we will find out the criteria - which staff are going.

"We knew that this would be announced as soon as Prince Charles had left.

"We have put our heart and soul into that new building for Coventry, to do Coventry proud again.

"There are some brilliant workers there, the management are not fit to run a factory in Coventry.

"The production manager called us all together today and said there were 70 to go.

"They are looking at five weeks until we don't have a job.

"Because it is a new company, 80 per cent of the workers are new.

"The workers from Holyhead Road can carry their service on, but it will all be new workers that go.

"Our prospects are bleak now in Coventry."

A spokesman for the London Electric Vehicle Company said: "2019 will be a challenging year for UK automotive.

"To prepare the business we are reducing the number of agency staff and making productivity improvements.

"We still expect demand for our premium electric taxi to continue to grow over the coming years."

It is thought amongst the trade that the vehicle has been over priced and the number of sales expected have not materialised.

There are fears amongst the London Taxi Trade LEVC owners, that the company could fail leaving drivers who’ve purchased the vehicle with a very expensive white elephant

On the electric Taxi front, there has been news the the Nissan Dynano Fully Electric Taxi could be hitting the dealerships in early Spring.

The Dynamo retails (with subsidies) at a whopping £20,000 less than the LEVC.

Obviously relying on a big order from the royal household. When the enquired on the price, even they gave it a miss.

May one inquire just how much these vehicles cost ?

Daddy won’t be getting one for his birthday what !!!

15 year age limits on an electric cab that costs £60k and not a drop of diesel in sight!

little wonder sales will dry up... who is running the TFL asylum?

2019 will be a challenging year for UK automotive

This is nothing to do with Brexit or the automotive industry,this is 67k for a Taxi with once you've bought it to be told you can't drive it through Bank junction,& by the way the list is going to get longer,Tfl thought we would be gone by now so along with Camden they are turning the screw.

I think we are unless things change seeing the end of the purpose built taxi,with the app lot looking like they've come to the rescue with just cars,then watch Tfl re write history with there version of the demise of the London taxi.

far too expensive, they can't sell them and turn a profit, plus they can't build them at the necessary volumes.
indeed a white elephant

by the way, interestingly did anyone ever mention that the replacement battery is circa £23k, required sometime after 5 years??

As a former employee , the management certainly do not live in the real world, backstabbing , golden handshakes , jobs for the boys , new cab is nice but not worth the money !!!

You only save a ton on fuel during the weeks you’re not working. Which for most drivers, will be 2 weeks per year. Cause the payment plan never stops. Where do I sign up!!!!

£65,000 havin a laugh, how much do they think cabbies are earning, wake up and stop dreaming excessively inflated price for a industry on its knees

The numbers never stacked up on this from the begining.

Firstly high price in relation to earnings, secondly you could rasonably calculate lifetime cost over 15 years for tx4 as it was a known quantity regards reliability who knows what will happen with a TXE.

Not convinced about fuel savings £100 equates to circa 370 miles of diesel so really depends on the miles you do per week plus type of driving and Glasgow is different working place to London.

Do not want to rain on anyones parade but question would have to be asked why Nissan themselves have not brought electric cab to the table after all the time and effort spent on petrol version only to walk away very quickly. At cost suggested cannot see Dynamo selling enough to make it viable.

Remember LEVC owned by Volvo so they can afford to sweat it out, once TFL have decimated licenced cab trade as we know it this could become designated vehicle for new app based operators/franchisees.

Electric Cab was developed to give a good jobs to the white collars at LEVC, and not to fill the gap in the market...