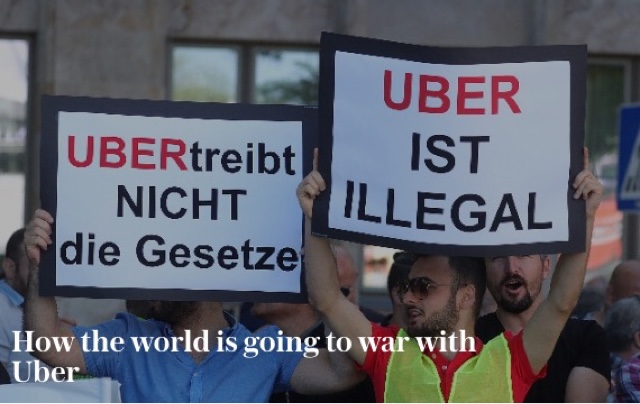 Ride-hailing service Uber lost an appeal in France brought by a former driver who wanted to be recognised as a full employee.

The ruling on Thursday overturns one from last year when a French court decided in favour of Uber, saying its drivers could refuse customers if they wanted to and were not told how many hours to work by the firm.

The ruling was hailed as a "landmark decision" by the plaintiff's attorney, Fabien Masson, and follows a similar court decision last month in Britain that Uber should give its drivers workers' rights, including the national minimum wage and holiday time.

The former driver sued the company in June 2017, two months after Uber had deactivated his account, to have his "commercial accord" re-evaluated as an employment contract.

He was seeking reimbursement for holidays and expenses as well as contract termination and "undeclared work" indemnities.

The Paris court determined the contract between Uber and the former driver was "an employment contract" on the basis of the driver being dependent on the ride-hailing service for work.

Thereby, the court ruled that Uber had "control" over the driver.

In response to the ruling, Uber announced today that it will reappeal the ruling in La Cour De Cassation, France's highest appeal court.

A Uber spokeswoman said that the reappeal was to "preserve flexibility" where "drivers can decide to connect in real time and without any requirement of exclusivity."

"Drivers choose to use the Uber application for the freedom to connect to it when they want" she added.

Uber has long maintained it is simply a service provider, connecting people needing a ride with drivers - either amateurs or professionals, depending on the country - in about 630 cities worldwide.

The company has argued that it is just a service provider that people can use to request rides from drivers listed on its service.

The European Court of Justice views the ride-hailing service as a transportation service, for which the same regulations on traditional taxis and other ride providers also apply.

Posted by Editorial at 8:56 PM

This time was always going to come, it will be interesting to see if the uber philosophy in throwing money to high influential or top legal people will do the trick as was done in the past?