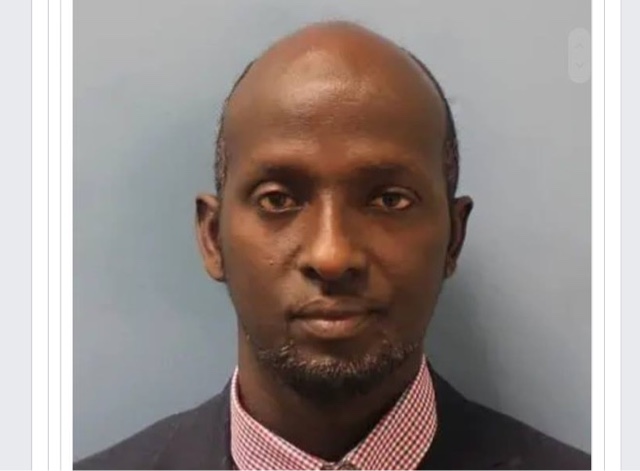 A "predatory" private hire driver from Brent has been jailed for two years over a series of sexual assaults on lone women in his car.

Hire Mire, 51, was convicted of three counts of sexual assault by touching at Wood Green Crown Court. The assaults took place in Hackney, Buckinhamshire and Surrey in September 2017.

In a previous trial in April this year the man – who lives in The Mall, Kingsbury – was convicted of public order offences in after making two separate women feel vulnerable and intimidated in his cab.

Siwan Hayward, TfL’s policing chief, said: "I commend the passengers for coming forward and reporting the series of predatory incidents, and working with the Police to secure this conviction.

"We take all allegations against licensed taxi and private hire drivers extremely seriously."

Mire has also been placed on the sexual offenders register for 10 years and banned from being a private hire or taxi driver.

Wonder which private hire operator allows its drivers to work outside its London licensing area ?

Surely prevention is better than detection Siwan....we did try to warn you....with Helen Chapman sweeping 13,000 fake criminal record DBS certificates under the carpet, there was bound to be an increase in private hire sexual assaults (and rape) cases.

But you didn't listen Siwan, instead TfL have done all they can to cover up and protect these sexual predators. 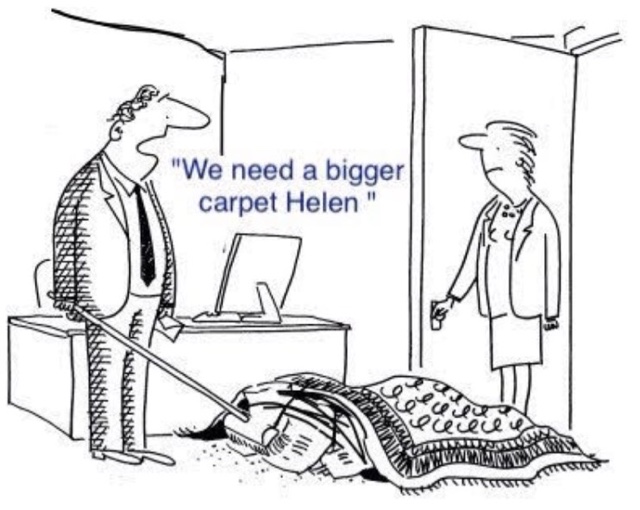 Is TfL's House Of Cards About To Come Tumbling Down, As ITA Announce Consecutive Protests ? 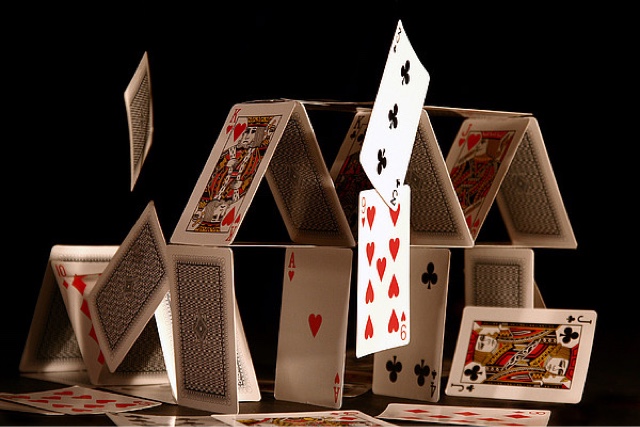 In 2009 former banker Ajit Chambers presented then TfL Chairman Boris Johnson with a plan to make £200 million by opening London’s London disused tube stations as ‘Tourist Adventures and ‘Multipurpose Venues’.  Mr Chambers then worked closely with Boris and two Transport for London staff.
Transport for London ran a procurement process in 2015 for the stations after the UK press reported in 2014 that the project was worth £3 billion. 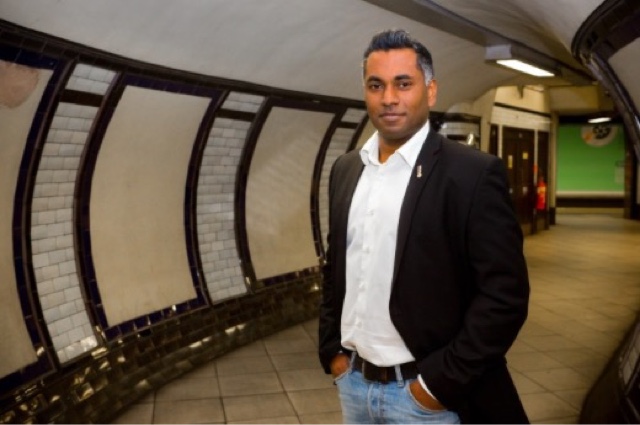 Mr Chambers extremely lucrative project was then not awarded to any of the bidders and instead Transport for London used their own subsidiary London Transport Museum.
Read full article here: https://wirenews.org/news/london-entrepreneurs-serves-transport-for-london-with-pre-action-protocol-bundle-in-200-million-damages-claim/
This is the type of underhanded (some might even allege corrupt) behaviour, our licensing authority appears to excels at.
A cabby on FaceBook has posted, that a London MP he picked advised him:
"TfL have no intention of getting London's traffic moving again, the current congestion is contrived at the highest level within TfL and share holders of a certain construction maintenance company appear to be making a killing."
He went on to say: Top officers in TfL should be investigated to see if they have any financial conflict of interest in this gridlock madness."
Road access is systematically being withdrawn from the Taxi trade even though there has been no change the London Cab Order 1934 para 34:
A taxi driver is under a duty to drive the hirer of his taxi to any place within the Metropolitan Police District or the City of London not exceeding 12 miles from the place where he was hired.
The consultation for the Tooley Street's Bus/Cycle only access, was set to be released in the new year, but fearing mass cabby protests, it was decided to release the consultation just before Christmas, in the mistaken belief that the trade would not react and just carry on working regardless.
The proposal (following on from the restrictions at Bank Junction, Moor Lane and a number of streets in Hackney) is just the thin end of wedge, with many other areas already ticked off for implementation in the new year.
We've also heard that Euston Road is scheduled to be closed to traffic for a number of months.... for a massive rebuilding program. 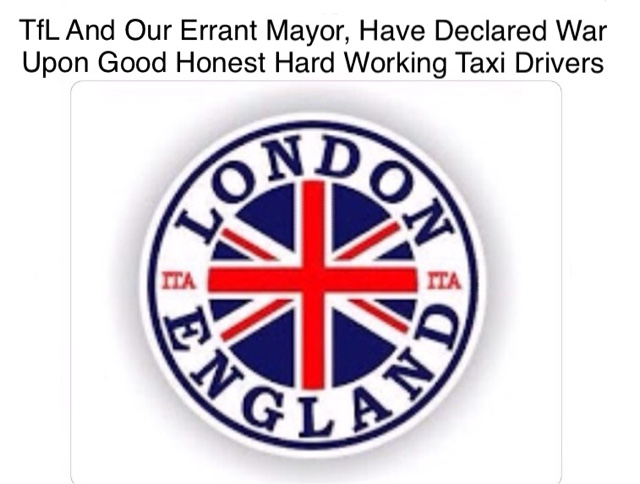 The Independent Taxi Alliance (ITA) has made the statement, "Enough's enough" and have scheduled a series of demonstrations which will start on November the 26th 4pm on London Bridge with other targets (to be announced) continuing on consecutive workdays (Monday-Friday).
Objective:
•  TfL consider London’s Hackney cabs as part of London’s Transport network.
•  Everywhere buses go, we go.
The protests will continue till the job is done and that is:
No more let's wait and see nonsense.

Also, don't forget, UTAG will also be going after certain TfL senior officers past and present. 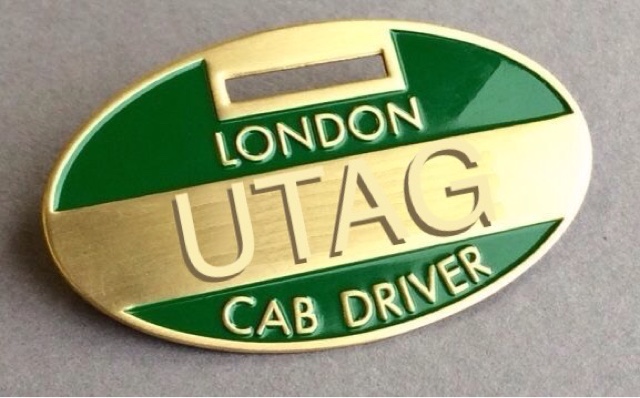 Support UTAG, sign up here:
https://www.unitedtradeactiongroup.com/
The UCG have also announced they will no longer be consulting with TfL under the umbrella of the engagement policy. Two other orgs are to consult their members, with a view of joining the United Cabbies Group. 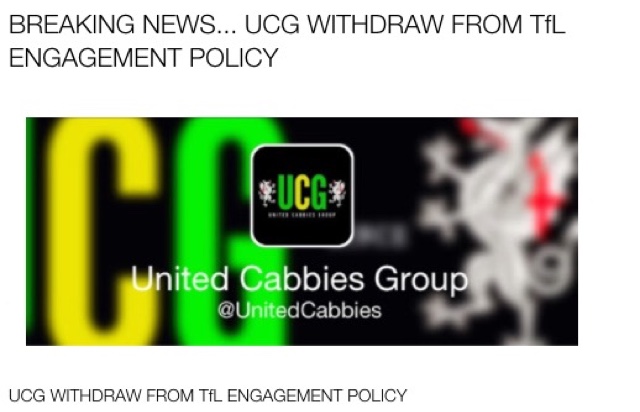 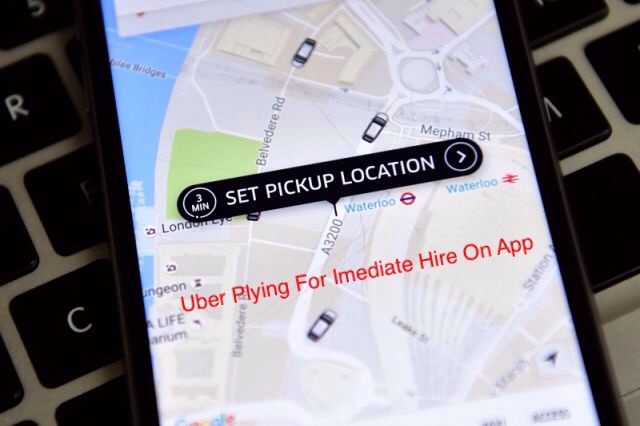 Uber Technologies Inc said on Wednesday that growth in bookings for its ride-hailing and delivery services rose 6 percent in the latest quarter, the third quarter in a row that growth has remained in the single digits after double-digit growth for all of last year.
The San Francisco-based firm lost $1.07 billion for the three months ending Sept. 30, a 20 percent increase from the previous quarter but down 27 percent from a year ago, when the company posted its biggest publicly reported quarterly loss on the heels of the departure of Uber co-founder and former Chief Executive Travis Kalanick.
Uber is seeking to expand in freight hauling, food delivery and electric bikes and scooters as growth in its now decade-old ride-hailing business dwindles. The company, valued at $76 billion, faces pressure to show it can still grow enough to become profitable and satisfy investors in an initial public offering planned for some time next year.
Its adjusted loss before interest, taxes, depreciation and amortization was $592 million, down from $614 million last quarter and $1.02 billion a year ago.
"We had another strong quarter for a business of our size and global scope," said Nelson Chai, Uber's chief financial officer, who joined in September after the job had been vacant for three years. He emphasized the "high-potential markets in India and the Middle East where we continue to solidify our leadership position."
But broader economic conditions and sustained losses could push Uber to merge with rivals in India and the Middle East, particularly as Uber and India-based Ola share an investor in SoftBank Group Corp (9984.T).
Uber's gross bookings were $12.7 billion, up 6 percent from the previous quarter and up 41 percent from a year ago. In late 2016, Uber's quarterly bookings growth approached 30 percent, and in early 2017 it still sustained double-digit growth quarter-over-quarter. At the start of this year, however, bookings growth slid into the single digits.
Revenue for the quarter was $2.95 billion, a 5 percent boost from the previous quarter and up 38 percent from a year ago. That trailed the second-quarter year-over-year revenue increase of 63 percent.
As a private company, Uber is not required to publicly disclose financials, but last year started releasing selected figures.
Since CEO Dara Khosrowshahi took the helm more than a year ago, Uber has retreated from foreign markets where it had suffered heavy losses and shuttered certain pricey ventures including self-driving trucks. But Khosrowshahi has plowed the savings back into its freight-hauling, food-delivery, and electric scooter and bikes businesses.
An investment by SoftBank that closed in January, which gave the Japanese investor a 15 percent stake in Uber, included a provision that requires Uber to file for an IPO by Sept. 30th of next year, or the company risks allowing restrictions on shareholder stock transfers to expire. That could create a mess for Uber's ownership structure and equity value, and pose regulatory problems.
Uber is considering moving its public debut up from the second half of 2019 to the first half, given concerns about a market downturn and an expected IPO from its chief U.S. rival, Lyft Inc, according to sources familiar with the matter.
Khosrowshahi has focused on growing Uber Eats, which took in $2.1 billion in booking revenue, marking a 150 percent jump over last year and about 17 percent of total bookings.
Uber has also pledged to double its investment over the next year in Freight, a brokerage service set up in May 2017 for truck drivers and fleet managers looking for cargo to haul. The business is doubling the number of loads it connects with truckers every quarter, Uber said.
But it is not yet clear whether either business can sustain a profit. It is also unclear how Uber will fare in a shakeout of the crowded global food-delivery industry, and whether its freight business will be widely adopted by fleet managers.
Source : Reuters
Posted by Editorial at 4:05 AM No comments:

Enough Is Enough, As TfL Declare War On Road Access For Taxis 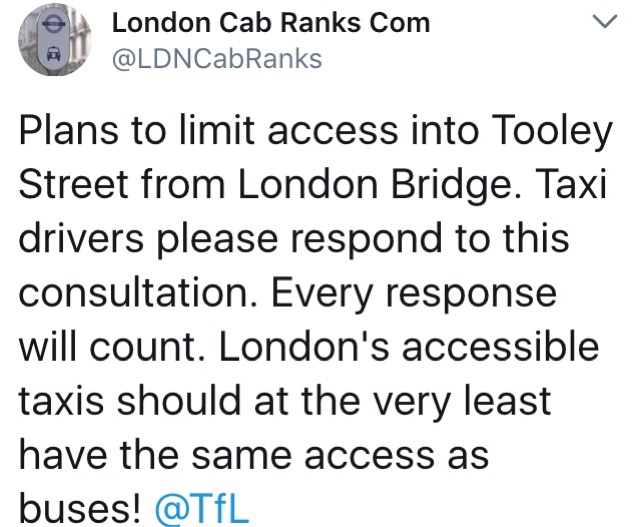 We’ve been informed today that TfL want Taxis banned from .
We’ve been told that TfL want access for  transport buses and cycles only.
The word has put out on social media in the form of a consultation contained in a tweet from the joint ranks committee….but as we know these consultations are meaningless. No matter what the result of the consultation, TfL does exactly what they want. We saw this with  where they refused to take residents opinions into consideration. Westminster City Council had to intervene to stop the pedestrianisation going ahead.
This is the thin end of the wedge and we cant let this happen.
We’ve already seen Taxis banned from a number of locations in and around the city. But this new proposal is the start of a definite push against road access for ’s Taxis.

Grant Davis, chairman of the London Taxi Drivers Club has gone on Periscope today calling for direct action and will be posting details in the very near future.
Grant said today “we have no friends at TfL, everyone there is offside and if we don’t wake up,  we will be offside for good….If these plans are implemented we will be no more meaningful to London’s transport network than mini cabs except we will be expected to be driving around in a £65,000 vehicle.” 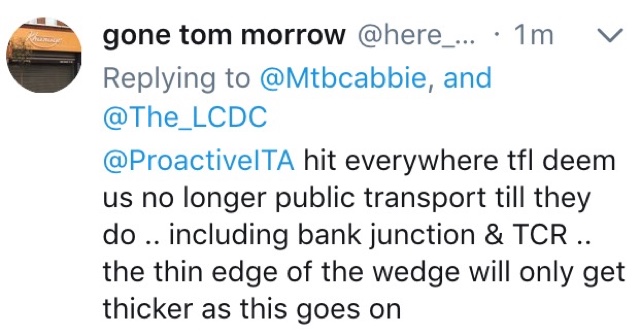 “We can’t stand for this, we have to take action. Please keep an eye out on social media as we will soon be posting details for a series of mass ply for hires.”
Watch LCDC Chairman Grant Davis on Periscope
Click link below
https://www.pscp.tv/w/brw-7jE2MDc2Mjh8MVlxeG9yTXB3cVpKdqVbDPS4FGZIVpfjyocJ3kW-Y1VN8JKGIMmexIleKNw1
TAXI LEAKS EXTRA BIT :
What will our largest org do about this???
Will they be calling mass demos to support the drivers who pay their wages???
Our guess is they will issue a statement saying "let's wait and see".
After all we can't have Mike Brown upset, can we.....
Also can't wIt to see the tweets and social media comments from all their mushrooms who are kept in. The dark......
"It's the wrong time"
"It's the wrong day"
"It's the wrong place"
"Demos don't work"
Just remember my post from last year (now updated) which finished....
First they licensed Uber, and I did not speak out—
Because I was working.
Then the Trade Unionists and Taxi orgs called a mass demo, and I did not go—
Because it was busy and I had to work.
Then, after realising our largest org was doing nothing, 17 drivers stood up shouting and rebellious...but they were expelled—I did and said nothing, just carried on working.
Then they asked for members to go to a branch meeting to vote against Judas and his WAGs — but I didn't go as I was working
Then they suspended the elections and scrapped the branch....
But it was busy and I didn't say anything.
When they finally took my Badge and Bill and handed it to an Uber driver— there was no one left to fight for me. 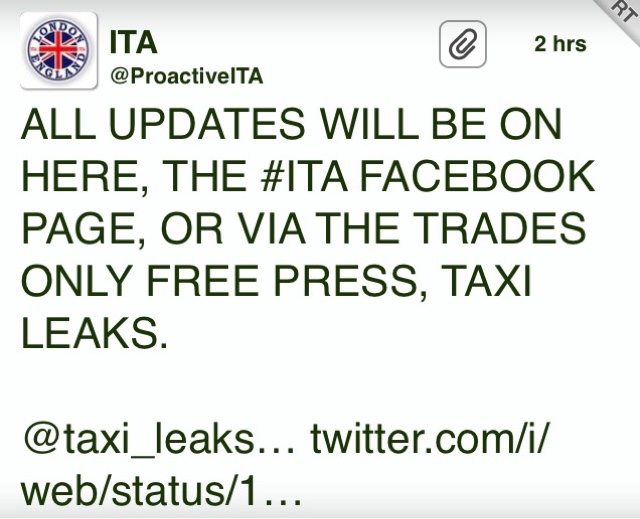 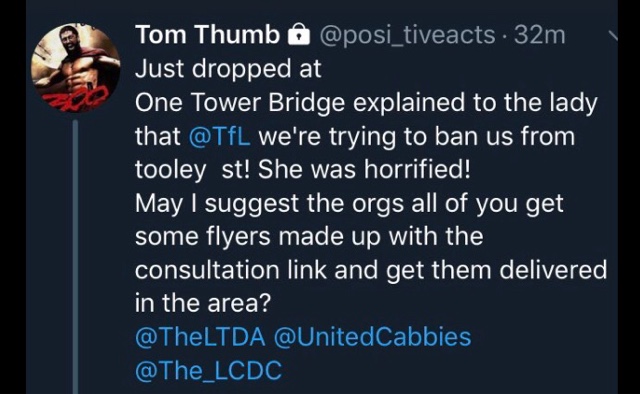 Posted by Editorial at 4:42 PM No comments: