The first day of action in this first series of five, got off to a great start being well attended, better than expected. 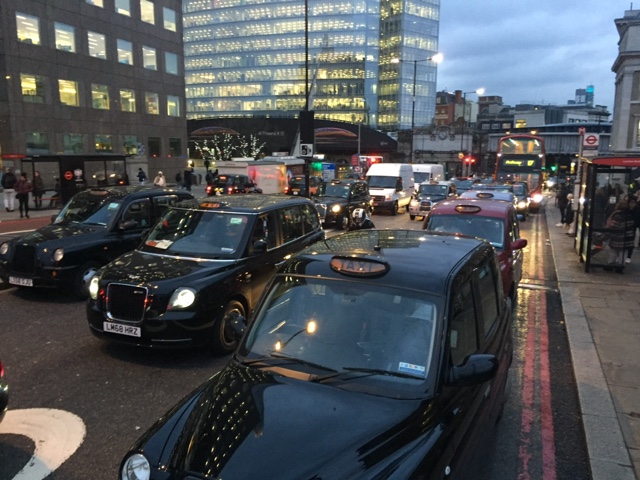 The protest kicked off on the stroke of 4pm. The bridge, which comes under the City of London Police (who were great, and seemed very supportive) quickly filled up and the whole area came to a complete halt.
The irony of the situation was exposed when the CoL decided to open up access to all vehicles at the bank Junction, to try and ease traffic flow which was gridlocked. 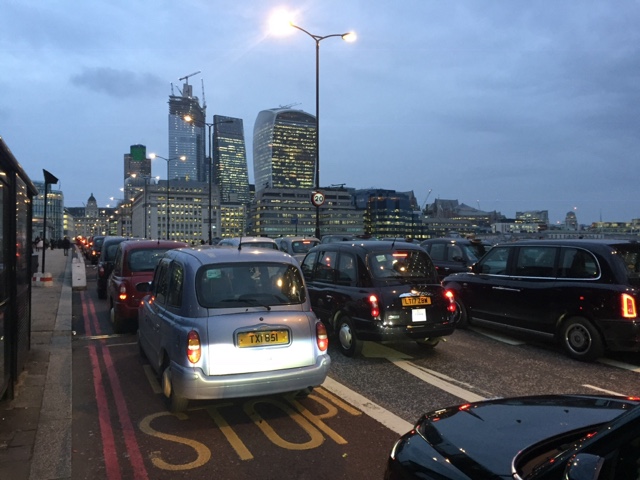 The CoL police inspector who appeared to be in charge, amazingly, said they had been caught by surprise as TfL told them the protest had been cancelled.
There was a short sharp interaction with two Met motorcycle police officers, who for some reason became aggressive and were threatening to arrest drivers for obstruction. But the CoL inspector ordered the two to carry on riding and leave the situation to the City police. 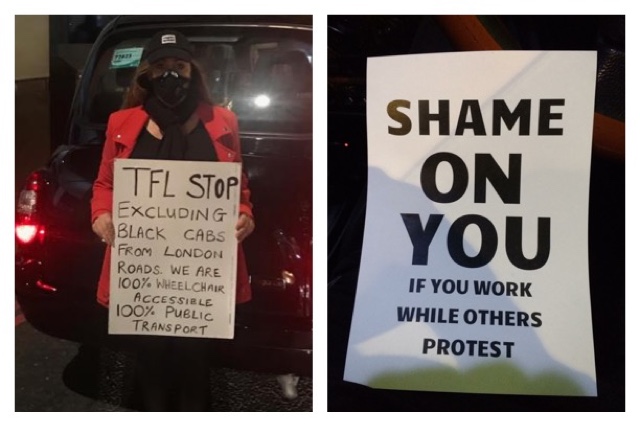 The public were handed excellent leaflets (designed by Sean Paul Day and supplied by the LCDC) which explained the situation in detail. On the whole the public seemed to be fully supportive....with the only anger shown to drivers coming from a couple of irate Lycra clad cyclists.
There were in fact a couple of incidents involving cyclists which to my eyes looked stage managed to try and cause trouble, but the behaviour of the cab drivers was impeccable and the two incidents I personally witnessed was dealt with rapidly by the CoL police. 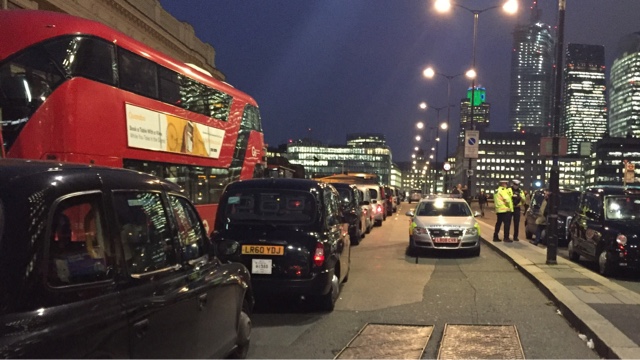 The drivers left a lane that could be cleared quickly for emergency vehicles.
The buses were being looked after by a number of TfL uniformed staff who gave me their word they were not compliance officers. To our amazement, the dozen or so  buses standing stationary for the duration, had their engines running (unlike the cabbies who had switched everything off).
The senior CoL office asked if there would be any more protesting from the Taxi trade in the City this week and seemed to be taken by surprise when we explained that this was to be a week long daily protest. 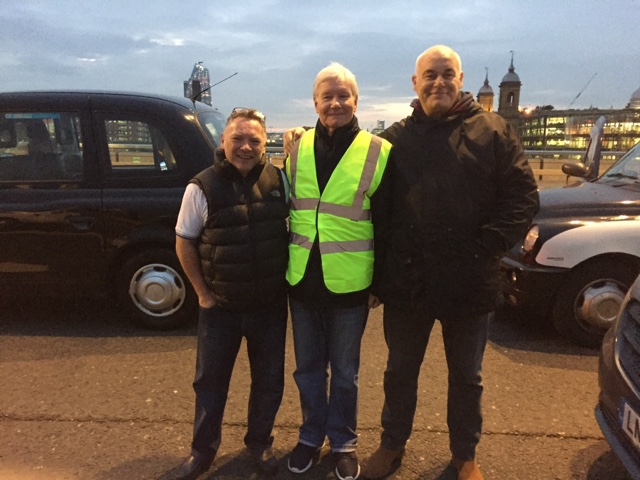 Obviously, members of the ITA were in full attendance, but it was also very nice to see so many younger/newer drivers getting involved, some on their first ever protest.
The days militant action was fully supported by the LCDC and the RMT, with their chairman/general secretary and most of their committee members in attendance. 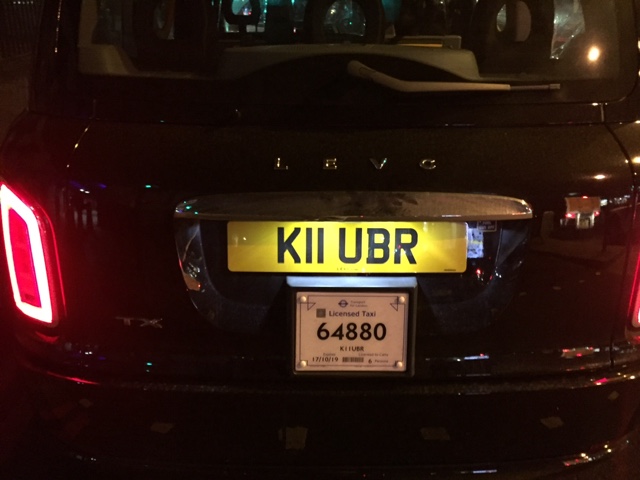 Strange through that a Taxi news platform, one who claims to be impartial and have the largest circulation on social media, decided not to post anything whatsoever about London Taxi driver's struggle for full access to the transport network.
Instead, they posted a story about a minor minicab demo in Milton Keynes, where drivers were protesting over an extra 20p commission on every job.
TAXI LEAKS EXTRA BIT :

The fight goes on, no more waiting and seeing!
The ITA announced after the days protest, it's more of the same again on Tues, Wed, Thurs, and Friday... And if the trades demand are not met in full, they will take stock of the situation and decide where to hit next week. 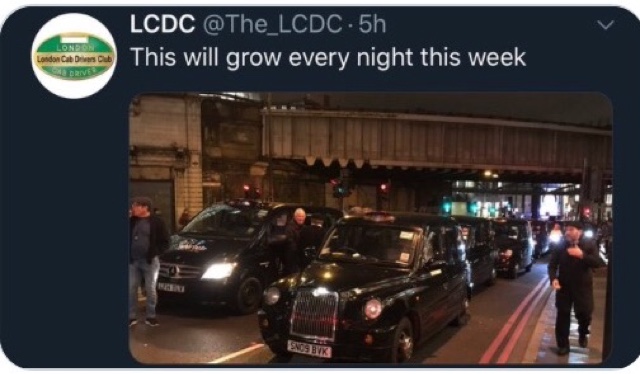 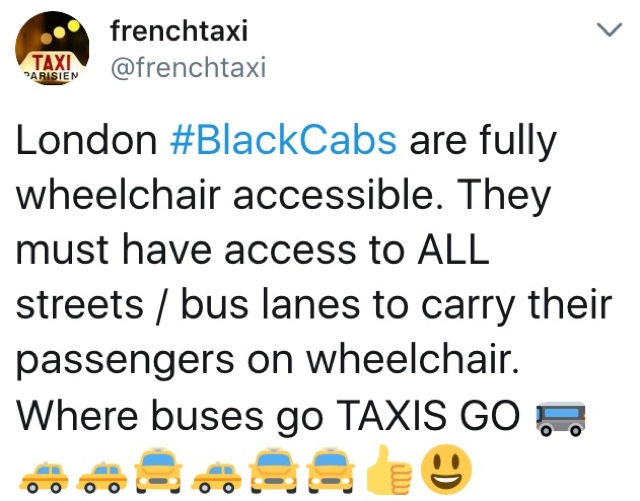 Well done guys. I am not a taxi driver or cabbie (I am a plasterer) and keep up with the crap that is going on via Taxi Leaks.
Please keep up the fight! All this BS from tfl and government affects all of us London workers, and blocking the streets is an excellent way to exercise non-violent protest.
I do not blame those black cab drivers who have not turned up, 'they' have conditioned us all to fear fighting the system, but seriously, what else have you got to lose?
All in politics have let us down.

The thing that baffles me is we have Knolwedge examiners going around with the mayor of London trying to promote the Knolwedge yet TfL are trying to ban us .??? It’s a shame we don’t have any comment from them or them evening going on strike or have they been silenced if you ask me something very fishy is going on and it’s not looking good

All well and good ...But blocking bridges and pissing the public off isn’t the solution ..Absolutely no coverage on Tv and and very little coverage on radio..Need to find another way to protest with greater impact..

Anon 11:19
Well what are you doing about it???
It's all very well to diss off the action but it's the only tool in our box.
No demos get media coverage less they turn violent are are part of a government conspiracy.

Don't just comment what we are doing is wrong, tell us what we should be doing and start organising it !
You'll soon find hi hard it is to put anything else together.

Demos are the only string on our bow at he moment as our largest org is benign.
The LTDA do not represent the Taxi trade, they represent TfL

TfL refuse to engage in minuted meetings (supported by Steve Mc) and Mike Brown will only meet with Steve Mc cause he knows Steve is on side with him.

As for pissing off the public....you should have been on the bridge and spoken to the public who are 95% in support of this particular action.

We need access to every road and routes that buses have access to
We've tried engaging, it don't work
We've tried waiting and seeing, we lost the bank junction
We've tried the political route, it hasn't worked

Direct action protest is all that's left to us.

Fair comment ! And yes your right I don’t have the answer..good luck and respect.

at last we,re doing something,lets hope its kept up,"londons open for buisness" well london bridge wasn,t,whos side are you on mr mayor?