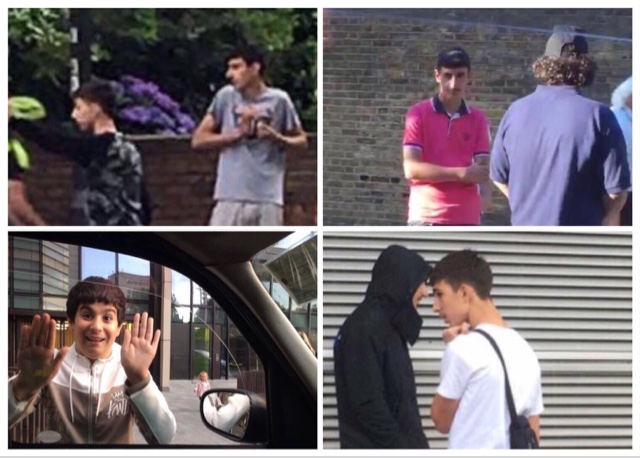 Yesterday saw uproar on social media from the London Taxi Trade. Another driver, violently mugged for a few pounds in his money bag. 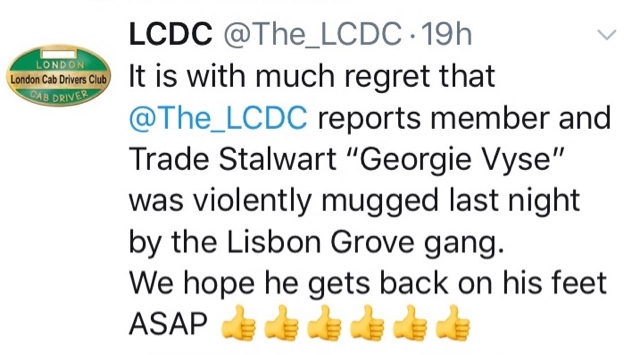 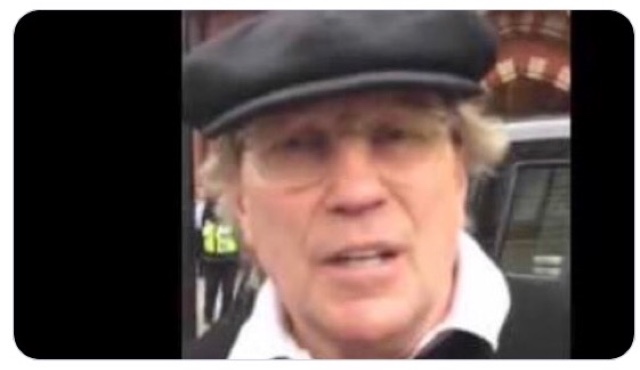 After three years of this gang mugging their way through the Taxi Trade, there are now calls for vigilante’ groups to set up honey traps from within the rank and file drivers.
The police at present appear to be ignoring calls from desperate drivers who have been attacked and in some cases are refusing to attend.
We had one driver who phoned 999 after being threatened by an attacker with acid. After being held on the line for 20 minutes, he was told that they didn’t have anyone available to attend the scene.
But as sure as eggs are eggs, if someone were to call the police and say that a group of London Cabbies were harassing three young Arab looking children.... the police would turn up by the coach load and the possibility of drivers losing their bills would be a sure bet, with police spokesmen in the media saying we can’t have Londoners taking the law into their own hands!!!!!
Drivers must not ‘tool up for protection’ you will lose your licence if caught with any type of weapon in the cab.
But where are our largest trade org on this problem????
Have they again dcided to 'wait and see' ???
Not a word in their inhouse publication, not a word from their online platforms.... and yet this org’s management is mainly made up of ex-police officers ????
Our representative orgs and Unions must demand action today from the police.
It is unacceptable that our trade is being subjected to these dangers, with virtually no response or protection from authority.
RINGING 101 IS A COMPLETE WASTE OF TIME, DON'T BOTHER...ALWAYS RING 999.
Trade leaders must seek immediate meetings with the Mayor and police commissioner and demand action!!!
CRIMES AGAINST TAXI DRIVERS HAVE BEEN SLIPPING DOWN THE LIST OF PRIORITY OFFENCES UNDER SADIQ KHAN.
This isn’t a new problem to our trade, this gang (labelled, the Lisson Grove Gang) have been mugging their wY through the Taxi Trade for over three years.
More recently, the gang have extended their operational area from just around Church Street/Frampton Street Edgware Road....to Pread Street, Finchley Road, Marylebone Station, Park Lane, Piccadilly and Knightsbridge.
There appears to be two groups:
First group at younger and use diversional tactics to distract the driver allowing other members of the gang to snach property such as mobile phones, money bags, satnavs.... 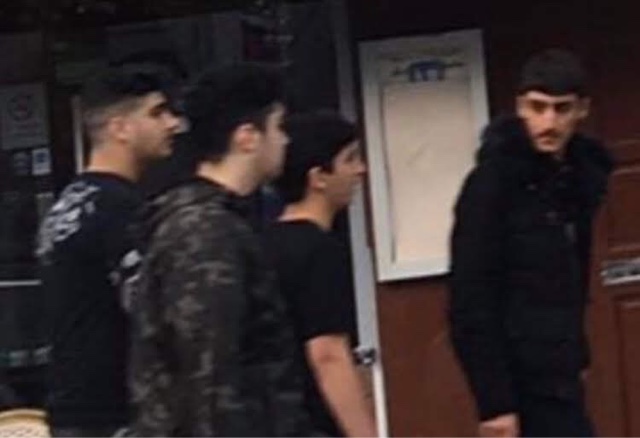 Second group are older and use violence against the driver.
They know who the door locks work and at open windows, put their arm inside, unlock and open the door. Drivers have been dragged out of their cabs and assaulted. 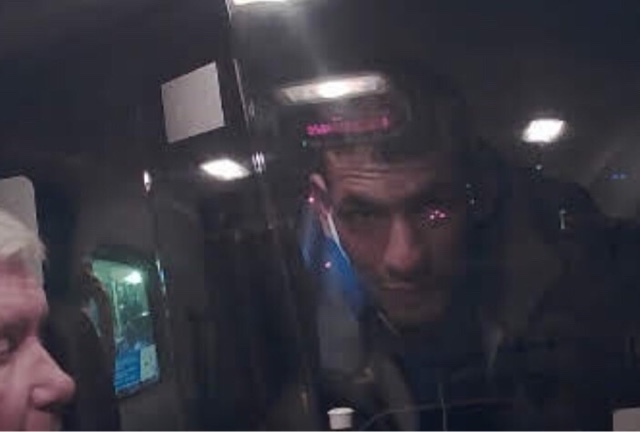 THIS CANT BE LEFT TO GO ON UNCHALLENGED.
The only protection we have at present :
Be vigilant by being aware!
* keep the doors locked
* Never open the window more than is needed to hear destination
* If approached and asked to get the ramp out, wait until you see the wheelchair, then turn off the engine and remove keys, manually lock the front luggage door, lock the drivers door... before getting the ramp ready.
* Only deal with passengers through nearside window if possible and never open the drivers window more than a couple of inches.
* Never get out of the cab to deal with these gang members (a bilk is better than being violently mugged)
These are dangerous times on our streets and the only protection we have at the moment is our own vigilance. 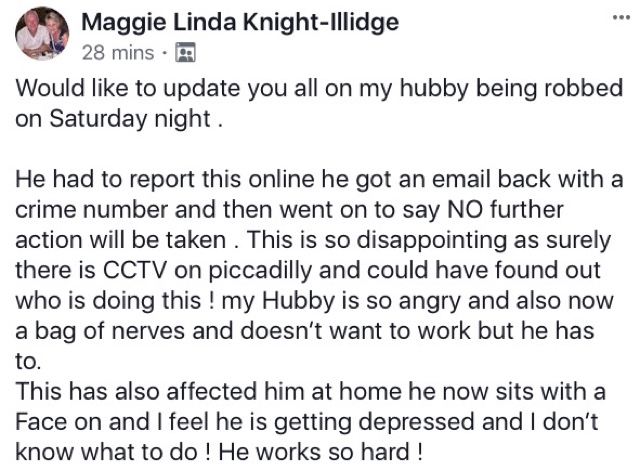 TAXI LEAKS EXTRA BIT : Deputy Mayor For Transport....Missing Person ?
Taxi Leaks has been informed that the Mayor and deputy Mayor for transport have said they at naval able to meet with the Taxi Trade????
The LCDC will circulating this poster to drivers 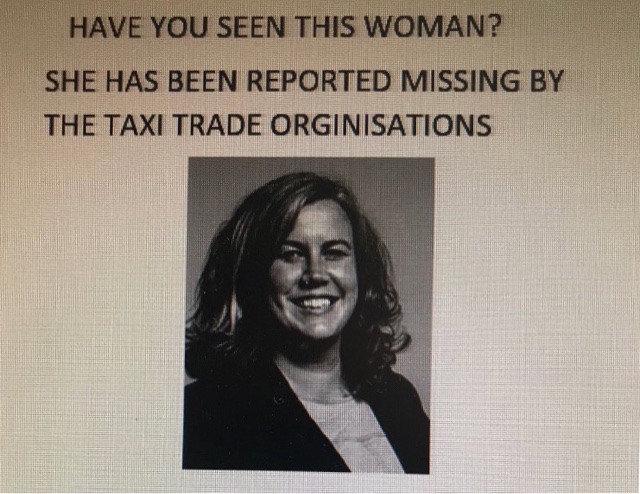 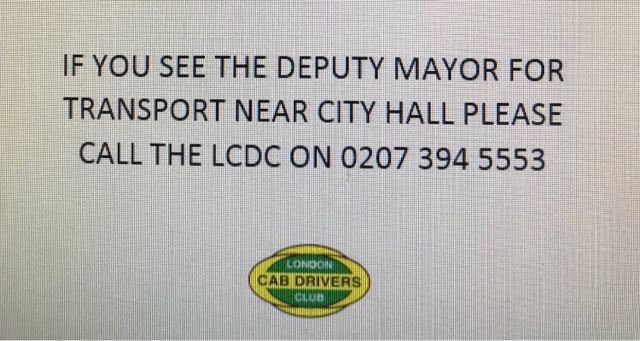 The LCDC asks the questions!
Heidi, may I ask you what exactly is your transport remit?
Have you seen the Bloomsbury disgrace?
You should be at the forefront in stopping the emissions & congestion mess we are experiencing. 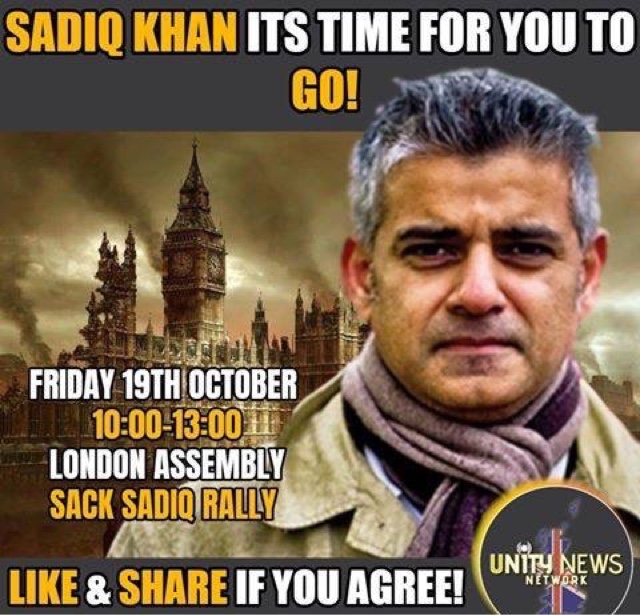 This sort of thing has happened before, about 20 years ago there was a spate of ram raids against taxi drivers. I know as I was a victim, rear ended by stolen car, then attacked. I put up a good fight actually taking one down however I did wake up in hospital with very swollen head. Lucky to be alive really since the perpetrators were later found shot dead. Trouble is with this sort of crime is that it encourages more to do it when some get away with it. Remember in a life or death situation you are allowed to do what is necessary including the use of vehicle to escape even if you run them over.

Unfortunately my dog has passed away. Some may remember I used to take him out with me. A Good Belgian Mali. I raised him as a pup. We used a sleeve to do various taxi attack scenarios. He was such a good dog and the friendly passengers enjoyed and loved him since he was extremely sociable. However one time I was attacked via the passenger window. The attacker not realising the dog was there didn't come off to well, but the police were delighted by the outcome. I wonder if the licensing department would approve, at the time I am sure mine knew and didn't seem to mind or just ignored the rumours. Miss my dog!

"best job in the world"..."greatest city in the world"...You can keep it thanks..Chucked my badge in the bin when it expired...Moved out of the cesspit, retrained in another job..No regrets.

And the best police service in the world! bla bla bla,,,,,,,

When I see the police hanging about the airport to catch taxi drivers for the heinous crime of overanking and waiting in newell road, it makes me feel so safe driving down Lisson Grove and I a reassured they are dealing with rising crime.

biggest trade org?aren,t a few of them ex coppers?,would appear ones to busy drinking and driving, and wasn,t another kicked out the force for beating his old woman up?