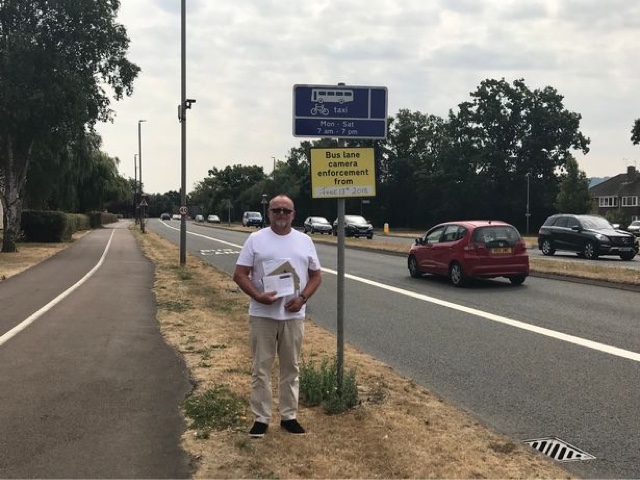 Graham Foley, with a bundle of warning letters sent to taxi drivers, by the bus lane camera on the A40 in Cheltenham(Image: Copyright Unknown)

Hundreds of warning letters have been sent to taxi drivers because they drove in Cheltenham bus lanes - even though they are perfectly entitled to do so.

A mix-up means the letters have been sent to drivers of taxis and private hire vehicles by APCOA, the company dealing with traffic enforcement matters on behalf of Gloucestershire County Council.

So even though those vehicles are exempt from a ban on general traffic using the bus lanes, and also Boots Corner, newly-installed cameras have captured their registration details and letters have been sent out. They have warned the owners of the cars that they were illegally driving in the areas and would be fined £60 if they did it again

Graham Foley, owner of Dial-a-Cab in Cheltenham, said it had been alarming for his drivers to receive the letters, which must have cost the tax payer a lot of money.

The new camera overlooking the bus lane on the A40, by the Benhall roundabout, has been in use since late last month. A new camera monitoring traffic at Boots Corner has also been operating since then.

Mr Foley said it seemed APCOA had sent out letters to hundreds of taxi drivers, telling them they had been spotted driving in the bus lanes at Benhall and in Albion Street.

He said drivers working for his company had been sent 100 and therefore he thought the total number sent out had been about 1,000.

He said: "The biggest thing about this is the phenomenal waste of money and that is council tax payers’ money."

He said APCOA should have been sent a comprehensive list of taxis that are allowed to use the bus lanes and Boots Corner.

And he believed the county council could easily have got that information from the district councils in Cheltenham and surrounding towns and cities, which are responsible for issuing taxi drivers with their licences.

A spokeswoman for the county council said: "APCOA now has a full list of exempt vehicles from all district councils across the county and is working hard to upload them on to the system.

"We’re sorry for this delay and would like to reassure taxi drivers that this was a short term mistake and will not be happening moving forward."

Posted by Editorial at 4:32 PM