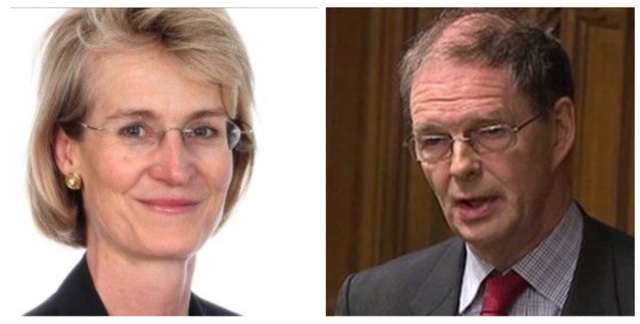 Emma Arbuthnot.            Husband Baron James Arbuthnot
Day two of Uber's licence appeal, the court heard from Uber's QC that in their opinion they haven't been operating illegally (even though this has been proved in two previous court cases and was confirmed by Tom Elvidge yesterday. They also denighed that they have been dispatching 2 million jobs illegally on a weekly basis for the last six years. (Also confirmed by Elvidge).
Senior District Judge (Chief Magistrate) Emma Arbuthnot, who's husband ex Tory MP and front bench minister, now Baron James Arbuthnot-thanks to close chum(ocracy)  David Cameron- had to decide if the decision by TfL not to relicense was right or wrong. She has to decide today if Uber are fit and proper.
As the gallery filed back in the Judge started talking about booking process.
Elvidge accepts it was false.
She then said "I have to find if this was deliberate, it would be unfair if I found on dishonesty without hearing from those involved but Uber painted a force picture".
The decision:
Uber granted 15 month short term licence pursuant to complying with a list of conditions.
How predictable...
According to the LTDA Twitter feed, the Magistrate was overawed by the scale and worldwide interest in this case, standing up to a $70 billion dollar company was just too much for her!
Unbelivably she has gone against all the evidence and granted Uber a 15 month breather.
Not unexpected the LTDA went from being "an interested party" to "its not our case it's TFL's"....

This verdict has stunned the London Taxi and private hire trades.
Over 100 London cabbies and have been handing their badges back to TfL over the lady 18 months.
Hundreds of Private Hire operates have been put out of business, not being able to compete with Uber's subsidised predator pricing.
British justice at its best???
Or as Mr Bumble said when being removed from his parochial office "If that's the law sir....then the law is a ass. If that's the law sir then the law is a bachelor. And all I hope sir is the law learns by experience......by experience sir.
Is there a case for a class action for compensation to drivers who've had their legitimate work stolen illegally over a six year period???
Uber employee lied on oath...
TfL directors lied to the London Assembly on multiple occasions...
Even after complaints, TfL allowed Uber to carry on operating from an unlicensed operation centre until they applied for a licence variation...
TfL directors and managers hid illegalities and swept damning statistics under the carpet on a regular basis.... 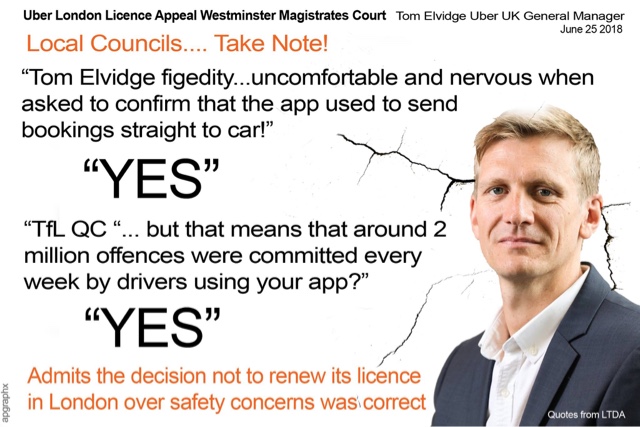 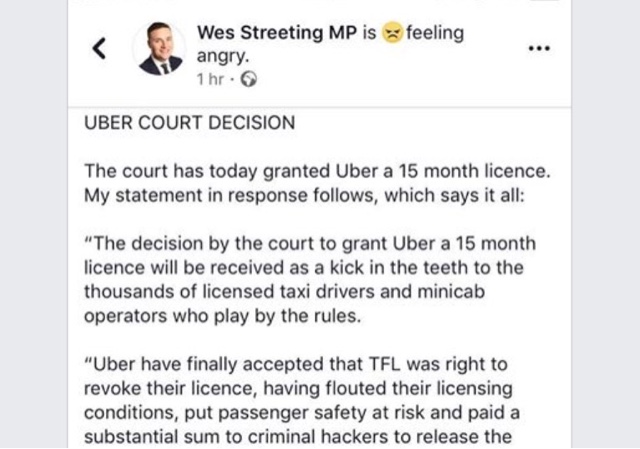 Wes Streeting MP on FaceBook.
TAXI LEAKS EXTRA BIT :
As a final f@@k you to the British justice system, Uber have agreed to pay TFL's legal costs of £475,000.

Never heard of a losing party being awarded ćosts before!!!
So TFL's legal team...who affectively lost this case, the same team who lost the meter case, and lost the case against Diamond chauffeurs, still get weighed off with 475 large for a few days work.
Looks as if Uber are helping to fill TFL's billion pound short fall in this year's budget.
Who said you couldn't buy friends....lol. 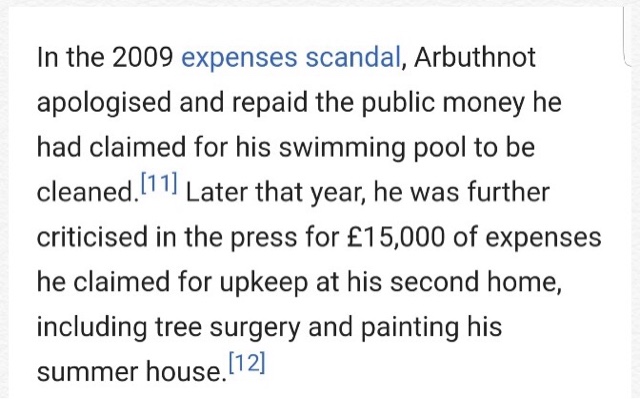 Posted by Editorial at 5:40 PM

I believe that the origins of the Llicenced London Taxi (Hackney Carriage), came about, 400 years ago under Oliver Cromwell, because of the goings-on of Highwayman and the need to protect the travelling public, both in safety and monetary terms - unfortunately, we've now gone FULL CIRCLE - I wonder what, Harry Feigen, Monty Shiman, Phil Phillips, etc., would be saying & doing now? that's if, they'd have ever have let things, have gone this far!

I believe that the origins of the Llicenced London Taxi (Hackney Carriage), came about, 400 years ago under Oliver Cromwell, because of the goings-on of Highwayman and the need to protect the travelling public, both in safety and monetary terms - unfortunately, we've now gone FULL CIRCLE - I wonder what, Harry Feigen, Monty Shiman, Phil Phillips, etc., would be saying & doing now? that's if, they'd have ever have let things, have gone this far!

wankers the lot of ya.....disgraceful

We been Done by the conservative corrupt cnuts, well done anyone who voted for them, now maybe we can get the legal action started !

The judge married to the tory baron,,,,what a load of crap, you couldn" make it up, well done anyone who voted for these tory corrupt cunts

the ltda should stop their softly softly tactics and send in the "flying santas"these intrepid souls would dress up as santa claus,have their photos taken outside hotels that used mini cabs then go back to taxi house,