With Morale At An All Time Low, Has The Fight Gone Out Of London's Taxi Trade ?....by Jim Thomas

RWhen we've had problems in the past with minicabs touts forming their own ranks outside clubs and bars, and because of TfL’s lack of enforcement, drivers took it upon themselves to do something about it. 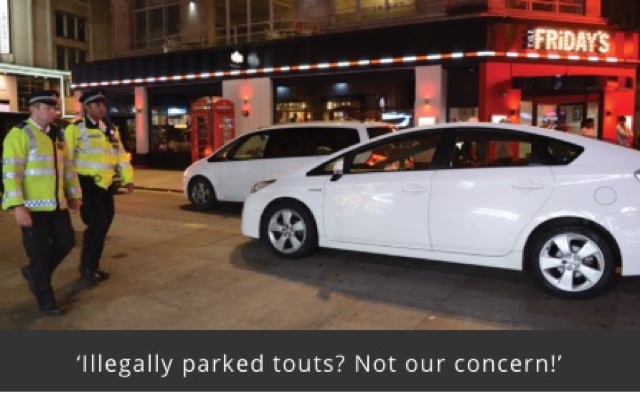 Tiger Tiger and the OnAnon bars were surrounded every night by Minicabs claiming that had the right to rank outside because Dismond Cars held a satilite office licence. Disgruntaled Cabbies felt enough was enough, and so reformed hit squads -groups of vigilante Taxi drivers-  which proved to be very effective.

As the illegal minicab ranks started to appear outside clubs and bars, hit squads blocked in the touts and took back the work. The militant groups of drivers stopped the work being stolen.

Back in 2014, troubles re-emerges and so black cab drivers again took the law into their own hands by targeting illegal minicabs in London's West End. The problem was highlighted in the BBC  Inside Out programme. (See video below) 'How Safe Are Your Taxis' produced for the BBC by Manami Szymko.
"London's Taxis rated the safest in the world"... Says BBC's Louise Hulland.
Cabbies again formed squads, the most militant being ‘The TaG (Twitter Action Group) Hit Squad. track down illegal drivers and roadblock them, as they seek to preserve their night-time trade.

By the end of 2015, we saw the rise of the more organised hit squad (The Mayfair Mob) Their action in itself, saw many more ranks appear. Drivers showed a black cab presence was required outside restaurants and bars such as Hakassan, Nobu, Novikovs, The Arts Club and Forge in the City Of London.

Sitting on Taxi ranks at stations, hotels, bars and restaurants, Cabbies are seeing black cabs (most with livery from Gett or MyTaxi) pull up and spirit away jobs that should be going in the waiting Cabs plying for hire on the rank.

We’ve even seen Minicabs working on the same app (Gett) as Taxis!

One Taxi garage owner has recently removed Gett livery from all his rental Cabs and the London Cab Drivers Club (LCDC) have refused to carry Gett’s adverts in their Badge publication.

Things are starting to come to a head with reports of violent arguments outside bars and restaurants, not between Taxi drivers and touting Minicabs, but between ranking drivers and Gett and MyTaxi drivers.

The silence from our largest orgs is deafening !

TAXI LEAKS EXTRA COMMENT: by Lenny Etheridge
I find it increasingly difficult to believe anyone, especially Org leaders and reps, cannot grasp the genocidal ramifications of unregulated apps.
Trade reps who accept unregulated apps, are willing coconspirators of this trade's demise.
Ends
TAXI LEAKS EXTRA BIT:
ITS ALL GOING TO GETT UGLY AT HEATHROW:
It has now been bought to our attention that HEATHROW airport is about to introduce a turn up and go service later this summer, to facilitate the increase in app pick ups. Drivers on prebookings from Gett, MyTaxi, Addison Lee and Uber, will be allowed to go straight to terminals to pick up. 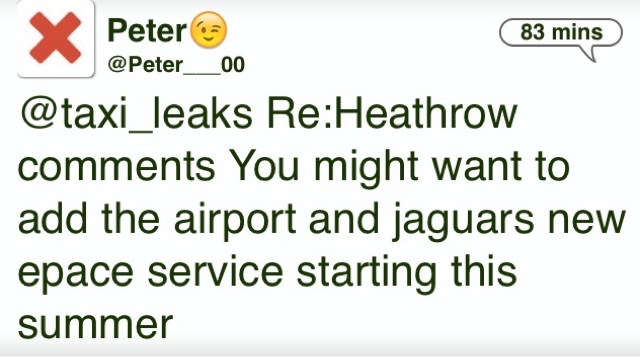 Again, we will be seeing drivers on these Taxi apps jumping the queue and taking work away from drivers already doing five hours in the feeder park.
Will Jaguars be added to the Gett app, to replace the Porsche promotion....driven by Minicab drivers recruited from One Transport ?
A sort of one tier service heralding things to come? 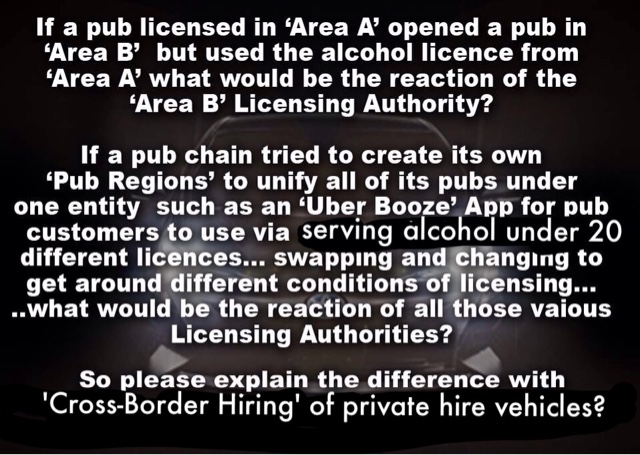 No real surprise. The trade has always only ever been supported by a few good men doing their bit for the majority. The work while others demo brigade, and im all right jack mentality is the norm. Most drivers would sell their soul to the devil for a few extra quid a day.

In answer to the question, yes, im afraid we might as well get the white flags out, the games over, we have lost the battle, as for anyone paying 65 grand plus interest for a new cab, i feel for you, the fight does seem to have gone out of most drivers i talk to on the ranks, theyre not really interested in any demo/battle talk, just trying to get enough money in to pay back out again for the cab rent, meter, overhaull, tax, roadtax, insurance-twice if you were unluky enough last week or fortnight, upkeep, aa, bill, and 4% of any card job to the city bankers, you couldn"t make it up, the games over, we lost, just remember who knifed us in the back people, it was the conservatives, suprise suprise, always remember that in the future when they come knocking for your vote, it was the CONservatives,,,,,simples really!

Apart from a few odd occasions, we've never had much fight that's why we're in the position we are

Unfortunately well beat custard last stand any fight has all but gone across the UK fighting corruption was never a winner money wins every time in this could have been a great uk .the public only see what's on the meter and have always felt ripped off and it will take a long time for them to realize it is the fixed rate that Will cost them good luck to them and who knows their job may be next after all who would have thought a phone could wipe out years of training

What do we pay our subs for? Now the airport reps are quite happy to sit in the feeder Park for hours on end and watch their members work go in PH.