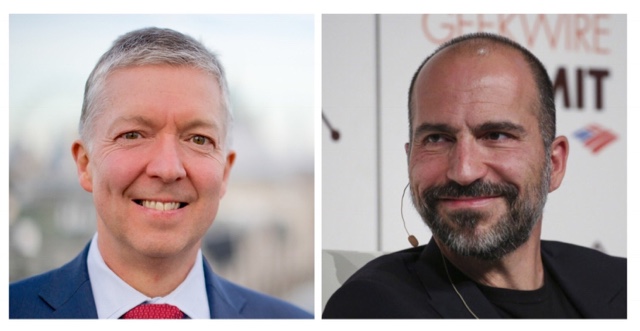 LONDON (Reuters) - London’s Transport Commissioner Mike Brown met Uber [UBER.UL]boss Dara Khosrowshahi in January, a freedom of information request revealed, as the Silicon Valley app fights to keep its cars on the streets of its most important European market.

Uber is battling a decision by the city’s transport regulator last September to strip it of its licence after it was deemed unfit to run a taxi service, a ruling Uber is appealing.

Since then Uber has made a series of changes to its business model, responding to requests from regulators, including the introduction of 24/7 telephone support and the proactive reporting of serious incidents to London’s police.

Khosrowshahi flew to London in October for discussions with Brown after which Uber promised to make things right in the British capital city.

The pair had a second meeting in London in January, according to a response to a freedom of information request from Reuters.

“The Commissioner met with Dara Khosrowshahi on 3 October 2017 and 15 January 2018, both meetings took place in London,” Transport for London (TfL) said.

A TfL spokesman declined to provide an immediate comment on what was discussed at the meeting. Uber declined to comment.

Reuters had asked for a list of every meeting which had taken place between Uber and TfL’s private hire team and/or Brown since Sept. 22 but TfL declined to release such details.

“We are not obliged to supply the remainder of the information requested in relation to meetings as it ... relates to information where disclosure would be likely to prejudice the exercise by any public authority of its functions ..,” it said.

A court hearing over Uber’s appeal is due this month before the substance of the appeal is heard in June.

So we have the commissioner of TfL refusing to meet with representatives from the licensed Taxi Trade for 8 months. When he finally did, he said they couldn't discuss Uber as they are appealing TFL's licensing decision, and it would be sub judice.

But apparently it's OK for this commissioner to have two secret sessions with Uber's CEO...and that not sub judice?

We keep being told that Mike Brown is on side.....but the burning question has to be.....who's side??? 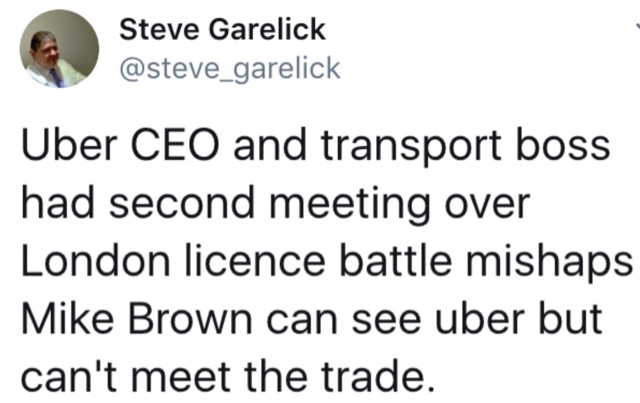 After this latest outrage, shouldn't our trade leaders be kicking down Mike Brown's door on Monday morning ???

Posted by Editorial at 6:16 PM

Uber licensed to rape.
Mike Brown needs to be dealt with now

He does not seem to want to meet stakeholders on the private hire side either,
Strange I have to agree.

Every occasion I see a picture of the grinning gimp that is mike brown I get the overwhelming impression of how similar he looks to a little chipmunk, are those teeth real. When his picture appeared by the side of khosrowshahi ( can we just call him daza or kosh) I couldn't help but smile and think how much the Iranian/yank looks like a grinning wolf just about to devour the gurning chipmunk. Brown is so far out of his depth you have to wonder how he got the 'top spot' at the toilet on Blackfriars road. Then again so little seems to make sense these days,(not only the taxi market). Companies able to pay abnormally low wages only for governments to top them up. A house rental sector at insane levels because the gold standard pension industry was reduced to dust by Gordon brown hence everyone became a landlord with an eye on retirement, a government policy which seems to allow huge (particularly American) companies a 'hands off' pay no tax approach because you are a large employer of people (admitedly many low quality jobs), a high street in free fall yet councils still impose a Stalinist approach to parking enforcement thereby further driving customers away to shopping malls (another American invention) so slavishly adopted by this country. However the crowning glory of insanity must surely be Uber. Nine years down the line, 20/30 billion in losses. Thousands of small taxi firms sent into oblivion, existing regs just simply shredded and discarded. Deadly serious criminal acts committed (rape and murder),traffic movement virtually brought to a standstill and no realistic sign of profit. Just what and when will Uber make sense, other than to be a provider of a second class service at unrealistic and unsustainable prices with drivers who,lets be frank, are unlikely to know one end of a tax return from the other.

It's about time we had a secret meeting
Getting people in from outside the trade to deal with these spineless wankers.
Just one visit and there world would cave in.
Start getting real before we go down the toilet.

it"s a race to the bottom thanks to these con cnuts and the deluded people that voted for them!