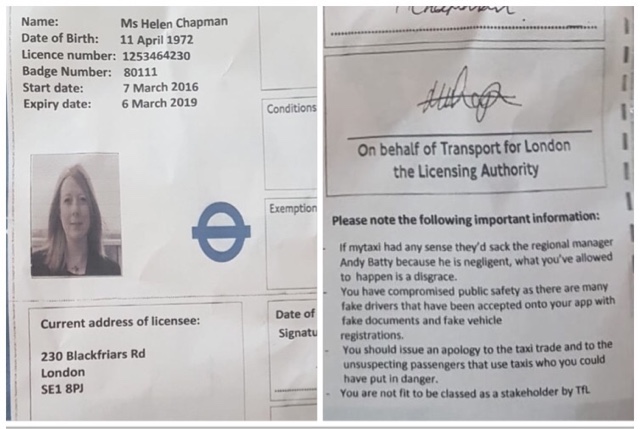 TAXI LEAKS EXCLUSIVE :
Taxi Leaks acquired evidence that a Taxi drivers bill (licence) bearing the name of TfLs Helen Chapman, has been accepted onto the MyTaxi platform, even though it gives the address of 230 Blackfriars road (home of TFL's Taxi and Private Hire administration centre.)

In addition to naming one of TFL's directors, on the bottom right hand corner of the licence, it carries a text passage saying that the regional manager of MyTaxi should be sacked for allowing this breach of security.....and yet it was still accepted on to the platform.
Below is the welcom email, sent out to the fake Helen Chapman driver. 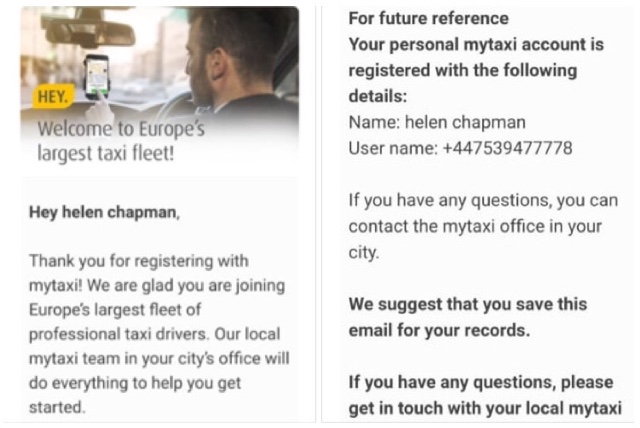 In addition, we have also been sent evidence that a serial rapist jailed for life, has not only been uploaded on to MyTaxi, but also had actual jobs recorded/accredited to his account.

Prolific rapist Delroy Grant was accepted staight on to the platform without question even though his address was given as 21, Du Cane Road (the address of Wormwood Scrubs prison) and has been authorised to pick up passengers through the app.

We have been given proof below  that a journey was booked for Delroy Grant to pick up.

This evidence has massive security implications and could be used by enemies of the London Taxi trade to tarnish our good name.
Taxi Leaks believes that the MyTaxi app should cease trading until it can fully guarantee the identity of all its drivers.

We received this information on Sunday night but were asked not to post as the people involved were trying to arrange a meeting with the MyTaxi CEO. We have now been informed that a meeting has been refused and that so far, MyTaxi has failed to issue a statement...

Once again, the lid has been blown off instant hail apps, but this time, unfortunately,....it's one of our own.

The MyTaxi platform has a gapping security hole, which allows dodgy, photoshopped, un-vetted Taxi licenses to be uploaded, to work alongside genuine Licensed Taxi drivers.

Just how many fake licenses have MyTaxi taken onto their app?
Is this the norm with other instant hail ride share apps?
We ar told by the instigators of this action that there is still plenty more to come out! 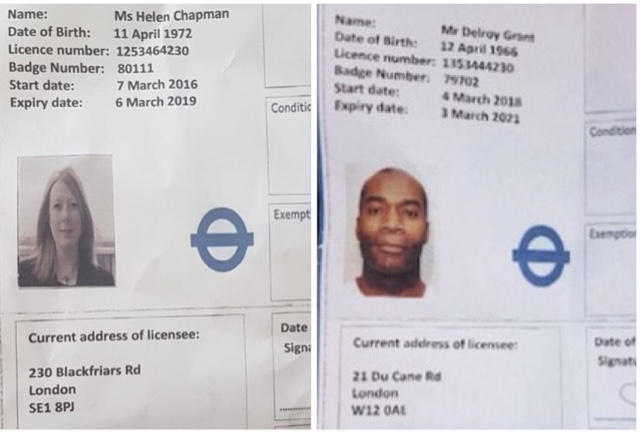 Moreover, MyTaxi might look as if it is there to help the cab trade, but they are on record claiming “Our competition is the street hail”. That’s a challenging proposition for the average cabbie: join MyTaxi and find yourself working for the unofficial opposition. Worse, as TfL have pointed out, it “does not licence MyTaxi or any other company offering similar taxi services via an app or radio circuit”. Obviously, private Hire is different.

TAXI LEAKS EXTRA BIT :
TfL continue to show an unwillingness, to police these Taxi/Ride share apps.
It's like the Wild West out there with these companies making up their own rules and regulations on the fly.
TfLTPH have no appetite to enforce their own regulations and legislation laid down by parliament.
It's scandalous they way they have swept aside their duty of care to protect public safety, leaving un -the licensed Taxi trade- to self police and publicise the current unsafe nature of these app journeys.

Someone has to speak up for Public Safety.

Do we matter at all?

Licensed London Taxi drivers are as safe as houses!

Transport Apps are not safe.
Apps need a regulator.

The silence from Orgs and Unions, especially those with newspapers and magazines, is deafening.

If any of our Orgs or Unions put advertising revenue before Public Safety, they are no better than the corrupt politicians and brazen TfL execs they pour scorn on.

The same goes for any driver who wants to sweep this dangerous situation under the carpet, because it might affect their app work.

Here's news for you, you're not earning more on an app than on the street.
You've just learned to rely on it.

Principles are not for sale.

I've said before and I'll say it again
When these scum mike brown etc gonna be dealt with.

Any cab driver even the ones with very small brains must realise the way to take back control is
Come off all these corporate apps i.e. Gett & Mytaxi.
Go on taxi app for drivers by drivers.
If we were all on taxi app the work would follow
People want to use us and they don't care what app button they press.
Use your brain have a bit of forsight and do the right thing.
Stop working for corporations who don't give a shit about you your just a cash cow.
Wise up before we all go down the pan.
Gett and Mytaxi drivers are uber drivers
How long before your paying 20% or more per job
There parasites feeding off your back there not business men there parasites nothing more.
My dog knows more about the cab game than them.