City Of London To Try To Fool Commonwealth Heads ...Will You Answer The Call And Seize The Days?

London Taxi drivers are up in arms as the City of London Fathers admit the closure of the bank junction to traffic other than bus and cycles, could potentially put the heads of the Commonwealth gathering in London for the government forum in grave danger !
Because of the fear that the Commonwealth heads could be in danger, stuck in the utter gridlock and pollution of the surrounding areas....in their wisdom, they (the city fathers), have decided to re-open the Bank Junction to all traffic....but only while the Commonwealth heads are gathered here in London for their forum.
They obviously want to give the false impression that all is well in the City..... But, we know that's far from the truth.
As soon as they leave, the CoL will resume the Bank Junction scheme again and the pollution causing gridlock will be reimposed on the citizens of this once great city.
Seize the day,
Will the Taxi trade unite and take this opportunity to demonstrate against the unfair, unjust Bank a Junction scheme?
The ball, as they say, is in your court ! 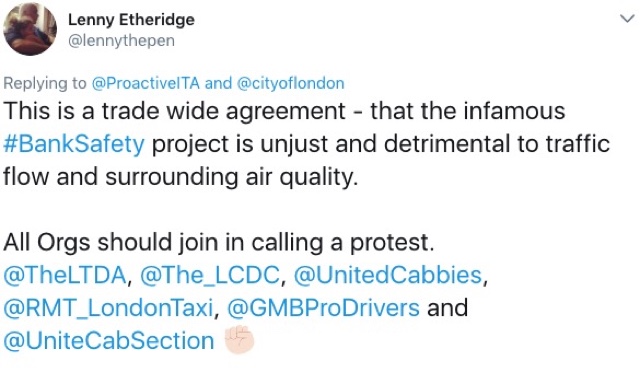 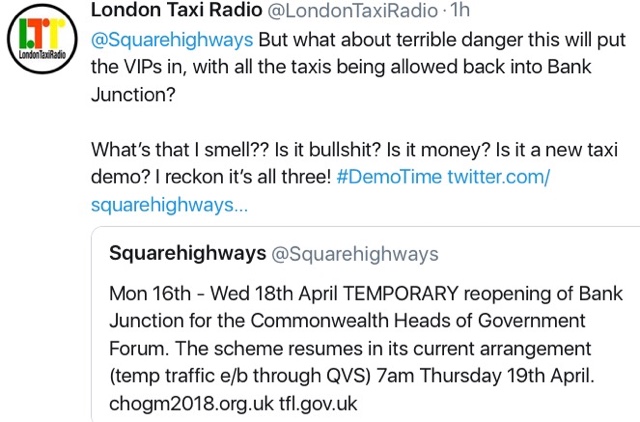 First Trade Org to come forward with support for the ITA's proposals for protests in the City of London is the London Cab Drivers Club (LCDC)
Chairman Grant Davis had this to say earlier today:
"So the issue over “Public Safety” is ignored for the 3 days?
What hypocrisy!
I am sure our members will be supporting any action that is called by the ITA."
Posted by Editorial at 4:30 PM

Surely an opportunity like this will make enough people get off their ar5e5 and show their feelings about the closures. Nobody else will do it for you.

Its the perfect opportunity to highlight the problem we face every day, and if we hold up a few very important people, all the better!

when we going to take some court action like the two cabbies did? I mean a joint action, top lawyer, all chip in?

REMEMBER ITS ALL ABOUT THE NEW WORLD ORDER, CITIES AROUND THE WORLD ARE BEING TURNED INTO CONTROL ZONES WERE YOU HAVE NO SAY WHAT GOES ON , YOU ARE TOLD WHAT TO DO AND WHEN TO DO IT , THEY DONT CARE ABOUT WHAT THEIR CITIZENS THINK, ITS ALL ABOUT THE ONE WORLD SUPER GOVERNMENT!!! AND THATS WHAT YOU ARE UP AGAINST, ITS TIME TO WAKE UP

Anon 3.30
Get are the NWO
12.5% delete the app today go on taxi app
Take control back of our own destiny.
Get off get cancell your LTDA D D.
London is the NWO world capital.
The internet is going to be there downfall
Can't hide the truth anymore.
Take control not only of the taxi game
But the whole sorry country.
There days are numbered just study history.

Just been informed by a reliable source that McNanara has told the UCG they can’t get involved in any action at the Bank Junction
If they do, it would jepodise their special relationship

Dump you rubbish at the bank junction
Treat the city of London with the same contempt they treat us.
Fuck the lot of em.

Yeah, fuck em, and all that nonsense about us being the fourth emergency service and doing a first aid course, probably at a cost to ourselves, what a load of bull! Why drivers are still in the ltda and voting con baffles me!