Mother Tells Of Nightmare Moment When Uber Driver Took Off With Her Baby On Back Seat.

Driver collected two more jobs, before the second passenger informed him he had a baby on the back seat. 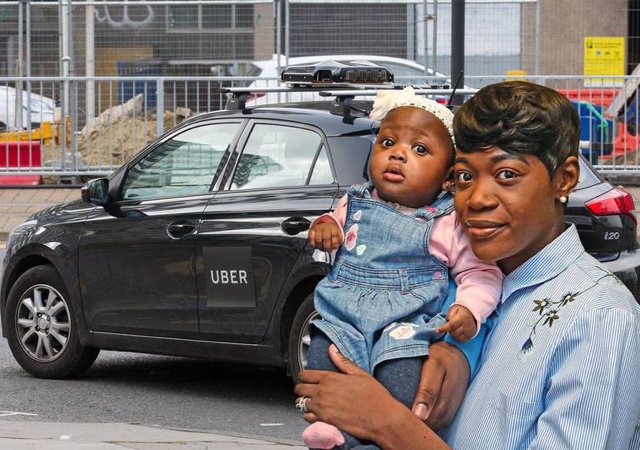 A mother was left screaming in panic after an Uber driver accidentally drove off with her seven-month-old daughter in the back of his car — and didn’t realise for almost an hour.

Elisabeth Katompa, a nurse, had visited her mother in Enfield with daughter Olivia-Hope before taking a minicab home to Tottenham with her sister. When the car pulled up outside her home just after 11pm, Mrs Katompa and her sister got out.

As they made their way to the other side to unstrap the sleeping baby from her car seat directly behind the driver he set off, oblivious.

“My sister and I chased him down the road and he didn’t even know that we were chasing him,” said Mrs Katompa, 31. “We couldn’t catch up with him

The pair called 999. Uber has a lost property service brought text that allows drivers to be contacted but it's not a phone number... Mrs Katompa said: “The panic that I was in… I was screaming and shouting and what-not. I called the police because that was the only thing I could think of.”

When officers arrived she showed them her email receipt, which had the driver’s first name but not the numberplate. Without further details, police said they could not immediately track the driver down.

(Funny that, we've been led to believe that all journeys are can be tracked on Uber's system....is that another of their lies???)

“I got so worried because you hear about things like that happening when someone just takes a child and then you never see them again,” Mrs Katompa said.

The driver had meanwhile accepted another fare, a man who did not question the sleeping baby’s presence. “He didn’t say anything,” Mrs Katompa said. “Maybe he assumed she belonged to the driver.” (Well, they are cheap)

Only when a second fare asked the driver if he was aware of the baby did he realise what had happened.

He took her to Bishopsgate police station, about five miles from the home Mrs Katompa shares with her husband Oliver, 31.

“One of the officers on the radio said someone had just dropped a baby off at the police station,” Mrs Katompa said.

“The police blue-lighted us to the station. I was just hoping it was her... I was hoping that she was well. I was worried that it wouldn’t be my baby. I just wanted to see her. It was scary.”

When Mrs Katompa got to the station she was reunited with Olivia-Hope, who was asleep. “She wasn’t aware of anything that was going on and the officers were taking care of her,” she said.

Uber said it was the first time such an incident had happened. It added: “We normally hear about drivers finding mobile phones or keys in the back seat of their car but never a sleeping baby.

"As soon as the driver and a following passenger realised what had happened they drove to the local police station to safely reunite mum and baby.”

The Met said it was called at about 11pm on Saturday to reports of a missing baby. It said: “Officers responded and made urgent enquiries to trace the vehicle.

"Just after 12.10am, the driver attended a central London police station to report a baby in his car. The baby was reunited with her mother.”

No crime was recorded. Mrs Katompa said: “I’m still shaken up by it. Even when we got home, I didn’t want to let go of her.”

So there we have it, even with the drivers name and a receipt for the Uber journey, the police had no way of contacting the driver through Uber as Uber still don't have a landline.....remember that little thing that Leon Daniels told the GLA they definitely had.

We also know that although they advertise the fact that passengers are safe because all journeys are tracked in real time by GPS...this is in fact another Uber lie, as if you are worried about the safety of a friend, you have no way of contacting Uber directly.

It never ceases to amaze me how low people will go to get there hands on some dodgy money while stabbing people in the back!!! HOW DID WE EVER REACH THIS LOW POINT IN THE UNITED KINGDOM ? I CANT WAIT FOR THE DAY THE POLICE GO KNOCKING ON THERE DOORS TO ANSWER QUESTIONS REGARDING CRIMES AGAINST THE COUNTRY AND ITS CITIZENS ( AND THEY WILL )

Is this why the Tory's keep cutting the police,so they do not have enough manpower to investigate the Tory's & their bent ways.