IGNORANCE IS NOT BLISS. IT’S BLOODY WORRYING! IS THIS THE HIGHLY TRAINED STAFF, MAYOR KHAN PROMISED 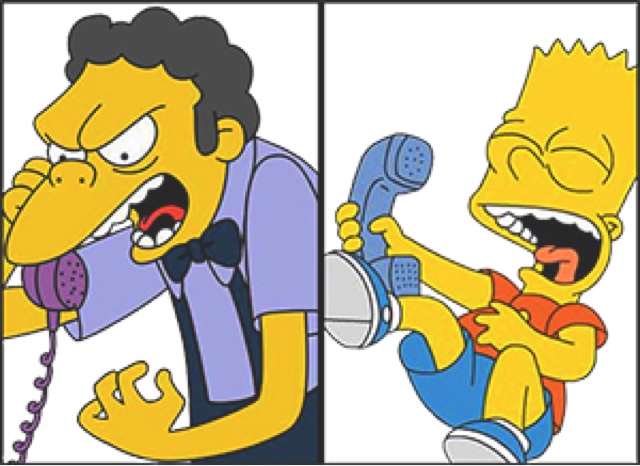 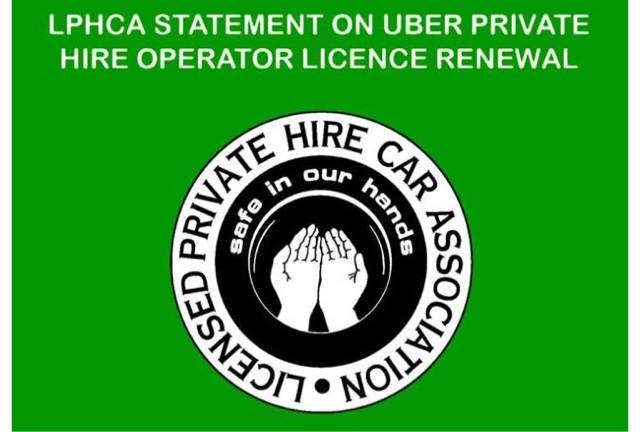 Like many interested groups, as reportedly stated by Mr Kurten AM at the Plenary Session, we have long expressed apprehensions about the poor practices of this business and its structure.

Over the past few months our concerns have been strengthened by numerous publicly reported events.  These include:

Further to the above, Uber has been subject to ongoing questions about its working practices, driver engagement and payment of tax.  Uber drivers have also been successfully prosecuted by Transport for London for carrying passengers without proper insurance.

This followed a complaint, from a Licensed Private Hire Car Association member, that one of their vehicles was being used uninsured by a driver for Uber work.  The lack of robust documentary checks raised additional consternation as to regulatory compliance.

Transport for London also successfully prosecuted Uber London Limited on the charge of Causing or permitting a person to use a motor vehicle on a road (or other public place) without a policy of insurance.

Modernisation of transport services is, we accept, a necessary progressive step but it should not risk public safety or the reputation of the wider licensed private hire trade.

In adding our support to the London Assembly motion, the Licensed Private Hire Car Association calls for Transport for London not to renew Uber’s private hire operator licence on 30th September 2017. 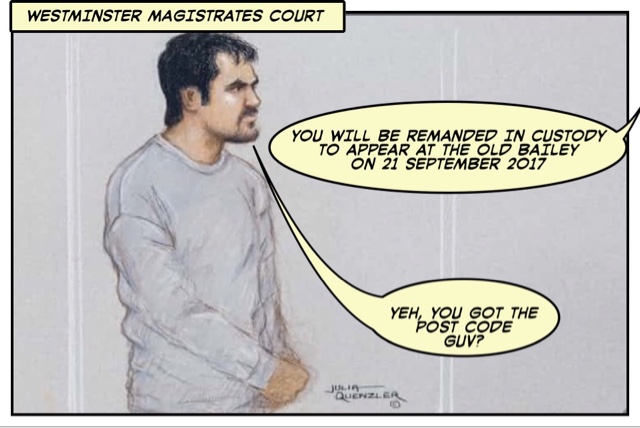 You really couldn't make it up.

Buckingham Palace Samurai sword waving terrorist Mohiussunnath Chowdhury, decided to unleash his own brand of terror at the Royal residence of Windsor Castle.
But as he lived in Luton, had no topographical knowledge of Central London -where incidentally, he 'was' licensed by TfL to work as an Uber driver- he entered Windsor castle into his Uber sat-nav. But like many Uber journeys undertaken by drivers with absolutely no knowledge of London, he ended up at the wrong destination, many miles away from where he had intended to go.
Instead of arriving at the Royal residence of Windsor Castle, he actually arrived at a London Pub of the same name. 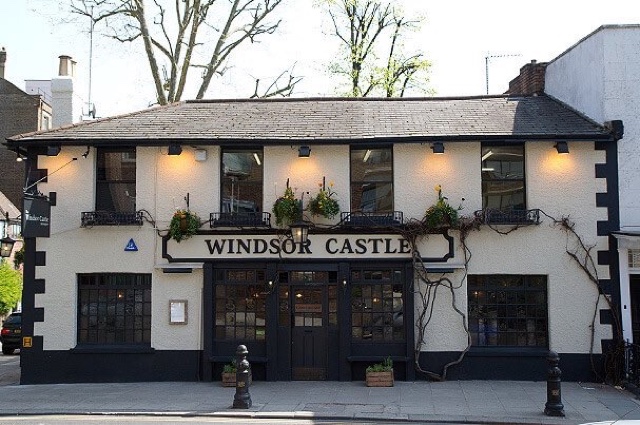 Below is the court report from the Guardian, it reads like the script to a sit-com.

It is alleged that Chowdhury, 26, who works as a self-employed Uber driver, had set off from his Luton address about two hours before his arrest and he used his satnav to try to drive to Windsor Castle. After he arrived at a pub of the same name, he drove on and eventually ended up near Buckingham Palace in central London.

He is alleged to have then driven towards a marked police car in a blue Toyota Prius at just after 8.30pm on Friday and stopped. During the incident, he was sprayed by police with CS gas and arrested.

Chowdhury, who wore a grey tracksuit and spoke to confirm his name and address, was remanded in custody. He will next appear at the Old Bailey on 21 September.

This case really does beg the question,
How many more potential terrorists are out there hiding behind a TfL roundel? 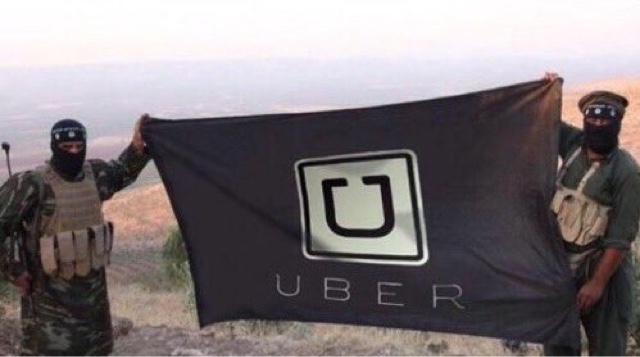 Posted by Editorial at 4:43 PM No comments: 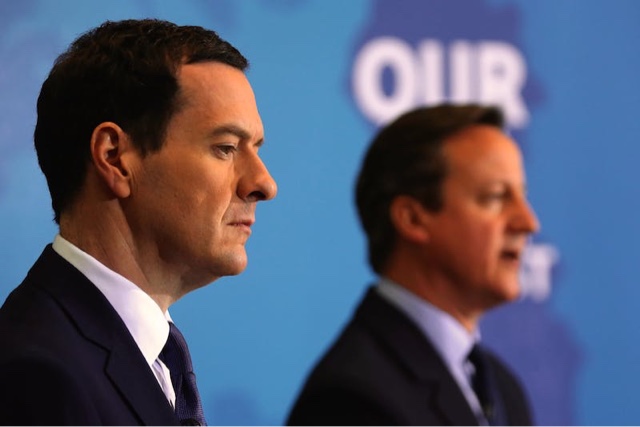 Uber is set to start rebuilding its reputation after a summer of scandal. It just needs a couple of weeks without any bad news — for example, that the Department of Justice is taking “preliminary steps to investigate whether managers at Uber Technologies Inc. violated a U.S. law against foreign bribery.”
That’s the bombshell takeaway from a new Wall Street Journal report, which alleges that Uber may have violated the  Foreign Corrupt Practices Act. The FCPA makes it illegal for a US person or company to bribe a foreign government for favorable treatment.
The WSJ doesn’t know which country (or countries!) may have been the recipient of bribes, but given Uber’s rapid expansion and general disregard for the rules, the list of possible places is nearly endless.
This isn’t the first bad news Uber has had from the government. A separate investigation is reportedly running into a program called Greyball, which Uber used to evade regulators in cities where it was operating against local regulations.
Under former CEO Travis Kalanick, Uber expanded at speed, but left a trail of destruction and bad PR in its wake.
It frequently moved into a city before it was allowed to by local regulation, started up with low cost to get the local population on board, and then waged a public publicity battle to get its service legalized to some degree.
In the process, it frequently operates on the edge of the law.
Because of its drivers’ status as contractors, rather than employees, it would be drivers having their cars seized. Uber would appear to be untouchable and able to conduct its business with little consequence. 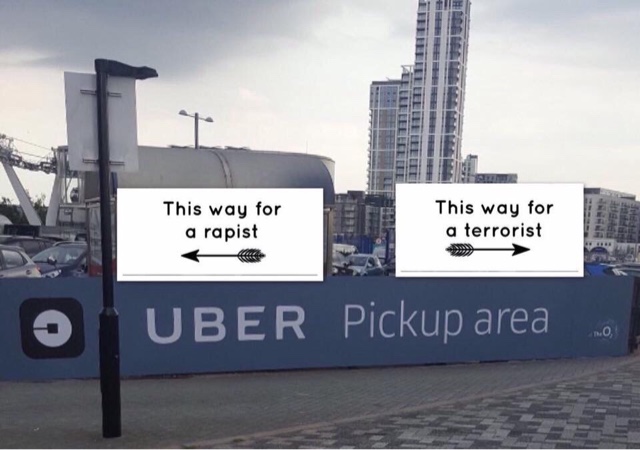 TAXI LEAKS EXTRA COMMENT:
Meanwhile, back here at the O2 in Greenwich, round the corner from the TfL Riverwalk Building, Uber have been given a pick up waiting area....or as we call it, a rank
Source : BGR
Posted by Editorial at 11:31 AM 2 comments:

Unconfirmed Reports Have Been Posted On Social Media, That The Factory Building The New Electric Taxi Has Burned Down

The London Electric Vehicle Company (LEVC) made this statement on Twitter at 12:30'pm today. Their new factory in Ansty, where the TX is located was unaffected. 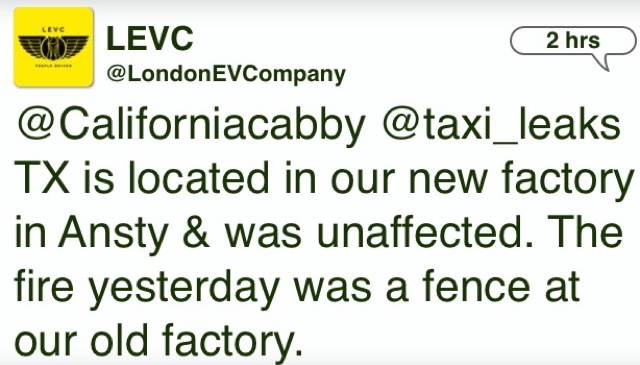 The fire yesterday evening was a along a boundary fence at their old factory. 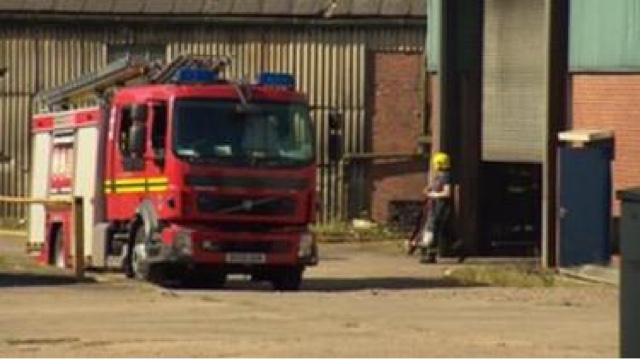 More than 40 firefighters have tackled a blaze at a disused factory in Birmingham.

The A41 Birmingham Road had to be closed earlier between Halfords Lane and Middlemore Road.

Jim Sinnot, from the fire service, said wood and cardboard inside the factory was ablaze and investigations into the cause are now taking place 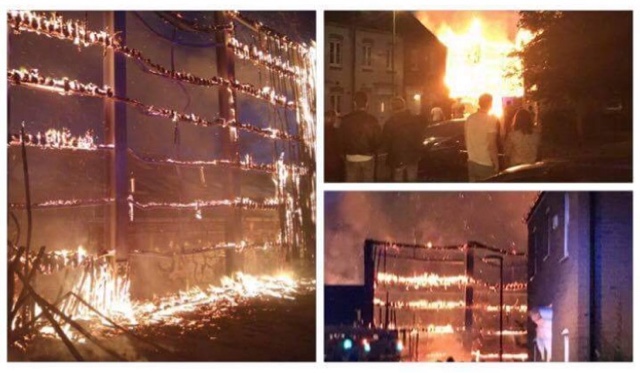 From The Coventry Telegraph :

The cause of a blaze which saw a 10 metre high fence engulfed in flames in an alleyway behind the LTI factory is this morning being investigated.

The fire started around 8pm and crews didn't leave until 11pm.

The alleyway is between the factory in Holyhead Road and Duckham Court and the fence acts as a sound barrier between the two.

Pictures have emerged of the fire lighting up the night sky.

New details are emerging this morning of what happened last night.

Stay with us for the latest updates and the morning news and travel.

As daylight emerged this morning, it was clear what damage had been done to the fence.

It is clear from the video how much of the fence has been burnt to a shell.

Piles of debris have now been left on the ground where it fell.

Sparks fly from flames during blaze

Sparks were flying from the flames which were reaching dizzying heights above the houses.

The fence was ten metres high, and there has been a lot of damage to the fence.

Remnants of the fence this morning

The first pictures of the damage done to the fence are emerging.

Around 15-20 metres in width has been burnt to a shell.

There is debris around the site and the cordon which has been set up by fire service is still in place.

Some of the beams are hanging off the frame of the fence.

Firefighters worked for more than two and a half hours last night to bring the blaze under control.

Two crews were on scene, one from Binley and one from Coventry - good work to the firefighters who stopped it from spreading.

The second photo shows sparks flying as the fire dies out and remnants of the fence can be seen.

We have reporter Enda Mullen live from the scene.

The fence is already well ablaze by this point but with their quick work, they tackle the growing flames.

How high is the fence?

The fence which has gone up in flames is in fact around nine to ten metres high.

Flames from the blaze towered over the houses on the estate behind the factory at the height of the fire.

The flames have engulfed the area and were reaching heights higher than the houses.

No roads are closed

Although the alleyway is closed, there are no road closures in place that we know of.

We have a reporter going to the scene this morning where we will find out what damage has been done.

The alleyway where the fire started is this morning cordoned off.

It is currently being treated as a “hazardous area”.

Watch Commander Forrester said: “We have this morning cordoned off the alleyway where it happened.

“There are metal beams which are hanging down and although they are secure, if there is a big gust of wind they could potentially cause serious injury.

“It is cordoned off as a hazardous area and whoever responsible for the fence will be clearing it up later today.”

A fire which broke out behind the LTI factory in Coventry last night is being treated as suspected arson.

Coventry Fire Station’s Watch Commander Ry Forrester told the Telegraph this morning that the fire started in an alleyway between the LTI factory and the housing estate behind it.

He said: “We got there just minutes after the first crew arrived.

“It started in an alleyway between the housing estate and the LTI factory, but the ten metre fence caught fire.

“We are treating it as arson.”

Posted by Editorial at 1:32 AM No comments:

After Week Of No Comments, Palace Knife Attacker Finally Outed In Court As Uber Driver. 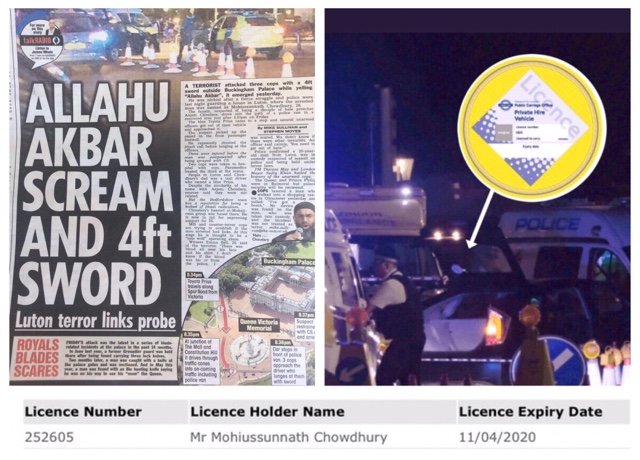 Last week, after the Palce knife attack, the main media failed to make any mention or connection, of the terrorist/attacker being an Uber driver. They also failed to mention he was driving a TfL registered Minicab.

But today the news has finally been posted on the BBC news web spite. 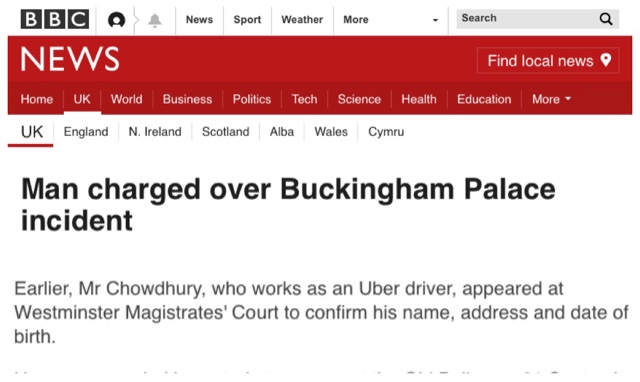 News today that Chowdhury was in fact an Uber driver has now started to trickle through to the Nationals, which is extremely bad news for the eHail app.

So now we have both the Leytonstone slasher and now the Palace knife attacker, both confirmed working for Uber. That's along side the confirmed 48 sexual attackers and rapists.

For the past week, TfL have again protected their partners 'employee', refusing to comment on whether Mohiussunnath Choudhury was licensed as a PH driver at the time of the attack. 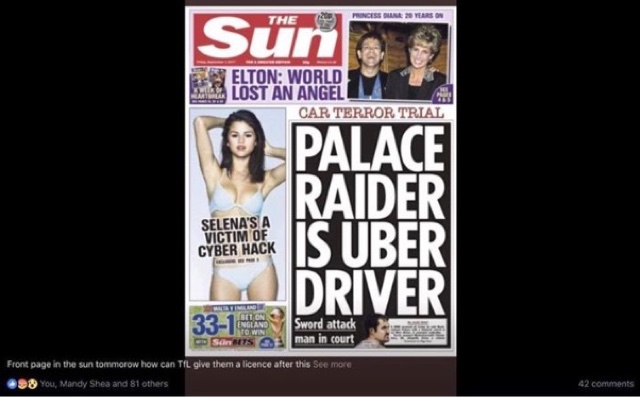 Independent checks have shown that TfL had a driver registered by that name on the day after the attack.... but this licence (number 252605, expiry date, 11/04/2020) has now been removed from the TfL licence checker database. 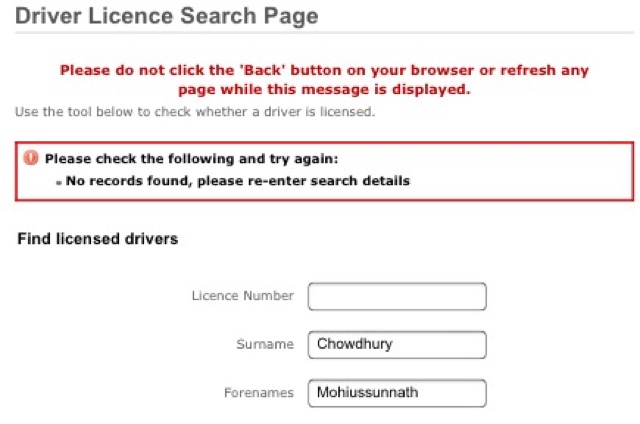 TfL Compliance teams (COs) have been demanding Taxi drivers on ranks, remove copies of Taxi newspaper because -in their words- the headline is misleading to the public. 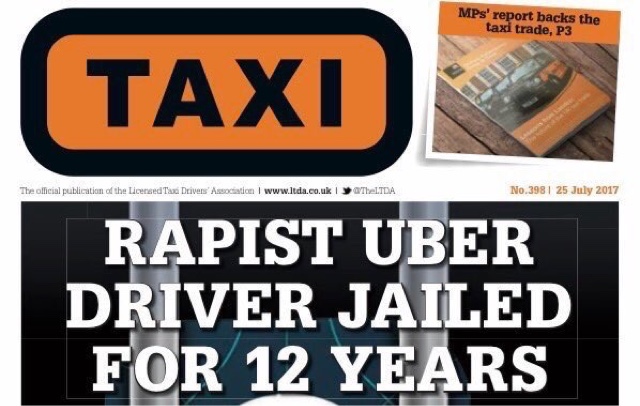 TfL are now pointing to an obscure notice put out in 06/2014. Which dealt with uncomplimentory signage (Totally failing London stickers) aimed at TfL failure towards the Taxi trade.

It's scandalous the way TfL bend over backwards, refusing to answer Taxi trade questions and in some cases refused Freedom of Information requests made on behalf of Taxi representative groups.

In a recent tweet, the London Cab Drivers Club pointed out they had to wait five months for TfL to reply to an email.

The man who was arrested near Buckingham Palace armed with a 4ft sword has now been formally charged with a terror offence.

Three officers suffered minor injuries in the incident after he allegedly drove a vehicle at them just after 8.30pm on Friday and then reached for the sword.

Choudhury, from Luton, will appear at Westminster Magistrates' Court later on Thursday.

He faces the charge of engaging in the preparation to commit an act or acts of terrorism on Constitution Hill.