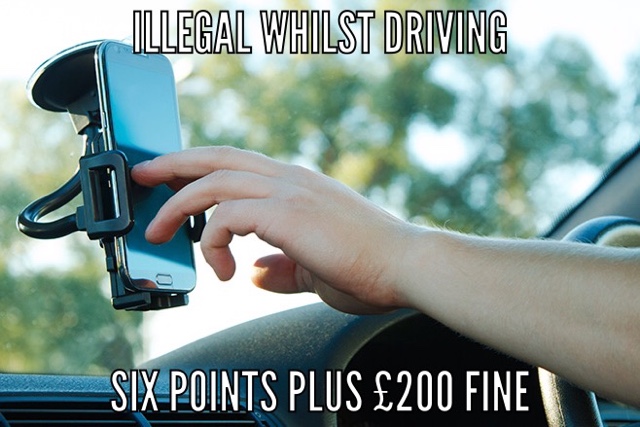 New laws will be coming into force on Wednesday.

We've asked TfL for a statement, as to how this affects drivers using SatNavs or driver Apps.

Could they be putting themselves at risk to a £200 fine plus 6 penalty points, leading to an eventual ban.

All we've had back so far is this tweet from TfLTPH.

We have had to get information from Nottingham and Essex Police forces.

Basic changes are 3 points to 6 points and you mustn't so much as touch the phone at any time, while the key is still in the ignition.

New laws will come into force from March 1 which will see the penalties for mobile-using motorists double - meaning people can be handed six points on their driving licence and a £200 fine. In more serious cases, police can also prosecute drivers for careless or dangerous driving.

Since 2003 anyone caught using a mobile phone while driving faced a £100 fine and three penalt points.

Motorists will no longer be offered the opportunity to go on a driver awareness course once the new legislation comes into force.

The change in legislation can lead to an automatic ban for young and newly-qualified drivers as they could risk having their licence revoked following a first-time offence.

Police say while it has been illegal to use a mobile phone held in the hand while driving or while stopped with the engine on since December 2003, there has been a worrying shift in attitudes to mobile phone use behind the wheel.

The RAC surveyed 1,714 motorists and 31 percent of them said they used a handheld phone behind the wheel compared with 8 percent in 2014.

A spokesman for Nottinghamshire Police said:

"Don't risk the penalty points and fine, or more importantly, endanger yours and other peoples' lives for a telephone call or text message; it can wait."

MOBILES AND DRIVING : ALL YOU NEED TO KNOW!

Can you use your phone at traffic lights?

No. Even when you're stationary it's still classed as driving and you are still in charge of the vehicle so using your phone in traffic or at lights is still an offence.

Can you press buttons on your phone to answer/hang up a call on hands-free?

No. The phone must be secured in a holder out of the 45-degree angle of the driver's view. You can't touch it while driving.

Is it OK to answer a call while driving if your phone is on loudspeaker on your knee?

No. It's still classed as using your phone while driving whether it's in your hand or not.

Can you use your phone as a sat nav?

Yes – as long as you programme it before you start the car and set off and it's in a holder out of the 45-degree angle of the driver's view. You cant re-programme or touch it while in motion, the same rules apply for any sat nav.

Surely these new rules will greatly affect driver apps such as Uber, Gett and MyTaxi as you will only be able to interact while the Taxi/Minicab is stationary ?

Also, Surrey police have informed us that you cannot have anything fixed or stuck to the windscreen in the areas of the wiper sweep 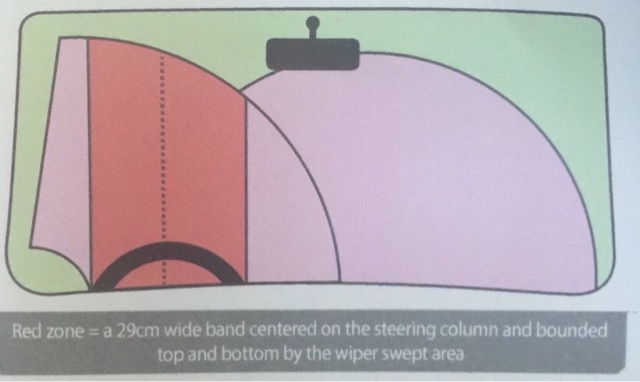 This means that the front Credit Card Stickers are illegally sited under current TfL directions.
We asked TfL for a statement on this and believe it or not, this was their reply.

So there you have it from the horses mouth....
'The stickers should be fine!!! '
But will TfL be paying the fine if we come up against a stroppy traffic cop?
This reall isn't good enough, as we deserve to know if we are committing an offence!
This just goes to show how incompetent our licensing authority really is.
Posted by Editorial at 4:39 PM

So Uber will carry on regardless no doubt.And we need clarification from all the taxi apps,who will be liable,driver or the firm ?.

Probably illigal to turn hire light off on the rare occasion you get a job ??

So if we leave the cc stickers on the windscreen we get nicked by the police.

And if we take them off we get a stop on the can by TfL.

Rock and a hard place?

Look upon this as an opportunity. Who has most to lose here? Every cyclist will be posting videos of Ubdr drivers using their phones and satnav. It's time most of you got a bit more exercise.

on TWITTER I see the SURREY POLICE are saying that, should we need to translate eg a Post Code, we need to: pull-over, park-up, turn-off engine and remove ignition keys

will they now please tell me, anywhere in London, I can do this, without getting a PCN, through the post, a week later, some draconian amount?

Not a problem --- all sorted with voice recognition.

Do the Police have to follow the same rules, the radio there use is a all in one unit mobile phone and police walkie talkie ?
There fore-ever turning the volume up/down !