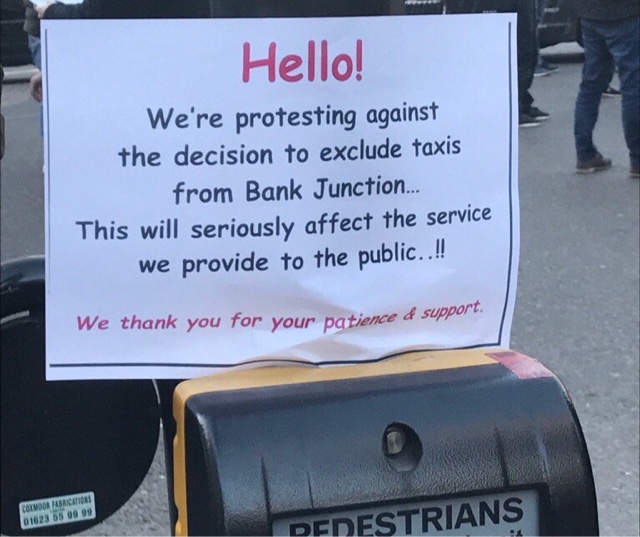 DAY 5
For five days, the passionate driver led coalition of the Independent Taxi Alliance (ITA), with little or no support from the leadership of our largest org, led the police around the City on a cat and mouse chase.
They said Taxi drivers couldn't win anything on their own, but they were wrong. 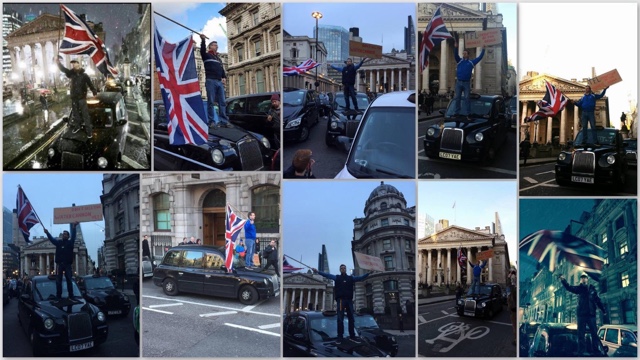 You'll never win they said!
What's the point in fighting ?
What's the point of demos?
Ignoring a problem will never make it go away!
We all remember what the late great Bob crow used to say:
"If you fight, I can't promise you will win, but if you don't fight, I promise you this, you will always lose".
Yesterday afternoon, at the completion of a week of demonstrations, Bob Crow's Union, the RMT, put out this statement:
BANK JUNCTION UPDATE
RMT have pursued dialogue with City of London regarding the ongoing dispute over Bank Junction.
The branch has successfully managed to secure a meeting with the corporation.
Details to follow.
In solidarity
Lewis Norton
Branch Secretary.
This is not the ultimate victory.
It's not the definite win...
NOT YET. 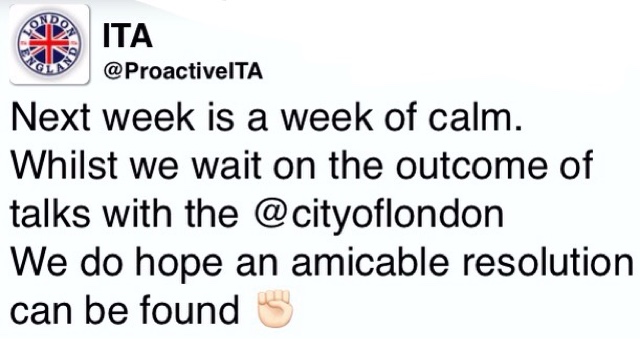 Without the fight, the standing shoulder to shoulder, the turning up day after day.... we had no chance.
But now we have that chance, and it's all thanks to you who cared, you who believed, you who attended.
It's not what's in your pocket today that matters, but what's in your heart for the future.
Its not about me, it's not about you,  it's about us and our future, a future together.
And now, we're in the race, we have a chance of wining
Warning strong language
Video by London Taxi Radio, artwork by Laura Henderson
Posted by Editorial at 5:24 AM

Full pressure needs to be kept up ,talking with these people is nothing without action,they're probably just trying to take the momentum out of the protests

I drove a high ranking person from the bank of England home last night.He was unsure about the week long demo in the City.I explained what is was about.imagine a person getting in my cab at Heathrow asking to be taken to the Bank of England.Its a rainy day in april and I manage to get as far as Queen street junction with Queen Victoria street EC4 owing to the closure of Bank Junction.Sorry sir I cannot get you any closer owing to the closure of Bank Junction.But I have a urgent appointment with the Governor Mr Carney.Perhaps you can give him a quick call and give me advice of how I can get you there without you getting soaked to the skin.
(The Bank of England Chief earns £874,000 per year with a £5000 per week housing allowance.Hardly a clear message that THAT LONDON IS OPEN FOR BUSINESS..Mr Kahn you are an idiot,and your transport Team headed by Leon Daniels and Garret Emmerson who have 16 bus directorships between them are going to Kill The CITY OF LONDON.
It would appear that if the High flyers at the Bank of England don't know too much about this closure WHO gave the City of London their support IF AT ALL

Yesterday, I stood there beside Paddy and I was proud to be a taxi driver again

Only the RMT supported the rank and file drivers who said enough was enough.

We all know our representative orgs normally won't support anything which isn't their own idea, as they want all the kudos for themselves.
Demos become recruitment campaigns and lose meaning.

Well now the other 4 have shot themselves in the foot

The ITA did the first ever 5 day demo, at St Pancras - and won.
The LTDA did their utmost to steal the glory from that driver led protest.

The ITA did Bank Junction. Another 5 day protest.
Win or lose, they tried. And they won't give up.

On both week long protests, the RMT were present and supported the demos.
In fact the RMT helped drivers from other Orgs.
The ITA paid the fines of two drivers, from absent Orgs, who were ticketed.

The ITA are driver led. Affiliated to no particular Org.
The ITA do not seek anything other than the rights of fellow Taxi drivers to be upheld.